Immune profiling of patients with COVID-19 has shown that SARS-CoV-2 causes severe lymphocyte deficiencies (e.g., lymphopenia, decreased numbers, and exhaustion of T cells) and increased levels of pro-inflammatory monocytes. Peripheral blood (PB) samples from convalescent plasma (CP) donors, COVID-19 patients, and control subjects were analyzed by multiparametric flow cytometry, allowing the identification of a wide panel of immune cells, comprising lymphocytes (T, B, natural killer (NK) and NKT cells), monocytes, granulocytes, and their subsets. Compared to active COVID-19 patients, our results revealed that the immune profile of recovered donors was restored for most subpopulations. Nevertheless, even 2 months after recovery, CP donors still had reduced levels of CD4+ T and B cells, as well as granulocytes. CP donors with non-detectable levels of anti-SARS-CoV-2-specific antibodies in their serum were characterized by higher Th9 and Th17 cells, which were possibly expanded at the expense of Th2 humoral immunity. The most noticeable alterations were identified in previously hospitalized CP donors, who presented the lowest levels of CD8+ regulatory T cells, the highest levels of CD56+CD16− NKT cells, and a promotion of a Th17-type phenotype, which might be associated with a prolonged pro-inflammatory response. A longer follow-up of CP donors will eventually reveal the time needed for full recovery of their immune system competence.
Keywords: SARS-CoV-2; COVID-19; convalescent plasma donors; immune profiling SARS-CoV-2; COVID-19; convalescent plasma donors; immune profiling

COVID-19, the disease caused by the Severe Acute Syndrome Coronavirus (SARS-CoV)-2, is a potentially fatal disease with approximately 20% of patients experiencing severe symptoms, 14% developing respiratory distress requiring supplemental oxygen, and 5% requiring hospitalization in Intensive Care Units (ICUs). Although it affects multiple organs leading to multi-systemic failure and often to death [1], COVID-19 is apparently related to excessive host inflammatory responses and thus, it looks more similar to a disease of the immune system [2]. Still, it is elusive how this new virus evades the immune system and escapes hosts’ immune surveillance, although some delineated pathways of invasion may be similar to mechanisms used by other coronaviruses [3].
Under the pressure to promptly reveal biomarkers predicting the severity of COVID-19 and thus assisting the clinical management of hospitalized patients, numerous peripheral blood cells and factors have been analyzed. Severe COVID-19 cases have been associated with significant alterations in immune cell subsets both quantitatively and functionally. Although studies to date were performed at diverse patient cohorts, they converge at the conclusion that COVID-19 patients exhibit early upon infection deficient production of interferons (IFNs) types I and III and increased serum levels of pro-inflammatory cytokines (interleukin (IL)-6, IL-1β, tumor-necrosis factor (TNF)) in contrast to the classical anti-viral immune response mounted against other coronaviruses [4]. Consequently, pronounced lymphopenia (i.e., low numbers of CD3+ and CD4+ T cells, particularly of the Th1-type and regulatory T cells (Tregs); very low numbers of CD8+ T, B and natural killer (NK) cells) and T and NK cell exhaustion (e.g., reduced expression of CD26; increased expression of T-cell immunoglobulin and mucin domain-3 (TIM-3) and programmed cell death protein (PD)-1) have been recorded [5,6,7,8]. Immune system deterioration is further exacerbated by the presence of increased percentages of myeloid-derived suppressor cells (MDSCs) and inflammatory monocytes (CD14+CD16+) [9,10,11]. The end result is that the immune system particularly of severe COVID-19 patients fails to generate a robust response to SARS-CoV-2 and accordingly eliminate infection.
To date, specific therapeutic interventions for COVID-19 are not available. The treatment of severely ill patients with anti-retrovirals (lopinavir, ritonavir, ribavirin, remdesivir), anti-inflammatory drugs (corticosteroids), monoclonal antibodies (mAbs) (tocilizumab, bevacizumab), immunomodulators (IFN-α, IFN-β, fingolimod), and combinations thereof has not been able to fully reverse fatal outcomes [12,13]. A proposed adjunctive therapy is the transfusion of convalescent plasma (CP), particularly in critically ill COVID-19 ICU patients [13,14]. CP therapy has been administered for years to treat patients with various infectious diseases including those caused by SARS, MERS, Ebola, and influenza, and clinical results supported its neutralizing properties. Moreover, apart from the direct antibody (Ab)-mediated antiviral effect, CP contains anti-inflammatory cytokines, natural antibodies, and antimicrobial proteins such as defensins and pentraxins, which can control over-activation of the immune system and act in an immunomodulatory mode [15]. In the case of SARS-CoV-2 and in support of the beneficial use of CP, a recent meta-analysis showed that CP administration was associated with a significant reduction in mortality [16], whereas the transfusion of CP in 20,000 COVID-19 patients proved that it is safe and carries a very low risk of complications [17]. Nevertheless, in a most recent clinical trial, CP infusion in 228 COVID-19 patients with severe pneumonia did not offer any significant benefit as for clinical status and overall mortality rate [18].
Although many reports have analyzed in detail immune responses in the course of COVID-19, there is limited knowledge regarding possible alterations in immune cells that may persist in recovered individuals after SARS-CoV-2 infection. CP is collected by apheresis from patients who have established a humoral immune response against SARS-CoV-2 following COVID-19 resolution [15]; therefore, CP donors are the ideal cohort for immune profiling after recovery. In the present study, we assessed peripheral blood (PB) immune cell signatures in CP donors in an effort to elucidate if the immune system is fully competent after recovery, both numerically and functionally. Our study may provide important information on phenotypic immune signatures persisting after SARS-CoV-2 infection, highlight differences between asymptomatic, mild, and severe COVID-19 cases and eventually facilitate the recognition of Ab-negative SARS-CoV-2-infected individuals, who may have developed a competent anti-viral cell-mediated immune response and thus could be protected from reinfection.

Donors included in the study (n = 95) were divided into 5 groups according to their clinical characteristics. Candidate donors underwent a blood donors’ history questionnaire and symptoms related to SARS-Co-V infection were also recorded (i.e., fever, fatigue, headache, cough, dyspnea, diarrhea, loss of smell, loss of taste, duration of symptoms). For the detection of anti-SARS-CoV-2 Abs, commercially available ELISAs (Euroimmun Medizinische Labordiagnostika AG, Lubeck, Germany), which detect plasma IgG and IgA antibodies against the recombinant spike protein (S1 domain) of SARS-CoV-2 were used according to the manufacturer’s instructions. Ratios < 0.8 were considered negative, ≥0.8 to <1.1 were considered borderline, and ≥1.1 were considered positive.

Samples were run on a three-laser (blue, red, violet) 12-fluorochrome 14-parameter BD FACSCelesta (BD Biosciences). The initial set-up of PMT voltages was performed with unstained control donor cells, while the appropriate compensation set-up was effectuated with multiple single-tube staining of all markers/fluorophores used, utilizing the BD™ CompBeads Set Anti-Mouse Igκ (BD Biosciences, #552843). A total number of 100,000 white blood cells (WBCs) were acquired per sample, with the threshold set at the CD45-APC-H7 channel to avoid measurement of cell debris events, due to the Lyse-no-Wash protocol followed for sample preparation.

Data analysis was performed with the BD FACSDivaTM software (BD Biosciences). The gating strategy followed, allowed for the initial selection of CD45+ cells (WBC region), which were further separated into three main gates on a CD45/side scatter (SSC) dot plot corresponding to lymphocytes, monocytes, and granulocytes (Figure S1A). Lymphocytes were further represented on a CD3 vs. SSC-A plot, which allowed the selection of CD3+ T cells. The CD4 vs. CD8 expression pattern of gated CD3+ T cells was represented on a dot plot, where subpopulations were selected from the CD4+ and CD8+ T cells. Each was further plotted vs. CD25, allowing gating of CD25highCD4+ regulatory T cells (Tregs) and CD25highCD8+ Tregs. To analyze polarized helper T cell (Th) subpopulations, CD3+CD4+ T cells were separately represented on plots vs. CD183, CD194, and CD196. Accordingly, on each plot, the Th1, Th2, and Th9 subpopulations were gated, respectively. The Th17 subpopulation was estimated on CD3+CD4+ T cells that coexpressed CD194 and CD196; the percentages of Th17 cells were obtained through the Boolean approach. The CD3-negative (-) cells were represented on a CD16 vs. CD56 plot, and NK cell subpopulations were gated; B cells were gated on the same plot and were estimated indirectly being mutually negative for T cell and NK cell markers (CD3−CD16−CD56−). To acquire the percentage of NKT cells, CD3+CD4+/CD8+ cells were represented on a CD16 vs. CD56 dot plot. Monocyte subpopulations were gated on a CD14 vs. CD16 dot plot, in which the monocyte region from the initial CD45 vs. SSC-A plot was represented. The population hierarchy tree (Figure S1B) allowed for the concomitant determination of the percentages of 24 phenotypically distinct (Figure S1C for Th1, Th2, Th9, and Th17) PB immune cell subpopulations.

In conclusion, the immune profile of SARS-CoV-2 recovered CP donors, at least within 2 months after either the onset of symptoms or a positive PCR result, shows characteristic alterations in innate (monocytes and granulocytes) but most importantly in adaptive (T, B, and NKT) immune cells. These persistent changes seem to be related to the degree of activation of the humoral arm of immunity against the virus as well as to the severity of the disease.

This research was partially funded by SYN-ENOSIS.

All study procedures were carried out in accordance with the declaration of Helsinki (18th World Medical Association Assembly), its subsequent amendments, the Greek regulations and guidelines, as well as the Good Clinical practice Guidelines (GCP) as defined by the International Conference of Harmonization.

All participants provided written informed consent. The study was approved by the ethics committee of “Alexandra” General Hospital, Athens, Greece (Ref No 245/16 April 2020). 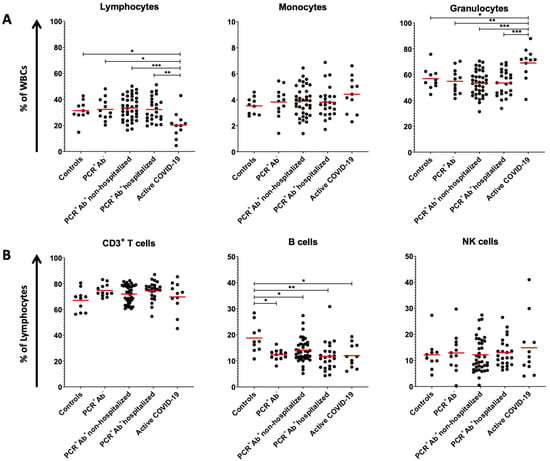