HIV-1 subtype CRF01_AE is the second most predominant strain in Bulgaria, yet little is known about the molecular epidemiology of its origin and transmissibility. We used a phylodynamics approach to better understand this sub-epidemic by analyzing 270 HIV-1 polymerase (pol) sequences collected from persons diagnosed with HIV/AIDS between 1995 and 2019. Using network analyses at a 1.5% genetic distance threshold (d), we found a large 154-member outbreak cluster composed mostly of persons who inject drugs (PWID) that were predominantly men. At d = 0.5%, which was used to identify more recent transmission, the large cluster dissociated into three clusters of 18, 12, and 7 members, respectively, five dyads, and 107 singletons. Phylogenetic analysis of the Bulgarian sequences with publicly available global sequences showed that CRF01_AE likely originated from multiple Asian countries, with Vietnam as the likely source of the outbreak cluster between 1988 and 1990. Our findings indicate that CRF01_AE was introduced into Bulgaria multiple times since 1988, and infections then rapidly spread among PWID locally with bridging to other risk groups and countries. CRF01_AE continues to spread in Bulgaria as evidenced by the more recent large clusters identified at d = 0.5%, highlighting the importance of public health prevention efforts in the PWID communities. View Full-Text
Keywords: HIV-1; molecular epidemiology; transmission clusters; transmission dynamics; circulating recombinant forms; drug resistance; prevention HIV-1; molecular epidemiology; transmission clusters; transmission dynamics; circulating recombinant forms; drug resistance; prevention
►▼ Show Figures 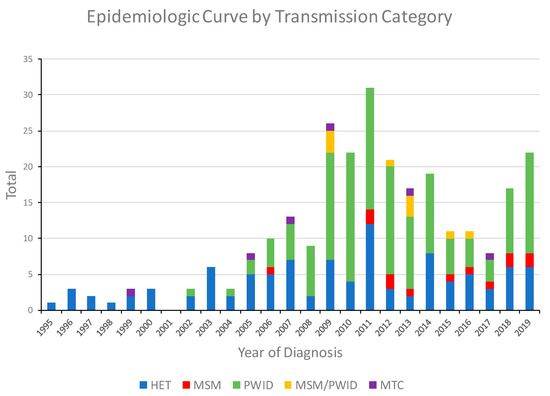