Infection by severe acute respiratory syndrome coronavirus 2 (SARS-CoV-2), the causative agent of coronavirus pneumonia disease (COVID-19), is spreading rapidly worldwide [1]. As yet, no drug has been shown to be sufficiently effective for treating COVID-19. Therefore, drug repurposing offers potentially the quickest path toward disease treatment.
The genomic RNA of coronaviruses is surrounded by an envelope [2]. Initiation of viral entry requires two steps. In the first step, the Spike (S) protein in the viral envelope, binds to its receptor present in the plasma membrane through its receptor-binding domain (RBD), after S protein is cleaved into S1 and S2 proteins by some cellular proteases. SARS-CoV and SARS-CoV-2 use angiotensin converting enzyme 2 (ACE2), while the Middle East respiratory syndrome coronavirus (MERS-CoV) uses CD26 as a receptor. Secondly, S2 protein is cleaved by either cell surface transmembrane serine protease 2 (TMPRSS2) or lysosomal protease cathepsins. This cleavage is called priming, and exposes the fusion peptide in S2 protein, allowing it to attach to the plasma or endosomal membrane, resulting in the fusion between the viral envelope and the cellular membrane (envelope fusion). This fusion allows the viral RNA to enter the cytoplasm, where it replicates. It has been recently demonstrated that a proprotein convertase (PPC) motif present at the S1/S2 boundary of SARS-CoV-2 S protein is cleaved by the protease furin, s step crucial for efficient viral entry that probably acts by enhancing the interaction of RBD with ACE2 [3]. Since the furin-catalyzed pre-activation of S protein was not observed in SARS-CoV, it could be involved in COVID-19-unique disease development [3]. While furin is ubiquitously expressed [4], recent analysis of single-cell RNA-seq datasets from human tissues revealed that TMPRSS2 is expressed in a cell type specific manner [5,6]. Therefore, SARS-CoV-2 likely enters cells lacking TMPRSS2 through the cathepsin-dependent endosome pathway. Nevertheless, TMPRSS2-knockout resulted in reduced spread of SARS-CoV and MERS-CoV in the airways accompanied by reduced severity of lung pathology in a mouse model [7]. Therefore, furin and TMPRSS2 are likely crucial for SARS-CoV-2 spread and disease development in vivo, and targeting them either by inhibiting their catalytic activity or suppressing their expression is likely to be an effective strategy to cure COVID-19.
We have previously reported that nafamostat mesylate, an existing Japanese drug used for acute pancreatitis and disseminated intravascular coagulation (DIC), effectively inhibits MERS-CoV S protein-mediated membrane fusion by targeting TMPRSS2 priming activity [8]. We did this using the cell fusion assay monitored by the dual split protein (DSP) reporter to screen the FDA-approved drug library. Nafamostat mesylate potently inhibited MERS-CoV infection of lung epithelium-derived Calu-3 cells.
In this study, we established an experimental assay system monitoring ACE2- and TMPRSS2-dependent SARS-CoV-2 S protein-mediated membrane fusion, in 293FT and Calu-3 cells and found that nafamostat mesylate potently blocked SARS-CoV-2 S protein-mediated fusion in a cell fusion assay system and viral infection in vitro in a cell-type-dependent manner.

VeroE6 (ATCC CRL-1586) cells were maintained in Eagle’s minimal essential media (MEM) containing 10% FBS. The cells were incubated at 37 °C with 5% CO2, and regularly tested for mycoplasma contamination by using PCR and were confirmed to be mycoplasma-free. Respiratory swabs were obtained from a patient with laboratory-confirmed COVID-19, who was hospitalized at the Center Hospital of the National Center for Global Health and Medicine, Tokyo, Japan. The swabs were submitted to the Division of Virology, Department of Microbiology and Immunology, Institute of Medical Science, the University of Tokyo for virus isolation by inoculating with VeroE6 cells. The research protocol was approved by the Research Ethics Review Committee of the Institute of Medical Science of the University of Tokyo. SARS-CoV-2 viruses were propagated in VeroE6 cells in Opti-MEM I (Invitrogen) containing 0.3% bovine serum albumin (BSA) and 1 µg of L-1-Tosylamide-2-phenylethyl chloromethyl ketone (TPCK)-trypsin/ml at 37 °C. All experiments with SARS-CoV-2 viruses were performed in enhanced biosafety level 3 (BSL3) containment laboratories at the University of Tokyo, which are approved for such use by the Ministry of Agriculture, Forestry and Fisheries, Japan.

Calu-3 (ATCC HTB-55) cells were maintained in MEM containing 10% FBS. VeroE6/TMPRSS2 [12] (JCRB 1819) cells were propagated in the presence of 1 mg/ml geneticin (G418; Invivogen) and 5 μg/mL plasmocin prophylactic (Invivogen) in DMEM containing 10% FBS. All cells were incubated at 37 °C with 5% CO2, and regularly tested for mycoplasma contamination by PCR and were confirmed to be mycoplasma-free. Using VeroE6/TMPRSS2 or Calu-3 cells as target cells, in vitro infection experiments were composed of two groups, “pretreatment” and “no-pretreatment”. In the “pretreatment” group, cells were pretreated with nafamostat mesylate (10-fold serial dilutions from 100 μM to 1 nM, 4 wells for each dose) for 1 h before infection. SARS-CoV-2 was then added at a multiplicity of infection (MOI) of 0.01 or 0.1 in the absence of TPCK-trypsin and cells were further incubated for 30 min for viral entry. The culture medium was then changed to fresh medium with the same concentrations of nafamostat mesylate as those before infection. In the “no-pretreatment” group, cells were incubated with fresh medium for 1 h in the absence of nafamostat mesylate before infection. SARS-CoV-2 was then added and further incubated for 30 min. The culture medium was then changed to fresh medium containing nafamostat mesylate as in the “pretreatment” group. Cells untreated with nafamostat mesylate before and after infection were also included as a control. Three (for VeroE6/TMPRSS2) or 5 (for Calu-3) days after infection, EC50 was determined using the Spearman–Karber formula [13] based on the appearance of visually detectable cytopathic effect (CPE) in quadruplicate experiments.

Our findings clearly indicate that nafamostat mesylate, the most effective TMPRSS2 inhibitor so far reported, potently inhibits SARS-CoV-2 S protein-mediated fusion in a cell fusion assay system and viral infection in vitro in a cell-type-dependent manner. Furthermore, EC50 values for Calu-3 cells with the pretreatment were around 10 nM, similar to our previous findings with MERS-CoV infection [8]. This extremely high sensitivity to nafamostat mesylate may be because the TMPRSS2-dependent entry pathway predominates in lung epithelium-derived Calu-3 cells [8,14,18]. Camostat mesylate-mediated inhibition of TMPRSS2 significantly reduced SARS-CoV-2 infection of primary human airway epithelial cells [14], suggesting that the TMPRSS2-dependent entry pathway is likely dominant in lung epithelial cells. This idea is also supported by the single-cell RNA-seq data analysis demonstrating high expression of TMPRSS2 in alveolar type 1 and 2 cells [5,6]. Given that blood concentrations of nafamostat mesylate were maintained at 30–240 nM when it was administered intravenously through continuous infusion according to the standard protocol for DIC patients [19], nafamostat mesylate could be used to treat COVID-19. In contrast, significantly higher doses of nafamostat mesylate are required to block SARS-CoV-2 infection of monkey kidney VeroE6/TMPRSS2 cells as reported previously [20], which is probably due to the significant contribution of the TMPRSS2-independent, cathepsin-dependent endosome pathway [17]. Since a pharmacokinetics study using rats revealed the maximum concentration of intact nafamostat mesylate in the lung after infusion to be about 60-fold higher in comparison with the maximum blood concentration [21], such an accumulation may partially suppress SARS-CoV-2 infection of VeroE6/TMPRSS2-like cells, in which the endosome entry pathway predominates [17]. Therefore, identification and characterization of cells that play a key role in virus spread and disease development are required.
Hoffmann et al. have recently reported that nafamostat mesylate blocks activation of SARS-CoV-2 [22]. However here we clearly demonstrated that nafamostat mesylate blocked the membrane fusion step of the virus entry and its activity to block SARS-CoV-2 infection was cell type dependent. These findings are crucial for developing therapeutic strategies. It has been reported recently that abnormal coagulation with elevated concentrations of D-dimer, characteristic of DIC with enhanced fibrinolysis, may influence the prognosis of COVID-19 [23,24]. Furthermore, in a murine asthma model, nafamostat mesylate attenuates respiratory inflammation by blocking activation of NF-κB, a critical transcription factor for inflammatory cytokine production [25]. Therefore, nafamostat mesylate is expected to have multiple therapeutic effects. Since nafamostat mesylate has been prescribed in Japan for many years and adequate clinical data regarding safety have accumulated, we suggest that it should be evaluated in COVID-19 patients by itself or in combination with other antiviral drugs that target separate processes needed for virus production.

This work was supported in part by grants-in-aid from the Japanese Society for the Promotion of Science (16H06575 to JI, 18K15235 to MY), a Program of Japan Initiative for Global Research Network on Infectious Diseases (JGRID) from AMED (JP18fm0108006 to YaK), NIAID-funded Center for Research on Influenza Pathogenesis (CRIP; HHSN272201400008C to YoK) and a Research Program on Emerging and Re-emerging Infectious Diseases from AMED (19fk0108113 to YoK). 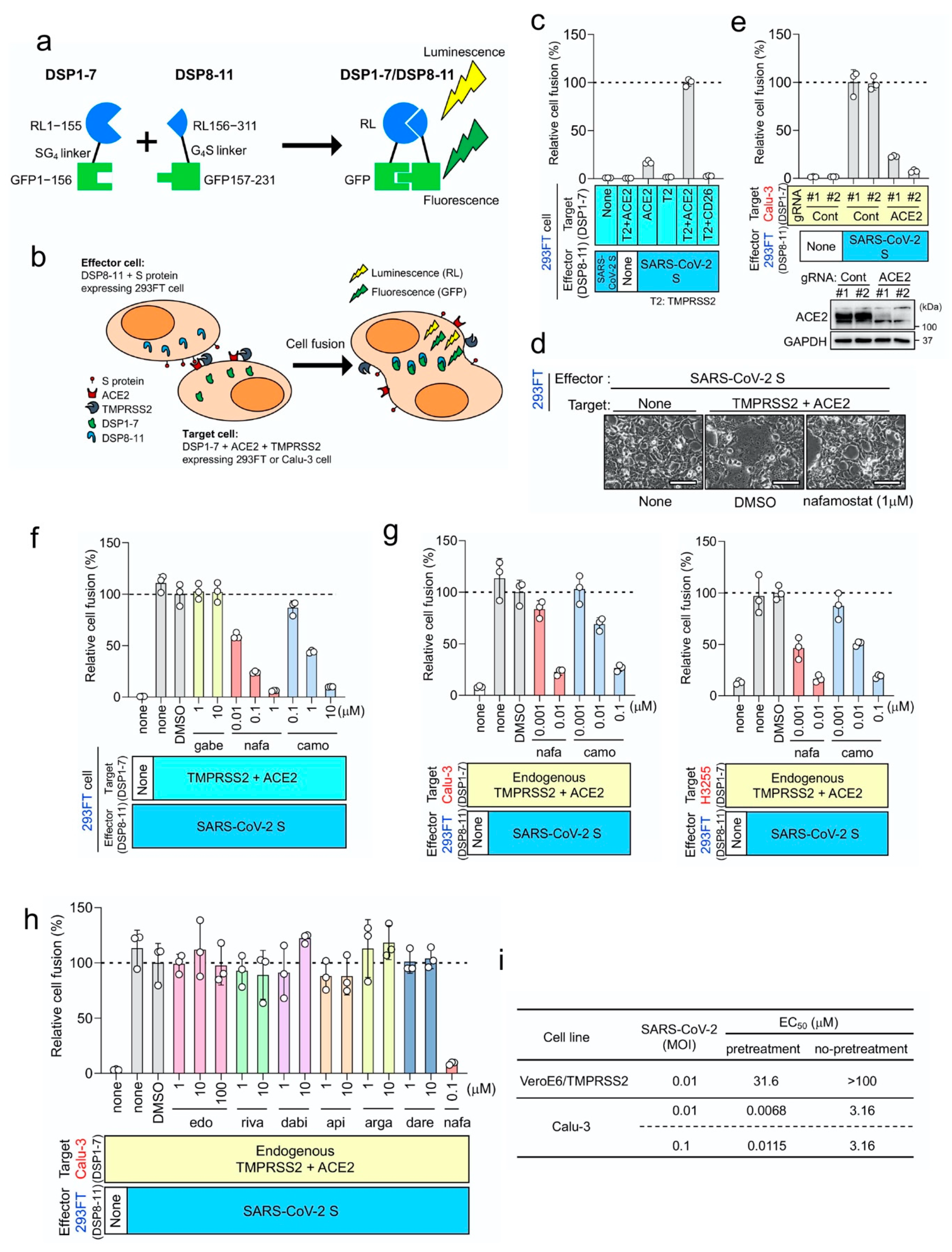