Rotaviruses (RVs) are the leading cause of the acute viral gastroenteritis in young children and livestock animals worldwide. Although live attenuated vaccines have been applied to control RV infection for many years, the underlying mechanisms of RV attenuation following cell culture adaption are unknown. To study these mechanisms at the genomic level, we have sequenced and conducted a comparative analysis of two virulent human (Wa, G1P[8] and M, G3P[8]) and two virulent porcine (Gottfried, G4P[6] and OSU, G5P[7]) RV strains maintained in gnotobiotic piglets for 22, 11, 12 and 9 serial passages, respectively, with their attenuated counterparts serially passaged in MA-104 cell cultures for 25, 43, 54 and 43 passages, respectively. We showed that most of the mutations were clustered in the VP4 gene, with a relatively high nonsynonymous substitution rate (81.2%). Moreover, two amino acid substitutions observed in the VP4 gene were conserved between two or more strain pairs. D385N substitution was found in M, Wa and Gottfried strains, and another one, S471H/L was present in Wa and Gottfried strains. Importantly, D385 was reported previously in another study and may be involved in regulation of virus entry. Of interest, although no 385 substitution was found in OSU strains, the attenuated OSU strain contained a unique D393H substitution within the same VP4 hydrophobic domain. Collectively, our data suggest that the VP4 hydrophobic region may play an important role in RV attenuation and aa385 and aa393 may represent potential targets for RV vaccine development using reverse genetics and site-specific mutagenesis. View Full-Text
Keywords: rotavirus; VP4; attenuation; vaccine; cell culture adaptation rotavirus; VP4; attenuation; vaccine; cell culture adaptation
►▼ Show Figures 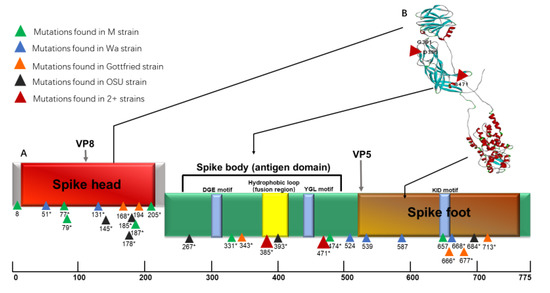