Combination antiretroviral therapy (cART) controls but does not eradicate HIV infection; HIV persistence is the principal obstacle to curing infections. The proportion of defective proviruses increases during cART, but the dynamics of this process are not well understood, and a quantitative analysis of how the proviral landscape is reshaped after cART is initiated is critical to understanding how HIV persists. Here, we studied longitudinal samples from HIV infected individuals undergoing long term cART using multiplexed Droplet Digital PCR (ddPCR) approaches to quantify the proportion of deleted proviruses in lymphocytes. In most individuals undergoing cART, HIV proviruses that contain gag are lost more quickly than those that lack gag. Increases in the fraction of gag-deleted proviruses occurred only after 1–2 years of therapy, suggesting that the immune system, and/or toxicity of viral re-activation helps to gradually shape the proviral landscape. After 10–15 years on therapy, there were as many as 3.5–5 times more proviruses in which gag was deleted or highly defective than those containing intact gag. We developed a provirus-specific ddPCR approach to quantify individual clones. Investigation of a clone of cells containing a deleted HIV provirus integrated in the HORMAD2 gene revealed that the cells underwent a massive expansion shortly after cART was initiated until the clone, which was primarily in effector memory cells, dominated the population of proviruses for over 6 years. The expansion of this HIV-infected clone had substantial effects on the overall proviral population. View Full-Text
Keywords: HIV clonal expansion; proviruses; ddPCR; HIV persistence HIV clonal expansion; proviruses; ddPCR; HIV persistence
►▼ Show Figures 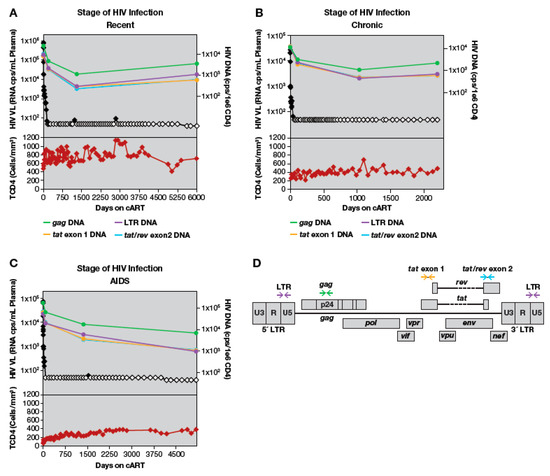