The Zika virus (ZIKV) is a newly emerged pathogen in the Western hemisphere. It was declared a global health emergency by the World Health Organization in 2016. There have been 223,477 confirmed cases, including 3720 congenital syndrome cases since 2015. ZIKV infection symptoms range from asymptomatic to Gullain–Barré syndrome and extensive neuropathology in infected fetuses. Passive and active vaccines have been unsuccessful in the protection from or the treatment of flaviviral infections due to antibody-dependent enhancement (ADE). ADE causes an increased viral load due to an increased monocyte opsonization by non-neutralizing, low-avidity antibodies from a previous dengue virus (DENV) infection or from a previous exposure to ZIKV. We have previously demonstrated that polyclonal avian IgY generated against whole-killed DENV-2 ameliorates DENV infection in mice while not inducing ADE. This is likely due to the inability of the Fc portion of IgY to bind to mammalian Fc receptors. We have shown here that ZIKV oligoclonal IgY is able to neutralize the virus in vitro and in IFNAR−/− mice. The concentration of ZIKV-specific IgY yielding 50% neutralization (NT50) was 25 µg/mL. The exposure of the ZIKV, prior to culture with ZIKV-specific IgY or 4G2 flavivirus-enveloped IgG, demonstrated that the ZIKV-specific IgY does not induce ADE. ZIKV IgY was protective in vivo when administered following a lethal ZIKV challenge in 3-week-old IFNAR−/− mice. We propose polyclonal ZIKV-specific IgY may provide a viable passive immunotherapy for a ZIKV infection without inducing ADE. View Full-Text
Keywords: Zika virus; IgY; Immunotherapy Zika virus; IgY; Immunotherapy
►▼ Show Figures 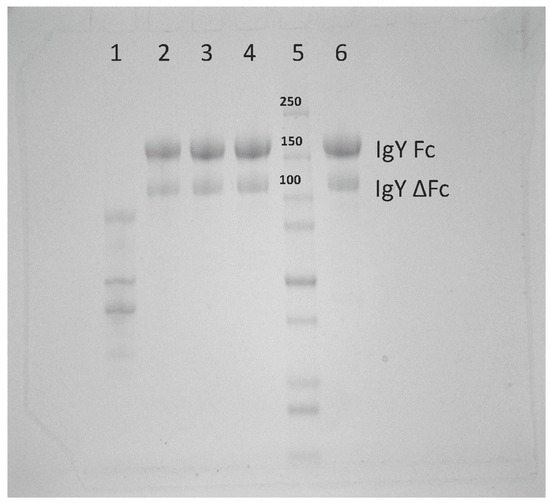