Campylobacter jejuni is a frequent foodborne pathogen of humans. As C. jejuni infections commonly arise from contaminated poultry, phage treatments have been proposed to reduce the C. jejuni load on farms to prevent human infections. While a prior report documented the transcriptome of C. jejuni phages during the carrier state life cycle, transcriptomic analysis of a lytic C. jejuni phage infection has not been reported. We used RNA-sequencing to profile the infection of C. jejuni NCTC 11168 by the lytic T4-like myovirus NCTC 12673. Interestingly, we found that the most highly upregulated host genes upon infection make up an uncharacterized operon (cj0423–cj0425), which includes genes with similarity to T4 superinfection exclusion and antitoxin genes. Other significantly upregulated genes include those involved in oxidative stress defense and the Campylobactermultidrug efflux pump (CmeABC). We found that phage infectivity is altered by mutagenesis of the oxidative stress defense genes catalase (katA), alkyl-hydroxyperoxidase (ahpC), and superoxide dismutase (sodB), and by mutagenesis of the efflux pump genes cmeA and cmeB. This suggests a role for these gene products in phage infection. Together, our results shed light on the phage-host dynamics of an important foodborne pathogen during lytic infection by a T4-like phage. View Full-Text
Keywords: Campylobacter jejuni; bacteriophage; NCTC 12673; transcriptome; phage defense Campylobacter jejuni; bacteriophage; NCTC 12673; transcriptome; phage defense
►▼ Show Figures 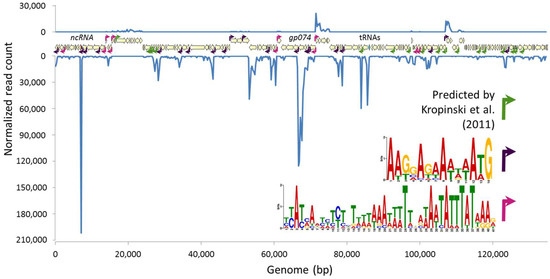