Bufavirus strain 1 (BuV1), a member of the Protoparvovirus genus of the Parvoviridae, was first isolated from fecal samples of children with acute diarrhea in Burkina Faso. Since this initial discovery, BuVs have been isolated in several countries, including Finland, the Netherlands, and Bhutan, in pediatric patients exhibiting similar symptoms. Towards their characterization, the structures of virus-like particles of BuV1, BuV2, and BuV3, the current known genotypes, have been determined by cryo-electron microscopy and image reconstruction to 2.84, 3.79, and 3.25 Å, respectively. The BuVs, 65–73% identical in amino acid sequence, conserve the major viral protein, VP2, structure and general capsid surface features of parvoviruses. These include a core β-barrel (βB-βI), α-helix A, and large surface loops inserted between these elements in VP2. The capsid contains depressions at the icosahedral 2-fold and around the 5-fold axes, and has three separated protrusions surrounding the 3-fold axes. Structure comparison among the BuVs and to available parvovirus structures revealed capsid surface variations and capsid 3-fold protrusions that depart from the single pinwheel arrangement of the animal protoparvoviruses. These structures provide a platform to begin the molecular characterization of these potentially pathogenic viruses. View Full-Text
Keywords: parvoviruses; bufavirus; single-stranded DNA virus; cryo-EM and image reconstruction parvoviruses; bufavirus; single-stranded DNA virus; cryo-EM and image reconstruction
►▼ Show Figures 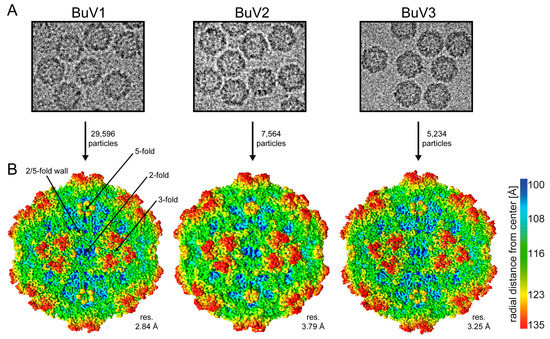