Mutual Influences of Urban Microclimate and Urban Trees: An Investigation of Phenology and Cooling Capacity
Previous Article in Journal

Structure, Diversity, and Carbon Stocks of the Tree Community of Kumasi, Ghana

Urban forestry has the potential to address many urban environmental and sustainability challenges. Yet in Africa, urban forest characterization and its potential to contribute to human wellbeing are often neglected or restrained. This paper describes the structure, diversity, and composition of an urban forest and its potential to store carbon as a means of climate change mitigation and adaptation in Kumasi. The vegetation inventory included a survey of 470,100-m2 plots based on a stratified random sampling technique and six streets ranging from 50 m to 1 km. A total of 3757 trees, comprising 176 species and 46 families, were enumerated. Tree abundance and species richness were left skewed and unimodally distributed based on diameter at breast height (DBH). Trees in the diameter classes >60 cm together had the lowest species richness (17%) and abundance (9%), yet contributed more than 50% of the total carbon stored in trees within the city. Overall, about 1.2 million tonnes of carbon is captured in aboveground components of trees in Kumasi, with a mean of 228 t C ha−1. Tree density, DBH, height, basal area, aboveground carbon storage, and species richness were significantly different among green spaces (p < 0.05). The diversity was also significantly different among urban zones (p < 0.0005). The DBH distribution of trees followed a modified reverse J-shaped model. The urban forest structure and composition is quite unique. The practice of urban forestry has the potential to conserve biological diversity and combat climate change. The introduction of policies and actions to support the expansion of urban forest cover and diversity is widely encouraged. View Full-Text
Keywords: species richness; abundance; urban forest; green spaces; sustainability species richness; abundance; urban forest; green spaces; sustainability
►▼ Show Figures 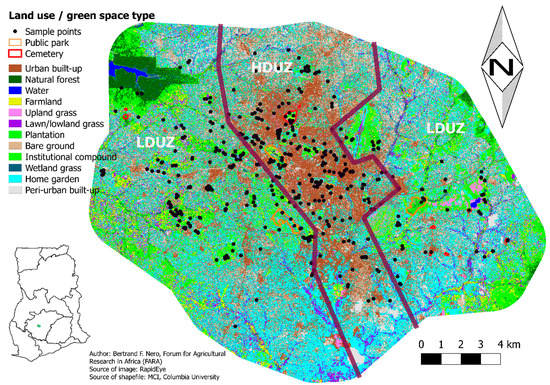