Do Silviculture and Forest Management Affect the Genetic Diversity and Structure of Long-Impacted Forest Tree Populations?
Next Article in Special Issue

Carpinus betulus L. is a deciduous tree widely distributed in Europe with strong adaptation, and it plays a key role in landscaping and timbering because of its variety of colors and shapes. Recently introduced to China for similar purposes, this species needs further study as to its physiological adaptability under various soil salinity conditions. In this study, the growth and physicochemical changes of C. betulus seedlings cultivated in soil under six different levels of salinity stress (NaCl: 0, 17, 34, 51, 68, and 85 mM) were studied for 14, 28 and 42 days. The plant growth and gas exchange parameters were not changed much by 17 and 34 mM NaCl, but they were significantly affected after treatments with 51 ~ 85 mM NaCl. The chlorophyll content was not significantly affected at 17 and 34 mM salinity, and the relative water content, malondialdehyde content and cell membrane stability of C. betulus did not change obviously under the 17 and 34 mM treatments, indicating that C. betulus is able to adapt to low-salinity conditions. The amount of osmotic adjustment substances and the antioxidant enzyme activity of C. betulus increased after 14 and 28 days and then decreased with increasing salinity gradients, but the proline content was increased during the entire time for different salinities. The Na content of different organs increased in response to salinity, and the K/Na, Ca/Na, and Mg/Na ratios were significantly affected by salinity. These results suggest that the ability of C. betulus to synthesize osmotic substances and enzymatic antioxidants may be impaired under severe saline conditions (68 ~ 85 mM NaCl) but that it can tolerate and accumulate salt at low salinity concentrations (17 ~ 34 mM NaCl). Such information is useful for land managers considering introducing this species to sites with various soil salinity conditions. View Full-Text
Keywords: salinity; Carpinus betulus; morphological indices; gas exchange; osmotic adjustment substances; antioxidant enzyme activity; ion relationships salinity; Carpinus betulus; morphological indices; gas exchange; osmotic adjustment substances; antioxidant enzyme activity; ion relationships
►▼ Show Figures 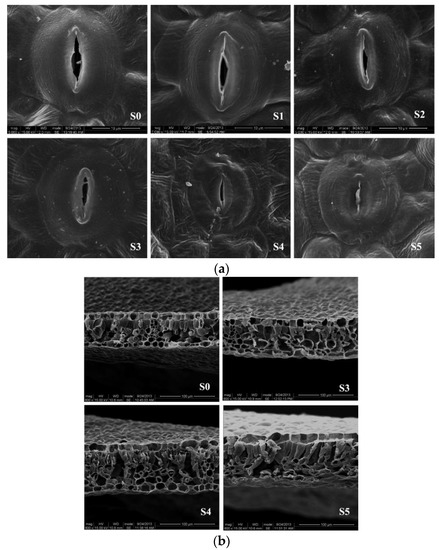