It is strongly debated whether bamboo forest ecosystems are a carbon sink or a carbon source because of insufficient knowledge regarding carbon loss via CO2 emissions from these forests. The surface area (S) of bamboo culms (stems) is important for estimating culm respiration, a major component of carbon cycling in bamboo forests. However, few studies have attempted to formulate predictive equations for S. In this study, we developed allometric equations for predicting S in three bamboo species grown in Kyushu Island, western Japan: Phyllostachys pubescens Mazel ex Houz., P. bambusoides Sieb. et Zucc. and P. nigra var. henonis. We used a power equation between S and diameter at breast height (D) and a linear equation between S and D × total culm length (H). The results indicated that P. bambusoides and P. nigra shared common site-independent equations. In contrast, P. pubescens required species-specific equations due to interspecific variation in culm slenderness and tapering. We also found that D was a better predictive variable than DH when quantifying S because of its satisfactory predictive performance and simplicity. These findings will be beneficial for evaluating the contribution of bamboo forest ecosystems to carbon cycling. View Full-Text
Keywords: allometric equation; carbon cycling; culm respiration; culm surface area; Phyllostachys allometric equation; carbon cycling; culm respiration; culm surface area; Phyllostachys
►▼ Show Figures 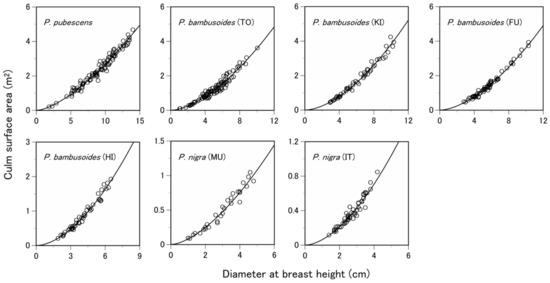