Widespread Distribution of Trypodendron laeve in the Carpathian Mountains (Romania)

Trypodendron laeve Eggers, 1939 is a species of ambrosia beetle much less known than the other three Trypodendron species occurring in Europe. Its status (native or alien) in Central Europe has been a subject of debate over the past two decades. In Romania, the species was discovered in 2008 and the aim of the research presented in this paper was to investigate its distribution in the Carpathians, mainly at high altitudes (>800 m), in tree stands with Norway spruce (Picea abies [L.] H. Karst). Panel intercept traps baited with synthetic pheromone for Trypodendron lineatum (Olivier, 1795) were used in the spring of 2015, at 31 locations. Adults of T. laeve were caught in 20 of them. Additional observations were made within some studies using similar baits and T. laeve specimens were caught in eight locations. T. laeve was always trapped together with T. lineatum, and at some locations also together with T. domesticum (Linnaeus, 1758) and T. signatum (Fabricius, 1787). In all traps, fewer specimens of T. laeve were caught compared to T. lineatum. The species has a widespread distribution in the mountain regions, within forests composed of native tree species and generally located far away from commercial routes. There, it occurs together with other native species of the same taxonomic genus. It seems to be more abundant at high altitudes, but overall its populations are less abundant than those of T. lineatum. View Full-Text
Keywords: Trypodendron laeve; Carpathian Mountains; Romania; distribution Trypodendron laeve; Carpathian Mountains; Romania; distribution
►▼ Show Figures 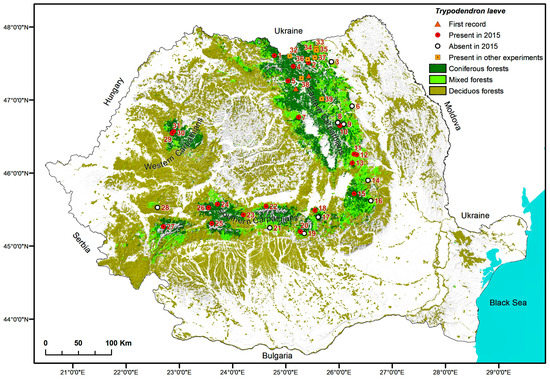