Since the confirmation of emerald ash borer ((EAB) Agrilus planipennis Fairmaire (Coleoptera: Buprestidae)) in 2002 [1,2], quarantine zones and other management recommendations have not slowed the pace of EAB infestation and it has spread across 31 American states and two Canadian provinces (Emerald Ash Borer Information Network 2017). It is projected that the invasive exotic insect will continue to move across North America, continuing to alter forest landscapes by killing host ash (Fraxinus spp.) trees [3]. While some studies indicate that there are certain ash trees that may be resistant despite the infested condition of the surrounding forest [4], EAB-induced mortality in ash species in infested forests is approximately 99% [5]. The outlook for North American ash trees is bleak as the confirmed range of EAB continues to expand. One forested ecosystem that is severely impacted by EAB’s continued expansion is black ash (Fraxinus nigra Marsh) wetlands.
Black ash grows in three ecotypes of the Upper Great Lakes region: depressional headwater catchments, wetland complexes, and riparian corridors [6,7]. All three of these ecotypes have prolonged periods of inundation or saturation throughout the growing season, the time of year when precipitation and temperature are conducive to plant growth. These wetland forest systems provide many ecosystem services. For example, black ash forested wetlands provide habitat and food sources for game birds, small animals, and deer [7], the canopy reduces heat input into streams [8,9], and the root structure maintains soil integrity during rain events, reducing erosion and sediment deposition downstream [10,11]. Current theories predict that cover type changes after EAB infestation will lead to loss of the tree canopy on the landscape and forested wetlands in the short-term will become dominated by a robust herbaceous community [12] and in the long-term possibly a shrub layer consisting of alder (Alnus spp.) [13,14].
Planting alternative species within black ash wetlands may be an approach to shift forest composition towards one that will be more resilient to EAB, thereby maintaining ecosystem services provided by forested wetlands. However, artificial regeneration within northern wetlands is a difficult task because of the unique conditions and climate stresses on seedlings [15,16]. For instance, a seedling planted within the region will endure a dramatic annual temperature swing and periods of time when standing water is prevalent. A recent study in northern Minnesota investigated planting in black ash wetland complexes in tandem with forest management practices [17], and their results highlighted a low survivorship among seedlings.
In this study, we used simulated EAB infestations to determine the impacts of EAB on tree seedling survival and used the initial results to subsequently test alternative planting techniques in uninfested ash forests. Our objectives were to (i) compare survival rates among deciduous and coniferous tree seedlings in black ash wetlands where manipulated overstory treatments reflected the timing of EAB infestation, and (ii) compare microsite and herbivory treatments to inform best practices for future plantings to mitigate EAB impact on forest canopy and structure.

This study consisted of three black ash wetlands that were part of an overstory manipulation study located on the Ottawa National Forest (ONF) and one uninfested black ash riparian corridor located on the Superior Municipal Forest (SMF) (Figure 1). There was some overlap in alternative species planted and details for each forest are presented below.

Treatments in the three wetlands were an untreated control (“Control”), girdling (“Girdle”), and felling of black ash (“Ash-Cut”). All black ash greater than 2.5 cm in diameter were treated in the Girdle and Ash-Cut wetlands. This is a similar design to a sister-study [12] and our intention for the Girdle treatment was to simulate the short-term impacts of an EAB infestation, while the Ash-Cut treatment simulated the long-term impacts of EAB infestation [1].
Ottawa National Forest study wetlands were planted with ten tree species suitable for saturated soils in summer 2013 (Table 2). Seedling ages ranged from two to four years and were purchased from the USDA (United States Department of Agriculture) Forest Service J.W. Toumey Nursery in Watersmeet, MI, USA. A series of ten transects were established across each wetland and seedlings were planted in pairs in high (hummock) and low (hollow) planting microsites within 1 m every 2 m along each transect, totaling 60 trees of each species in each wetland. Seedings were measured each year of the study during the last week of July.

The study area was along the riparian corridor of the Pokegama River that meanders through the Superior Municipal Forest in northwestern Wisconsin, USA (Figure 1, ▲). Soils were one of two distinct types: a sandy berm adjacent to the river that was created by deposits of coarse sediment, and clay-loams in adjacent lowland “back bays” (Table 1). The riparian corridor overstory was comprised of black ash and green ash (Fraxinus pennsylvanica Marsh) with lesser amounts of northern white cedar, balsam fir, and trembling aspen (Populus tremuloides Michx.).

Tree species were chosen for their suitability in saturated or inundated soils as well as their projected range within forecasted climate models [19]. Seedling species were red maple, hackberry (Celtis occidentalis L.), and northern white cedar (Table 3) obtained from the Wisconsin Department of Natural Resources nursery in Hayward, WI, USA. Planting groups were established in different microsite, herbivory deterrence, and elevational conditions. The three microsite conditions were natural flat areas (“Natural”), constructed hummocks (“Con. Hummock”), and cleared soil (“Scarification”). The constructed hummocks were created by placing a shovel-blade full of local soil on top of the forest floor and then fortifying it by covering it with burlap matting. The cleared planting locations were created by removing existing vegetation with a spade.
The three herbivore exclusion treatments were no treatment (“Control”), herbivore repellant (“Repellant”) (Plantskydd®, Tree World Plant Care Products Inc., St. Joseph, MO, USA) and fencing (“Fence”). The herbivore repellant was applied in the spring and fall each year following manufacturer instructions and fenced planting locations were 1.3 m tall. Each combination of microsite (3) and tree species (3) was replicated 36 times in a low elevation and 36 times in a high elevation planting zone, each approximately parallel to the river channel. One-third, or 12 planting groups per elevation zone, were assigned an herbivore treatment. Each of the 72 planting groups had three seedlings of each of the three species, for a total of nine seedlings per group or 648 seedlings. Seedlings were planted in fall 2015. Seedlings were measured each spring and fall for each year of the study period.

The planting year experienced elevated water tables throughout the growing season because of an unusually high snow pack and delayed snowmelt [22]. Additionally, standing water was present during the initial growing season at intermittent times due to high intensity rain storms [22].
Overall seedling survival across all treatments and microsites (n = 1800) after the first winter for the ONF planting study was 36% and after three years 22% of the planted seedlings survived. The second- and third-year survivorship was significantly higher than seedling establishment. Overall seedling survivorship from years 1–2 and years 2–3 was 75% and 87%, respectively. The hardwood species with the highest survivorship across the study period were silver maple, American elm, and basswood with 74%, 53%, and 40%, respectively (Table 4). The softwood species with the highest survivorship across the study period was northern white cedar at 23% (Table 4). None of the tamarack survived the 3-year study period. We found no statistical difference in seedling survival or growth from bare root stock or plug seedlings.
Initial survival rates for seedlings planted on hummocks and hollows were 44% and 29%, respectively. Over the course of the study, seedlings planted on hummocks survived better than those planted in hollows (Table 4). On average, there was a 19% (range: 4–47%) greater rate of survival than the corresponding paired seedling in the hollow over the 3-year span. However, of the top performing species, only silver maple did not display a preference between hummock or hollow and survived well on both microsites after three years with 76% and 72% survival, respectively. The ONF results indicate that survivorship and growth were not statistically different when canopy treatment was compared.
Average 3-year relative height growth for all the species except tamarack was 1.3 cm. Three-year relative height growth for six of these species was significantly higher for seedlings planted on hummocks compared to seedlings planted in hollows. In contrast, silver maple and burr oak relative growth rates were greater for hollow microsites than hummocks (Figure 2a). Average relative diameter growth across the study period was 0.3 cm, and northern white cedar planted on hummocks had the greatest increase in diameter, but the growth was highly variable (Table 3, Figure 2b).

The growing season monthly temperature (mean 14.8 °C, range 9.4–19.4 °C) and precipitation (mean 7.3 cm, range 4.0–11.5 cm) were within the 30-year average for the Superior, Wisconsin region National Oceanic Atmospheric Administration. In contrast to the relatively low first-year survival rates on the ONF, the overall mean seedling survival across all treatments and microsites at SMF was 82% one year after planting and 54% two years after planting. Red maple had a two-year survival rate of 63%, hackberry’s survival rate was 62%, and northern white cedar’s survival rate was 38% (Table 5).
For the SMF study, there were no statistical differences in survivorship or growth among any of our study factors: species, microsite, herbivore exclusion, and zones; therefore, we pooled the planting data and report the results here. There were no statistical differences in survivorship among browse treatments when species were pooled (mean 54%, range 39–65%). Similarly, there were no statistical differences in survivorship between the elevation zones (both 54%) despite the presence of standing water for most lower elevation (Zone 2) seedlings at the time of the 2017 measuring campaign. There were no differences among the microsite treatments when species were pooled (mean 54%, range 51–58%). Height growth for red maple was positive while hackberry showed no growth and northern white cedar decreased in height over the study period (Table 5). Average height growth for red maple was 9 cm, hackberry 0 cm, and northern white cedar −2 cm.

This research includes two studies that compared plantings of wetland-adapted tree species survival and growth within black ash-dominated wetlands. In one study, seedlings were planted within black ash wetlands that underwent overstory treatments that simulated our estimated short- and long-term EAB-induced conditions. In the second study, seedlings were planted in an uninfested black and green ash-dominated riparian corridor with manipulated microsite conditions and herbivore browse exclusion treatments.
Our results indicate higher survivorship of planted seedlings when planted on hummocks in ash-dominated wetland sites in the Great Lakes region of the US. These results suggest that perching seedlings on elevated beds enhances their survivorship by providing a more stable environment. The highest surviving species we planted were silver maple, American elm, basswood, hackberry, red maple, and northern white cedar and were determined to be species well suited for alternative species plantings in ash-dominated wetlands when compared to natural regeneration within similar systems.

Funding for this work primarily came from the Great Lakes Restoration Initiative through the USDA Forest Service Northern Research Station (EPA Great Lakes Initiative Template #664: Future of Black Ash Wetlands in the Great Lakes Region) and the Wisconsin Department of Natural Resources through the Lake Superior National Estuarine Research Reserve. Additional funding came from the School of Forest Resources and Environmental Science, Ecosystem Science Center and the Center for Water and Society at Michigan Technological University. We would like to thank the Ottawa National Forest, particularly Mark Fedora, as well as the City of Superior, Wisconsin and the Superior Municipal Forest for letting us conduct this research on their lands. We would like to thank Sarah Harttung, Ashlee Lehner, and Alex Perram for assisting in data collection from the Ottawa National Forest planting sites and we would like to thank the volunteer planting crew as well as the student interns from the Lake Superior National Estuarine Research Reserve for their help at the Superior Municipal Forest planting site. 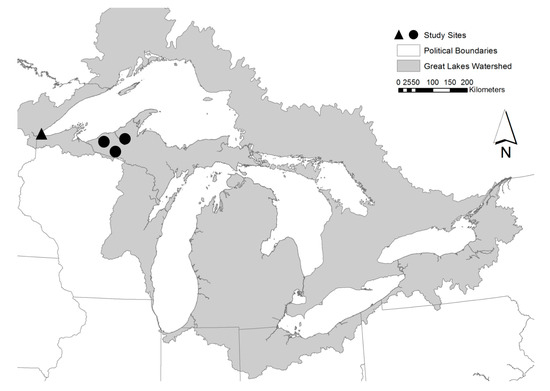 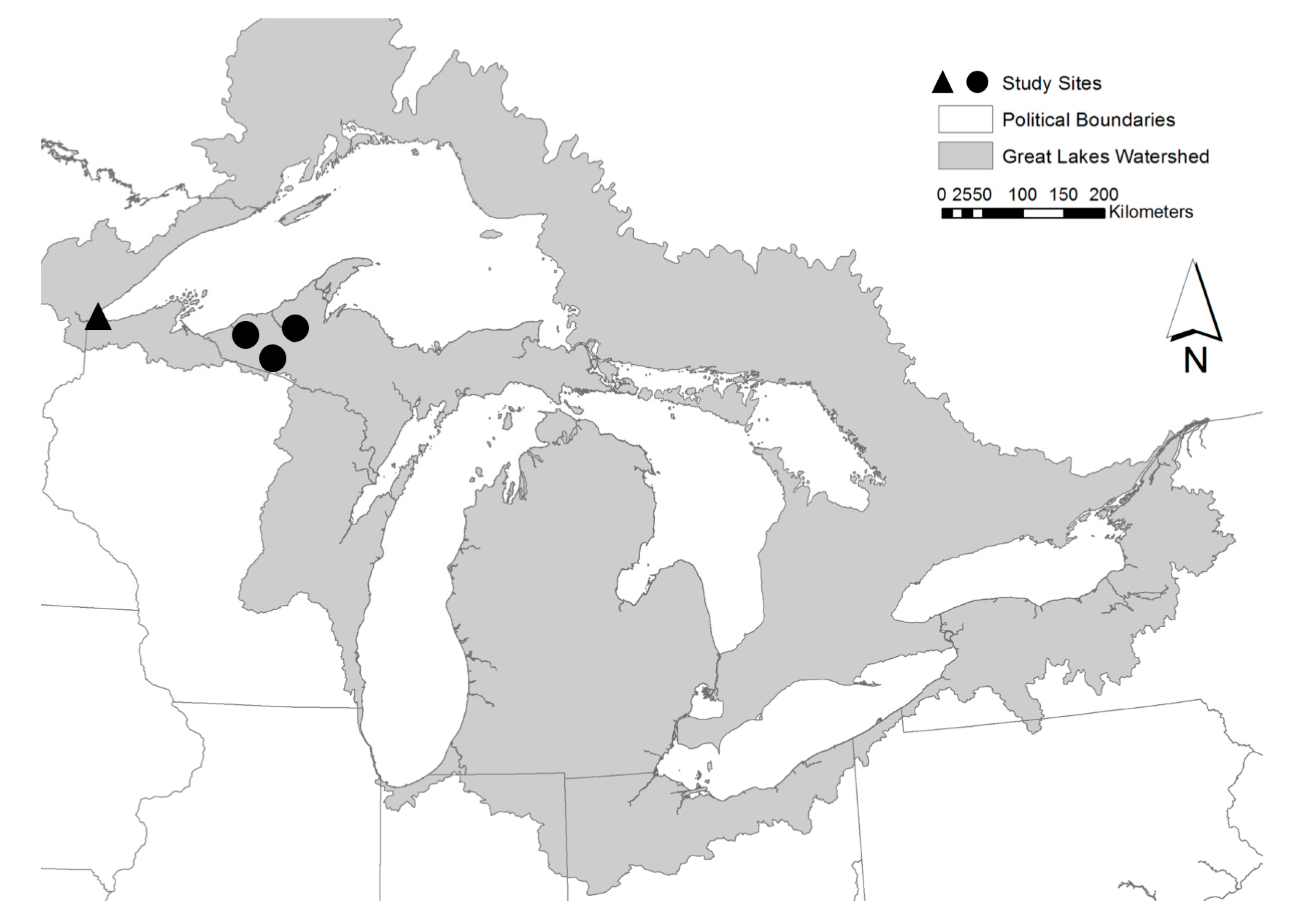