Reducing Firewood Movement by the Public: Use of Survey Data to Assess and Improve Efficacy of a Regulatory and Educational Program, 2006–2015
Previous Article in Special Issue

Use of Nuclear Microsatellite Loci for Evaluating Genetic Diversity of Selected Populations of Picea abies (L.) Karsten in the Czech Republic

Eight Czech Norway spruce populations and nine subpopulations from the Orlické hory population (a total of 17 units) were genetically screened by nuclear microsatellites. Sampling of young needles was carried out during 2012–2016 from individual trees growing in gene conservation units, national parks, a protected landscape area, and national nature reserves. A more detailed investigation was carried out in the Orlické hory locality, where genetic parameters were studied within nine subpopulations of one gene conservation unit (GZ 102 Trčkov–Šerlišský kotel–Vrchmezí) and compared to the other populations. The locality designations, geographic coordinates, altitudes, and natural origins are presented in Table 1, sampling locations in Figure 1, and mean sample size of studied units was 34.7. The distance between randomly-sampled adult trees was approximately 80–100 m within gene conservation units in different parts of the Czech Republic, and 25–30 m within nine subpopulations of one gene conservation unit (GZ 102 Trčkov–Šerlišský kotel–Vrchmezí). Investigated Norway spruce populations or subpopulations represent three main different ecotypes (Table 1).
Total genomic DNA was extracted from 20 mg of dry or 100 mg of frozen young needles collected from 591 Picea abies individuals of the investigated localities using a DNeasy Plant Mini Kit (Qiagen, Hilden, Germany) while following the manufacturer’s instructions. Liquid nitrogen was used for disrupting the plant material. DNA concentrations and purity were measured spectrophotometrically using a NanoPhotometer (Implen, Munich, Germany). SSR markers were used as molecular genetic markers for detecting genetic variation in the selected Norway spruce units. The following markers with dinucleotide motifs, whose PCR products provided single, clear, reproducible patterns were used: PAAC23, PAAC19 [22], WS00716.F13, WS0092.A19, WS0022.B15, WS0073.H08, WS00111.K13, WS0023.B03 [24] derived from expressed sequence tags (EST-SSRs), and SpAGD1 [23] developed from genomic libraries of Norway spruce [21]. The nine nuclear microsatellite markers were assembled into three multiplexes from the viewpoint of the targeted allele sizes and amplification conditions. Specific primers were labelled fluorescently using FAM, VIC, and NED dyes. The amplification reaction conditions of the first multiplex with loci PAAC23, PAAC19, and SpAGD1 were for each sample in a final volume of 15 µL and contained 1 µL of template DNA (≈10–50 ng/µL), 1.5 µL of 10× PCR buffer (Mg-free), 0.2 mM of dNTP mixture (Takara Bio Inc., Otsu, Shiga, Japan), 2 mM MgCl2, 0.37 U of Platinum® Taq DNA polymerase (Invitrogen, Carlsbad, CA, USA), and primer combinations of the forward and reverse primers. The primer concentrations of loci PAAC19 and SpAGD1 were 0.1 µM and for locus PAAC23 0.2 µM. The reaction mixtures were supplemented with sterile water for molecular biology (Sigma-Aldrich, St. Louis, MO, USA). The PCR profile was as follows: initial denaturation at 94 °C for 3 min followed by 37 cycles of denaturation at 94 °C for 45 s, an annealing temperature of 57 °C for 45 s, and extension at 72 °C for 45 s, with a final extension step at 72 °C for 20 min. PCR for the second multiplex with loci WS00716.F13, WS0092.A19, and WS0022.B15 was performed using the Type-it® Microsatellite PCR Kit (Qiagen, Hilden, Germany). The concentration of each primer was 0.1 µM. PCR cycling conditions consisted of an initial denaturation at 95 °C for 15 min followed by 26 cycles of denaturation at 94 °C for 30 s, an annealing temperature at 53 °C for 90 s and extension at 72 °C for 30 s, with a final extension step at 60 °C for 30 min. PCR conditions for the third multiplex with loci WS0073.H08, WS00111.K13, and WS0023.B03 were the same as for the second multiplex, again with concentrations of each primer at 0.1 µM, except that the annealing temperature was 55 °C. Amplifications were carried out in a Veriti thermal cycler (Applied Biosystems, Foster City, CA, USA).
PCR products were separated by capillary electrophoresis using the Applied Biosystems 3500 genetic analyzer (Applied Biosystems, Foster City, CA, USA). As size standard, we used GeneScanTM 600LIZ® (Applied Biosystems, Foster City, CA, USA). Alleles were sized using GeneMapper® 4.1 software (Applied Biosystems, Foster City, CA, USA). Micro-Checker software was used for identifying and correcting genotyping errors in microsatellite data and for estimation of null allele frequencies [30]. The majority of genetic diversity parameters—number of alleles, Shannon’s information index, observed heterozygosity, expected heterozygosity, fixation index (F), pairwise population FST values of the genetic divergence, Nei’s genetic distance, and a principal coordinate analysis (PCoA) were calculated using the statistical program GenAlEx 6.501 [31,32]. The fixation index was calculated as F = 1 − (Ho/He) according to Wright [33]. Deviations from Hardy-Weinberg equilibrium (HWE) for studied loci were assessed using CERVUS 3.0.7 with Bonferroni correction for evaluating the deviation significance [34]. Global Hardy-Weinberg tests across the studied populations were performed by GENEPOP 4.2 [35,36] using Markov chain Monte Carlo simulations with 10,000 dememorizations, 100 batches, and 10,000 iterations to detect significant heterozygote excess or deficiency. The genetic divergence FST and Nei’s genetic distance [37] between populations were estimated by computing a pairwise population matrix. Total FST was calculated as the analysis of molecular variance (AMOVA) based on 999 permutations with the software GenAlEx 6.501 [31,32]. A chi-squared test was used for evaluating the Hardy–Weinberg equilibrium (HWE) for co-dominant genotypes at a single locus and for a single population. The number of private alleles is the number of alleles unique to a single population. It was calculated as the mean value from all studied loci. The Bayesian clustering method implemented in STRUCTURE 2.3.4 software [38,39,40,41] was used to infer the population structure. The admixture model and correlated allele frequencies were used. We used a Length of Burn-in Period of 10,000 and 100,000 Markov chain Monte Carlo (MCMC) Repeats after Burn-in. Multiple runs were performed by setting the number of populations (K) from K = 1 to K = 15. Each run was repeated ten times. The best estimate of K values was calculated using the web-based STRUCTURE HARVESTER program [42].

The use of nuclear microsatellites has proven to be successful in detecting genetic variation in the studied units. In each naturally-regenerated population investigated, the allele number was high, thus indicating a higher level of genetic diversity that is comparable with that seen in Norway spruce populations of other European countries. Significant differences in allelic frequencies were found at single loci, but mean values from all loci showed low genetic differentiation between units. The shares of observed heterozygosity ranged from 0.65 to 0.80 and expected heterozygosity from 0.74 to 0.81. Significant knowledge for forestry management is that subpopulations from the gene conservation unit located in Orlické hory showed closer genetic similarity compared to that seen in other populations. Pairwise population FST values were greater than zero and so confirm the structuring of the investigated Czech populations. Structuring of populations was confirmed also by the subsequent finding in accordance with the results of Nei’s standard genetic distances, where the populations SM 01 and SM 05, both of Hurst ecotypes, were the closest to one another and the populations of mountain and alpine ecotypes were assembled into another group. The relation between the genetic differences observed in Norway spruce ecotypes and local adaptation needs to be further investigated. Acquiring new knowledge about the genetic structure of coniferous species populations, especially in relation to valuable ecotypes of Norway spruce, is very important in order to both maintain the ecological stability of forests and for the optimization of timber production. The developed procedures of genetic monitoring with DNA markers will be used in the amendment of forestry legislation and in state subsidy policy in the area of protection and reproduction of forest tree gene resources. These procedures for verifying the genetic quality of selected Czech gene conservation units will be used for subsequent monitoring strategies of other gene conservation units. 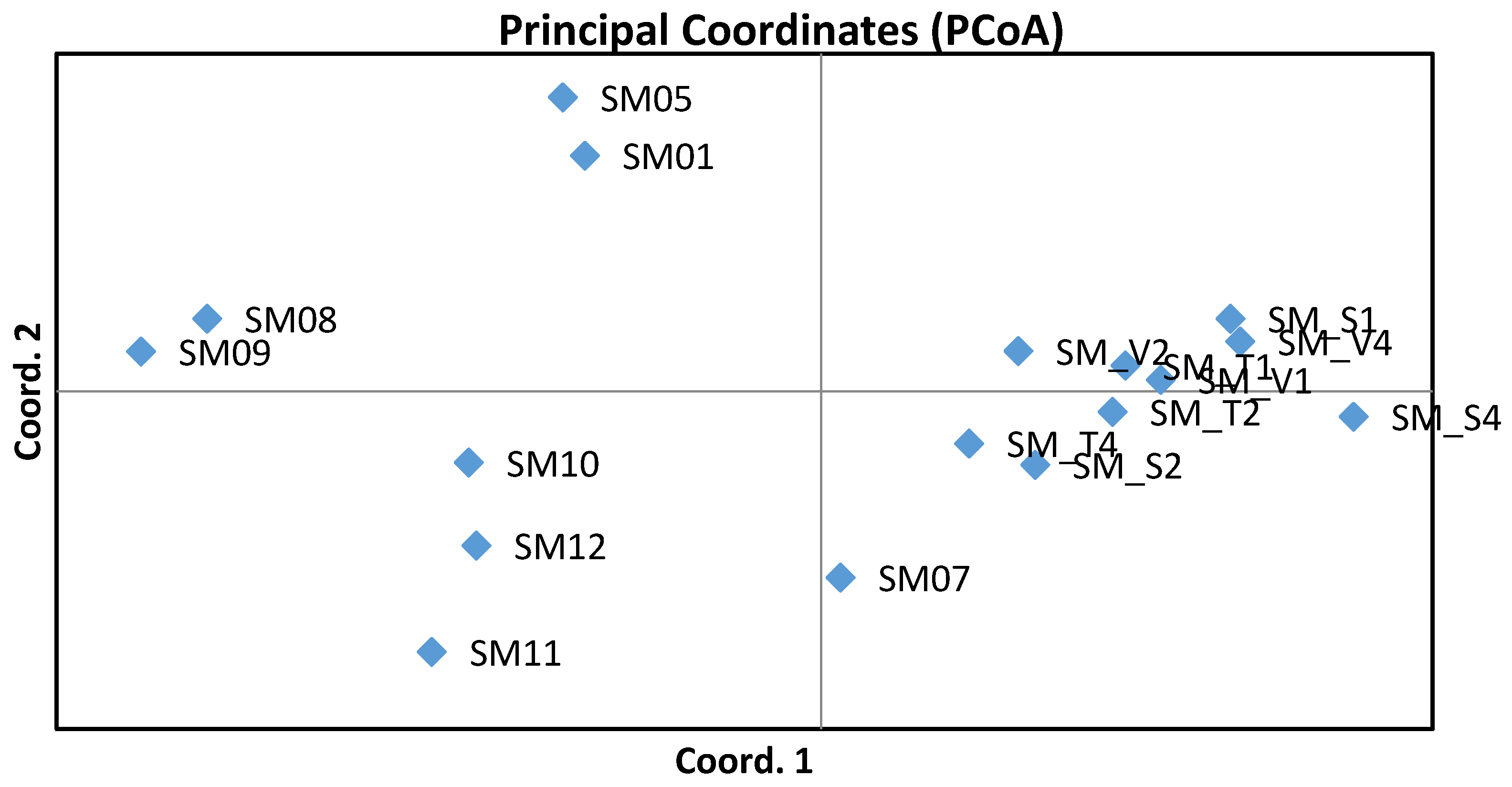