Land Use and Landscape Pattern Changes in the Sanjiang Plain, Northeast China

A tree list is a list of trees in the area of interest containing, for example, the species, diameter, height, and stem volume of each tree. Tree lists can be used to derive various characteristics of the growing stock, and are therefore versatile and informative sources of data for several forest management purposes. Especially in heterogonous and unmanaged forest structures with multiple species, tree list estimates imputed from local reference field data can provide an alternative to mean value estimates of growing stock (e.g., basal area, total stem volume, mean tree diameter, mean tree height, and number of trees). In this study, reference field plots, airborne laser scanning (ALS) data, and SPOT 5 satellite (Satellite Pour l’Observation de la Terre) imagery were used for tree list imputation applying the k most similar neighbors (k-MSN) estimation method in the West Ural taiga region of the Russian Federation for diameter distribution estimation. In k-MSN, weighted average of k field reference plots with highest similarity between field reference plot and target (forest grid cell, or field plot) based on ALS and SPOT 5 features were used to predict the mean values of growing stock and tree lists for the target object simultaneously. Diameter distributions were then constructed from the predicted tree lists. The prediction of mean values and diameter distributions was tested in 18 independent validation plots of 0.25–0.5 ha in size, whose species specific diameter distributions were measured in the field and grouped into three functional groups (Pines, Spruce/Fir, Broadleaf Group), each containing several species. In terms of root mean squared error relative to mean of validation plots, the accuracy of estimation was 0.14 and 0.17 for basal area and total stem volume, respectively. Reynolds error index values and visual inspection showed encouraging results in evaluating the goodness-of-fit statistics of the estimated diameter distributions. Although estimation accuracy was worse for functional group mean values and diameter distributions, the results indicate that it is possible to predict diameter distributions in forests of the test area with the tested methodology and materials.
Keywords: k most similar neighbor; lidar; tree list imputation; field verification k most similar neighbor; lidar; tree list imputation; field verification

The prediction model was tested with several values of k and set of independent variables. Here, we present the validation results with the optimal parameter values found in reference plot data. The optimal value found for k was 6. The number of independent variables used in the model was 14, including 11 variables derived from ALS data and three variables from SPOT 5 data (see Table S1 for selected variables). Five of the ALS variables were height percentiles, five variables described density at different relative or absolute heights and one variable was calculated as a product of height and density variable. SPOT 5 variables included mean values from band combinations 3 and 2 from multi-spectral and multi-spectral pan-sharpened images and mean of green band. Plot-level validation results are presented in Figure 2 with the validation results from the sparse Bayesian model that is presented in [24]. Based on plot level LOOCV and RMSE values, sparse Bayesian performed better than or equally well to the estimation of all but four parameters. K-MSN performed better for N, H, and D of Broadleaf Group, and for H of Spruce/Fir group. For most of the estimated parameters (12/20), the difference was smaller than three percentage units and for 18/20 it was less than seven percentage units. The largest differences (about 15 percentage units) in favor of sparse Bayesian were in H and D of Pines.

Based on the 18 independent test plots, the error and bias were small. There was no significant bias in the G estimates, however there was significant bias in estimates of N for all functional groups, except Pines (Table 3). Removing small trees from the test plot data improved both the error and bias of N but increased the error of G in Spruce/Fir and Broadleaf Group (Table 4). Ref. [24] reported RMSEs relative to the mean for V of 0.14 and 0.13 in 0.25 and 0.5 ha validation data, respectively. These are smaller values than that which we present here for k-MSN. In [24], the calculated RMSEs relative to the mean for G were 0.16 and 0.12 in the 0.25 and 0.5 ha validation data, respectively. These are at similar level with the value that was obtained in our results.
Estimates of diameter distributions were successfully produced for distributions of different shape. Distributions were investigated visually and by using Reynolds error index (Table 5). Figure 3, Figure 4 and Figure 5 show examples of the best, the average, and the worst agreement between estimated and measured distributions, according to the Reynolds error index. The order from best to worst was decided by summing up the Reynolds error index values of functional group and total distributions using all diameter classes. Reynolds error index values and visual inspection of goodness-of-fit seem to be congruent. As shown in Figure 3, the proportions of functional groups and the shape of the estimated distributions seems to fit well in the measured data. In Figure 4, representing an average goodness-of-fit, there is mixing of Pines and Spruce/Fir groups and the lower end of Spruce/Fir distribution is poorly estimated. This is typical for estimates: the estimated Spruce/Fir distributions are always skewed right, having a high proportion of trees in the smallest diameter classes. Figure 5 represents the worst goodness-of-fit. The distribution has wrong shape and the number of trees in Pines and Broadleaf Group are overestimated.

Diameter distributions and mean values of growing stock were estimated fusing field reference data, optical satellite data and ALS data in k-MSN estimation framework in Perm region, Russia. The estimation was successful in describing heterogenous structure of forests and multimodal distributions. However, the applied method with the available data was not able to capture the features of under canopy layer correctly. In general, the accuracy of mean value estimation was worse than with alternative method, sparse Bayesian regression, applied in earlier study. Albeit, the differences between RMSEs were small and for some mean values (variables describing mean tree size of under canopy trees or minor species) k-MSN produced more accurate results. The results obtained demonstrate that ALS-based systems fusing carefully measured field reference data and auxiliary optical data can be considered as alternatives to the commonly used field plot-based forest inventory, with preconditions considering species mapping. It is not feasible to map all species accurately with the method, and therefore, some grouping of species is required, and accurate estimates can be produced only for the main species. This means that it is possible to partly replace field work by ALS remote sensing and thus improve forest structure mapping methods. However, careful field control mechanisms are required for heterogenous forests and in case of mapping several species accurately. Future research and development is required to adjust methods for better describing under canopy layer and tree species proportions.

The following are available online at https://www.mdpi.com/1999-4907/9/10/639/s1, Table S1: Description of calculated ALS and SPOT 5 variables. Variables selected in k-MSN model are in bold.

This research was funded by the Ministry of Education and Science of the Perm region in the framework “International Research Groups” and its research project “Development of the automated technologies of forest inventory based on satellite imagery and airborne laser scanning”, grant number C-26/004.05. 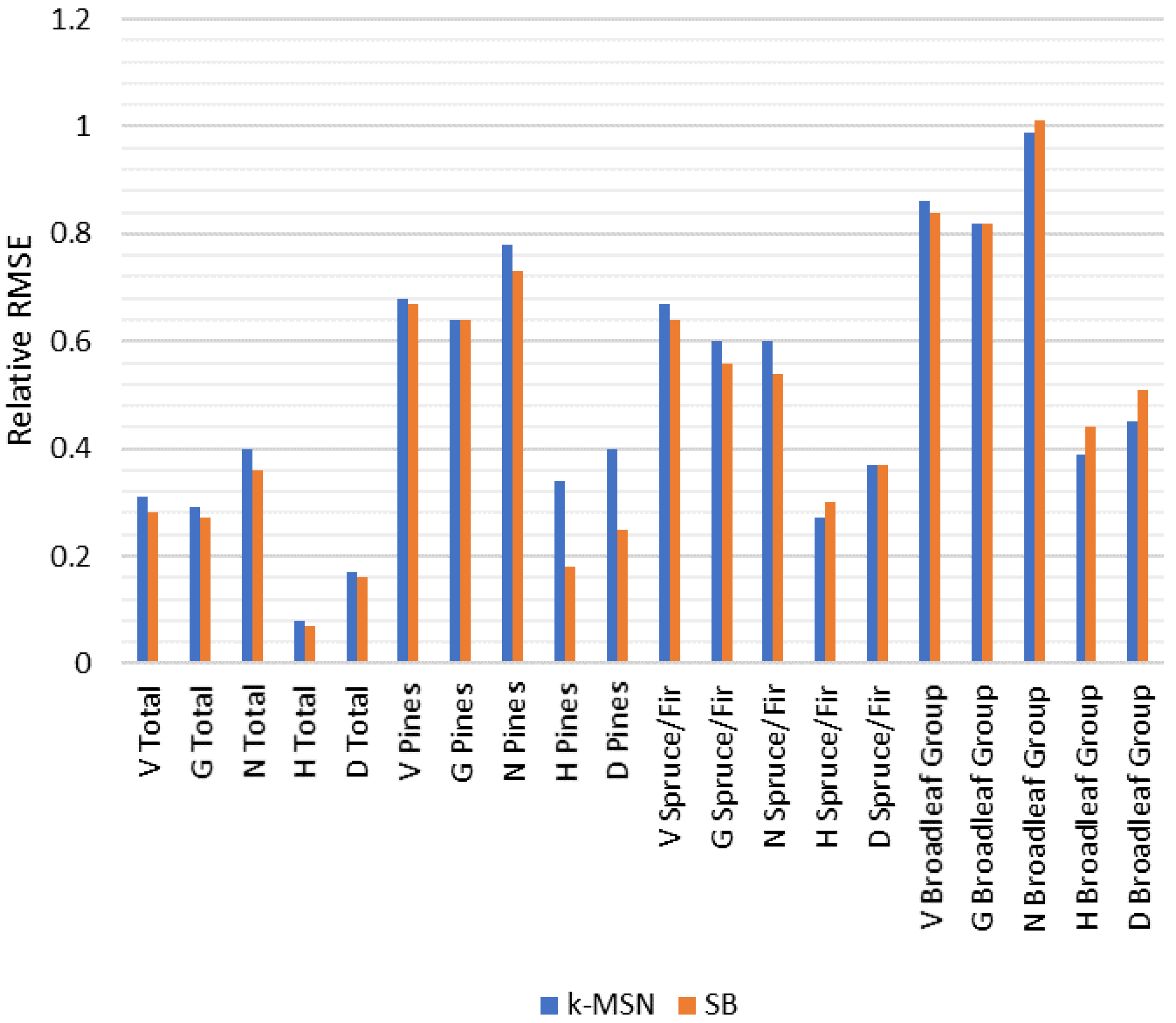 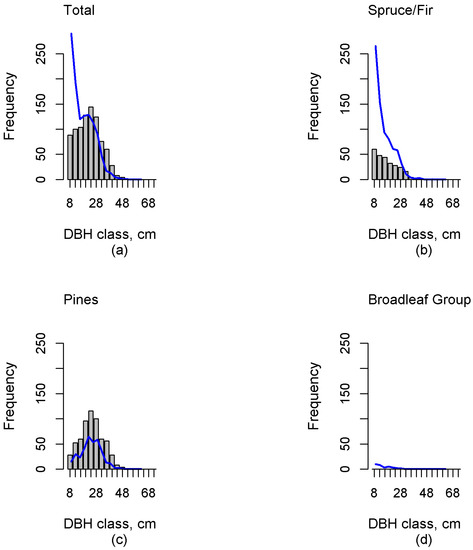 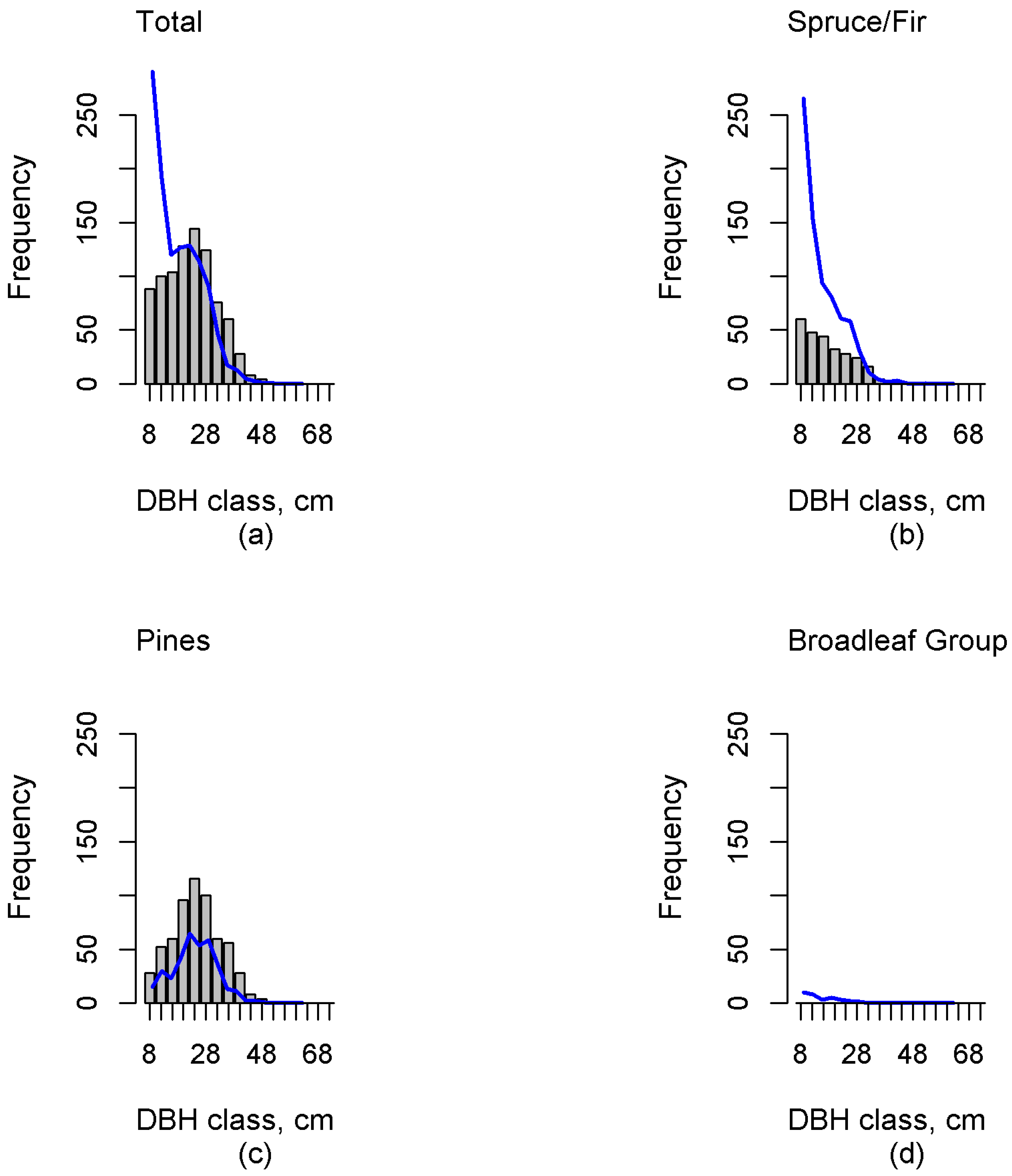 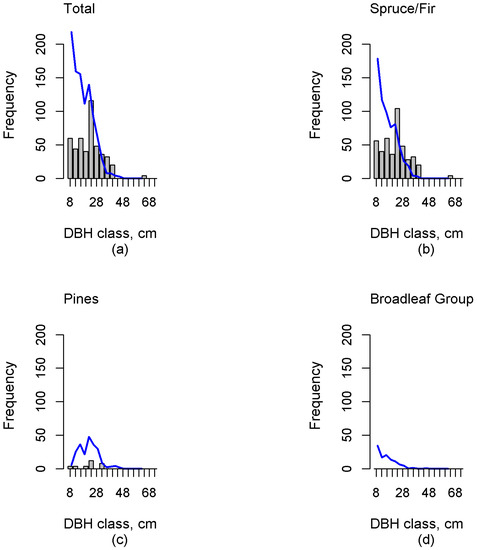