Article
Contribution of Ecological and Socioeconomic Factors to the Presence and Abundance of Invasive Tree Species in Mississippi, USA
by

Information on road density was obtained from the United States Geological Survey (USGS) [28] for year 2015; population density and per capita mean annual income data were from U.S. Census Bureau [29]; wildland urban interface (WUI) data for 2010 were from the WUI project [30]; and the others were from Forest Inventory and Analysis (FIA) program of the US Forest Service. The definitions of all ecological and socioeconomic factors were displayed below in Table 2.
When presence was the response variable, the proportion of invaded plots for each county was calculated. When the response variable was abundance, the weighted percent cover of each county was calculated by dividing the sum of all percent covers of any invaded plots in a county by the total number of plots in that county.

Using FIA data source, the distribution map of target invasive tree species in Mississippi was created (Figure 1). Seen from this figure, invaded plots with larger percent coverages of invasive tree species were mainly concentrated in southern coastal Mississippi.
The whole analysis was completed in a two-step process. In the first step, the Classification and Regression Trees (CART) analysis was used to identify the most relevant factors and exclude marginal relevant factors. CART is a great technique for leaving out the factors of marginal relevance and selecting the most relevant factors. At the same time, it can predict the dependent variables [31,32,33]. In the second step, the statistical analysis of these factors was implemented using the appropriate spatial autoregressive (SAR) models under R programming [34]. There are two SAR models, spatial error model and spatial lag model, corresponding to two dependent forms, error dependence and lag dependence [7].
The spatial error (SARerr) model assumes that spatial dependence influences the error term only. The SARerr model is complemented by adding an extra term () to the ordinary least square (OLS) model () and it has the following form: where λ is the spatial autoregression coefficient, W is the spatial weight matrix, ε is the error term in OLS model, and τ is the new error term.
The spatial lag (SARlag) model assumes that autocorrelation occurs in the explanatory variable only and thus includes a term () for the spatial autocorrelation in the explanatory variable. The SARlag model takes the following form: where γ is the spatial autoregression coefficient, W is the spatial weight matrix, and τ is the error term.
Lagrange Multiplier tests are usually used to identify the form of spatial dependence. Anselin [32] indicated that the test with the most significant result should be employed.

Using presence or absence as the response variable, a classification tree showing the most relevant factors was presented above in Figure 2. In most circumstances, the more records a variable has, the more important a variable is. The classification tree above showed that the most relevant factors associated with the presence of target invasive tree species in Mississippi included population density, elevation, per capita mean annual income, and ownership. In addition, when population density was less than 25.87 (nearly 26 inhabitants per square kilometer), target invasive tree species were not expected to be observed in Mississippi (Figure 2).
Using the percent coverage as the response variable, a regression tree showing the probability of a forest site being invaded by selected invasive tree species in Mississippi was presented in Figure 3. The regression tree indicated that the most relevant factors affecting the abundance of target invasive tree species in Mississippi included elevation, population density, per capita mean annual income, stand age, and growing stock. Seen from the first branch of the tree, if a plot with elevation greater than 75 feet was in a county with a population density less than 36.74 (nearly 37 inhabitants per square kilometer), the probability of this plot being invaded was 0.35%.
The classification and regression trees (CART) eliminated the side effects of other variables and presented the most relevant influence factors of invasive trees in Mississippi. However, they were non-parametric, and neither did they incorporate spatial dependencies. The spatial model should be employed after CART.

3.2. Results from the Spatial Lag Model

Among the variables evaluated, elevation had a negative effect on the presence and abundance of invasive tree species in Mississippi at the county level. The negative relationship between elevation and the number of exotic plants has been documented in some studies. Sax [36] found that the distribution of naturalized exotic species in Chile was highly associated with elevation and species richness. Gan et al. [8] also found that the occurrence of Chinese tallow in the southern United States was negatively related to elevation. A possible explanation might be that there are fewer appropriate plant species that could be introduced to higher elevation areas [37]. Lower elevation usually comes with warmer temperatures and less water. In Mississippi, the elevation ranges only from sea level at Gulfport to 806 feet (246 m) in the northeast hills, which doesn’t have a lot of variation. With higher elevations, temperature decreases and precipitation increases so fewer invasive tree species are found. Besides, the range of elevation change is small, which supports the idea that elevation didn’t play a substantial role even though it is significant.
It was not surprising that stand age had negatively influenced the abundance of invasive tree species at the county level. The negative relation indicated that invasive trees were prone to be abundant in young forests. Older forest communities were believed to be more resistant to exotic plant establishment while younger communities were more vulnerable to invasion in old fields in Minnesota [38]. Light availability might be the limiting factor because it was reported to vary with stand age [9,10]. In young forests, trees have not yet grown to be fully stocked, which creates sufficient sunlight for shade intolerant species. In this research, most of these invasive tree species are shade intolerant. The shade intolerance (i.e., light loving) characteristic of tree-of-heaven predicts that tree-of-heaven grows best in full sunlight, and at times, partial sunlight, and demonstrates best growth on open, disturbed sites. Mimosa grows best in full sun but tolerates some shade [39]. Princesstree is an early successional species that is strongly intolerant of shade [40,41,42]. One review indicated chinaberry is not shade tolerant, but it is unclear if chinaberry occurs as a shade intolerant or shade tolerant. Although Chinese tallow survives and grows in shade, it generally performs better in sunlight. In a floodplain forest in eastern Texas, Chinese tallow mortality increased from about 0.05% at 10% full sunlight to 5.3% at 0.1% full sunlight [43].
Per capita mean annual income was found to have a positive effect on the presence of invasive tree species at the county level. The original introduction purposes of invasive trees might explain the positive relation between income and presence. Most invasive species including tree of heaven, silktree were introduced to the United States as ornamentals while some were introduced accidentally through international trade such as princesstree. The possibility also existed that there was more gardening activity in higher income areas than lower income area. Besides, there was usually more transportation and commerce in higher income areas, which contributed to the spread of invasion. Due to the geographical advantages, the counties in southern Mississippi are generally more populated and have more commercial activities than those in the north.
Public ownership was negatively associated with the presence of invasive trees at the county level. The negative relationship indicated that invasions were more likely to occur on private forestlands. This finding was consistent with the research of the tallow tree in southern U.S. by Gan et al. [8]. In Mississippi, 81% of forests are owned by nonindustrial private landowners. It is quite possible that most landowners in Mississippi have their jobs and inherit several acres of forest from their parents or grandparents. Their initial intention is likely not to get monetary benefits, neither do they have professional knowledge to manage.
A unique aspect to this study is that our models incorporated socio-economics information. Research studies identified in the literature often study only ecological influence factors of exotic species, while only a few address socioeconomic factors in a meaningful way. Besides incorporating ecological factors, this research considered more socioeconomic factors such as road density, type of ownership, population density, per capita mean annual income and wildland-urban interface in the analysis. Another advantage is the methods and techniques. Many variables were of mariginal relevance and the distribution of ecological data was not normal. Therefore, Classification and Regression Trees (CART) analysis was used to help select most relevant factors, and avoid collinearity without any prior knowledge or assumption of the data distribution.
Another unique aspect to our research was the choice of a spatial lag model. Some previous research incorporated ecoregion as an explanatory variable to minimize the effect of spatial dependency. This research improved on that. The spatial lag model enabled it to eliminate spatial autocorrelation and analyze influence factor spatially. At last, this study treated presence and abundance as two distinct phenomena. Seen from the results above, factors affecting the presence and abundance of invasive trees in Mississippi were not the same. Based on this research, we would expect it would be easier for policymakers to distinguish which counties were more susceptible to invasion and which counties were more suitable for the growth of invasive tree species in Mississippi. If more efforts were focused on these most vulnerable counties, the prevention and eradication of invasive tree species in Mississippi could be implemented in the most cost-effective way.

This study was based on Jun Zhai’s graduate work and was supported by Forest and Wildlife Research Center, Department of Forestry, College of Forest Resources, Mississippi State University. 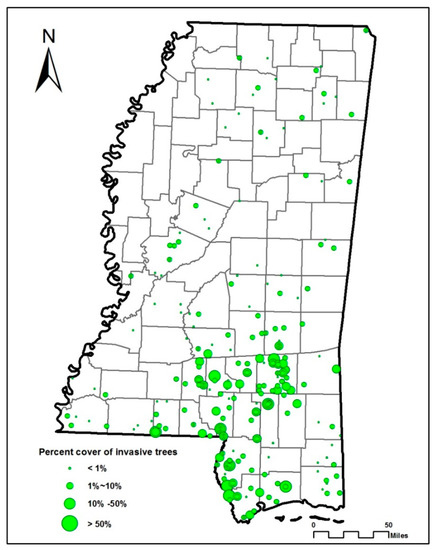 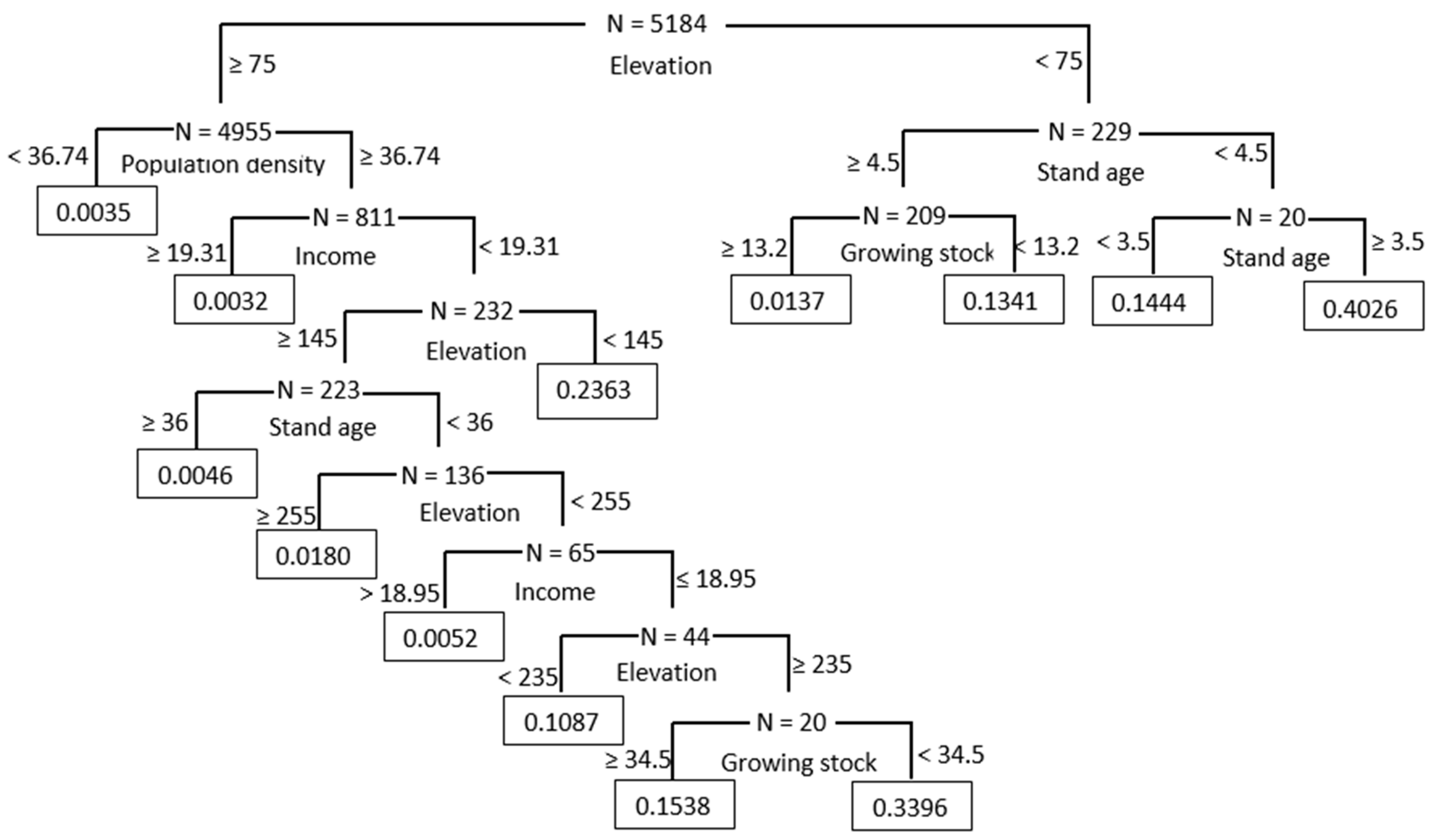