The Role of Environmental Filtering in Structuring Appalachian Tree Communities: Topographic Influences on Functional Diversity Are Mediated through Soil Characteristics

Environmental conditions and silviculture fundamentally alter the metabolism of individual trees and, therefore, need to be studied at that scale. However, changes in forest biomass density (Mg C ha−1) may be decoupled from changes in growth (kg C year−1) when the latter also accelerates the life cycle of trees and strains access to light, nutrients, and water. In this study, we refer to an individual-based model of forest biomass dynamics to constrain the magnitude of system feedbacks associated with ontogeny and competition and estimate the scaling relationship between changes in tree growth and forest biomass density. The model was driven by fitted equations of annual aboveground biomass growth (Gag), probability of recruitment (Pr), and probability of mortality (Pm) parameterized against field observations of black spruce (Picea mariana (Mill.) BSP), interior Douglas-fir (Pseudotsuga menziesii var. glauca (Beissn.) Franco), and western hemlock (Tsuga heterophylla (Raf.) Sarg.). A hypothetical positive step-change in mean tree growth was imposed half way through the simulations and landscape-scale responses were then evaluated by comparing pre- and post-stimulus periods. Imposing a 100% increase in tree growth above calibrated predictions (i.e., contemporary rates) only translated into 36% to 41% increases in forest biomass density. This corresponded with a tree-growth elasticity of forest biomass (εG,SB) ranging from 0.33 to 0.55. The inelastic nature of stand biomass density was attributed to the dependence of mortality on intensity of competition and tree size, which decreased stand density by 353 to 495 trees ha−1, and decreased biomass residence time by 10 to 23 years. Values of εG,SB depended on the magnitude of the stimulus. For example, a retrospective scenario in which tree growth increased from 50% below contemporary rates up to contemporary rates indicated values of εG,SB ranging from 0.66 to 0.75. We conclude that: (1) effects of warming and increasing atmospheric concentrations of carbon dioxide and reactive nitrogen on biomass production are greatly diminished, but not entirely precluded, scaling up from individual trees to forest landscapes; (2) the magnitude of decoupling is greater for a contemporary baseline than it is for a pre-industrial baseline; and (3) differences in the magnitude of decoupling among species were relatively small. To advance beyond these estimates, studies must test the unverified assumptions that effects of tree size and stand competition on rates of recruitment, mortality, and growth are independent of climate change and atmospheric concentrations of carbon dioxide and nitrogen. View Full-Text
Keywords: tree growth; forest biomass density; tree-growth elasticity; individual-based model; forest growth enhancement; forest growth decline tree growth; forest biomass density; tree-growth elasticity; individual-based model; forest growth enhancement; forest growth decline
►▼ Show Figures 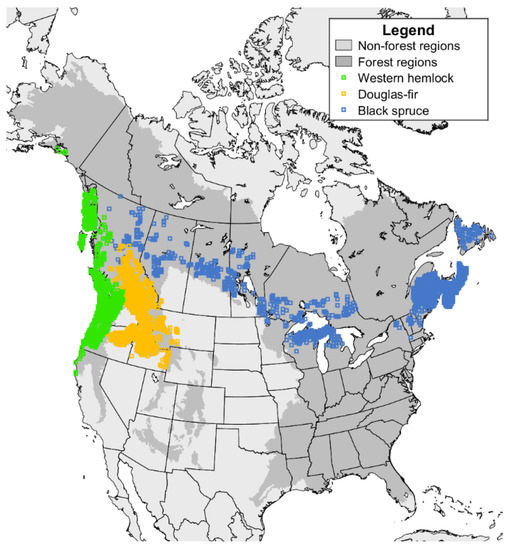