The Effect of Silver and Copper Nanoparticles on the Condition of English Oak (Quercus robur L.) Seedlings in a Container Nursery Experiment
Previous Article in Special Issue

Arctic sea-ice extent (ASIE) during winter 2017 was the lowest recorded value since satellite records began in 1979 and monthly ASIE levels in the past year were consistently more than two standard deviations below the 1981–2010 average [1]. Accelerated warming in the Northern Hemisphere polar region, termed Arctic amplification [2] is concurrent with the rapid loss of Arctic sea-ice extent of approximately 11%/decade [3] and a 65% reduction in sea-ice thickness since 1975 [4]. In turn, ASIE and the strength of the polar vortex have been linked [5,6], with some of the most noticeable impacts experienced as anomalously cold winter conditions in the eastern North American mid-latitudes [2] and western North American anticyclogenesis [7,8]. However, warm-season impacts associated with increased meridionality and persistence also occur [9,10,11], including more frequent ridging (i.e., higher atmospheric pressure) over the Pacific Northwest and Northern Rockies regions of the coterminous U.S.
The relationships between ASIE, atmospheric flow patterns/modes of variation (e.g., North Atlantic Oscillation; NAO), and surface weather conditions are complex [12], and likely synergistic with other potential controls such as snow cover extent in Eurasia [13]. Our understanding of the processes is constantly evolving (e.g., [13,14]) with recent research suggesting that, among others, ASIE is potentially a controlling factor or interacts with (1) the Atlantic multidecadal oscillation (AMO; [14]); (2) the NAO [13,15]; (3) the western Pacific pattern (WP) and El Nino Southern Oscillation (ENSO; [15]); (4) declining summertime total kinetic energy and zonal flow [16]; (5) the Pacific Decadal Oscillation (PDO; [17]); (6) surface temperature extremes [10]; and (7) surface precipitation extremes [18,19]. An example of the evolution of our understanding of the linkages includes studies [13,20], which found that contrary to earlier work based on empirical data [2,5], model simulations show that lower levels of ASIE are associated with reductions in wintertime cold events in Northern Europe, not increases in these events. In summary, atmospheric perturbations associated with reduced ASIE tend to promote climatic extremes associated with enhanced variance of upper-level flow patterns. In western North America, persistent warm-season ridging results in a combination of extreme heat and drought, factors known to promote wildfire activity [21,22,23].
Marked increases in wildland fire activity and the cost associated with fire control during the past two decades [24] have been concurrent with declining ASIE, suggesting a potential interactive effect. During 1995–2015, costs associated with wildland fire as a percentage of the Forest Service’s annual budget increased from 16% to 52% and are projected to be 67% of the budget by 2025 [24]. Rising costs are attributed to (1) an increased fire-season length of 78 days relative to 1970 increasing the “frequency, size and severity of wildland fires”; (2) an increased Wildland–Urban Interface where higher density human populations and associated infrastructure require additional firefighting resources; and (3) ecosystem changes related to changing climatic conditions that have enhanced fire activity through an increased volume of fine fuels (p. 3 [24]). Increases in western U.S. fire season are largely attributed to warming spring and summer temperatures and snowmelt occurring earlier in spring [22,25] with a key factor being increased meridionality associated with Arctic amplification [2,26] driven by declining ASIE. Here, we examine the relationship between reduced sea-ice cover and increased wildfire activity for seven regions in the western U.S. Specifically, we hypothesize that a spatio-temporal linkage between ASIE and upper-level flow exists and modulates surface climatic conditions in the western U.S. that are favorable for enhanced wildfire activity.

We obtained annual wildfire data (hectares burned) during 1980–2014 from the Federal Fire Occurrence website [27] and data for 2015 from the December 2015 National Incident Management Situation Report [28]. We grouped fire data by the seven Geographic Area Coordination Center (GACC) regions for the western U.S., which includes the Great Basin (GB), Northern California (NC), Northern Rockies (NR), Northwest (NW), Rocky Mountain (RM), Southern California (SC) and Southwest (SW) regions (Figure 1). Data for each region included all wildland fires on state and federal lands regardless of ignition source or fuel type.
We obtained monthly ASIE data during 1980–2015 from the National Snow and Ice Data Center [29]. ASIE data for the entire Arctic region were complete with the exception of December 1987 and January 1988. We also obtained monthly regional ASIE data during 1980–2015 for five of the ten regions identified by the Arctic Regional Ocean Observing system (Barents Sea; Greenland Sea; Baffin Bay; Bering Sea; East Siberian Sea; see [30] for regions). Data for the other five regions were not available during the early part of our study period and therefore were excluded from analysis.
We compared total and regional monthly ASIE (prior year December through current-year September) with annual wildfire activity by GACC region and all regions combined (hereafter “Combined”) during the common period of 1980–2015 using Spearman’s correlation as the wildfire data were non-normally distributed. We examined spatial pattern correlations over the region congruent with the seven GACC regions between ASIE and: (1) gridded 2.5 by 2.5 degree upper-level atmospheric flow (300-hPa) from the NCEP/NCAR Reanalysis 1 [31]; (2) ASIE and gridded 1.0 × 1.0 degree maximum and minimum temperature from Berkeley Earth [32]; (3) ASIE and gridded 0.25 × 0.25 degree precipitation from PRISM [33]; and (4) gridded 2.5 × 2.5 degree soil moisture from the NCEP/NCAR Reanalysis 1 [31] using KNMI Climate Explorer [34].
We calculated wildfire trends for each region and the Combined region using the Theil-Sen non-parametric trend slope and tested for significance using the Mann–Kendall test [35]. The Theil-Sen slope estimate is the median of all slopes between each set of data points and is minimally affected by the influence of outliers [36]. Thus, the test is particularly suitable when working with datasets that are characterized by considerable interannual variability such as extreme fire years (e.g., [23]). We also tested for possible temporal autocorrelation of the wildfire data using the Durbin–Watson test [37] and determined that residuals were not autocorrelated for either the GACC regions or the Combined region.

We have identified a new and potentially substantive connection between decreasing ASIE and increasing wildfire activity in the western U.S. during 1980–2015, which if operative represents the strongest multi-region-wide climate teleconnection (cf. ENSO and PDO) examined for the western U.S. Understanding the linkages between Arctic amplification and enhanced meridionality of mid-latitude upper-level atmospheric flow remains uncertain and may express strong regional, seasonal and interannual variability [68]. Here, our findings suggest a broad-scale teleconnective feature related to ASIE that indirectly modulates wildfire activity with evidence that summertime 300-hPa flow is influenced by prior-winter ASIE. Specifically, we identify a temporally consistent response between wintertime ASIE and increased 300-hPa ridging, higher temperatures, and drier conditions during fire season that are congruent with conditions favorable for increased wildfire activity.
A better understanding of the possible atmospheric teleconnections related to ASIE is needed to improve future projections of climatic control of western U.S wildfire activity, specifically the increasing meridionality of 300-hPa circulation. Given the recent trajectories for declining ASIE, model projections for increased fire potential in the U.S. under a changing climate [69], and recent large increases in the costs of managing U.S. wildfire activity [24], it is likely that fire management activities and the associated costs will continue to rise in the coming decades. Future research may benefit from the addition of finer-resolution fire and climate data allowing for a more precise geographical analysis of the areas that are most vulnerable to changing climatic conditions associated with decreasing ASIE. 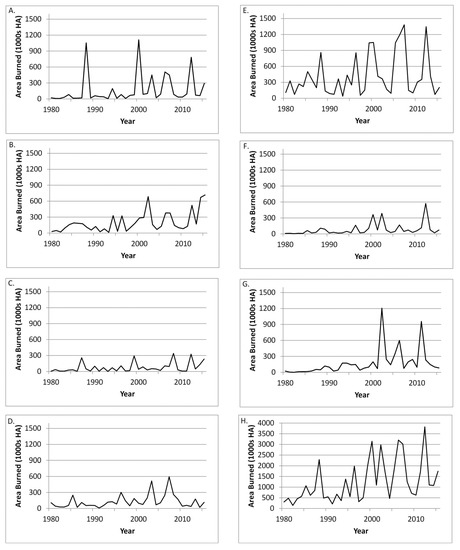 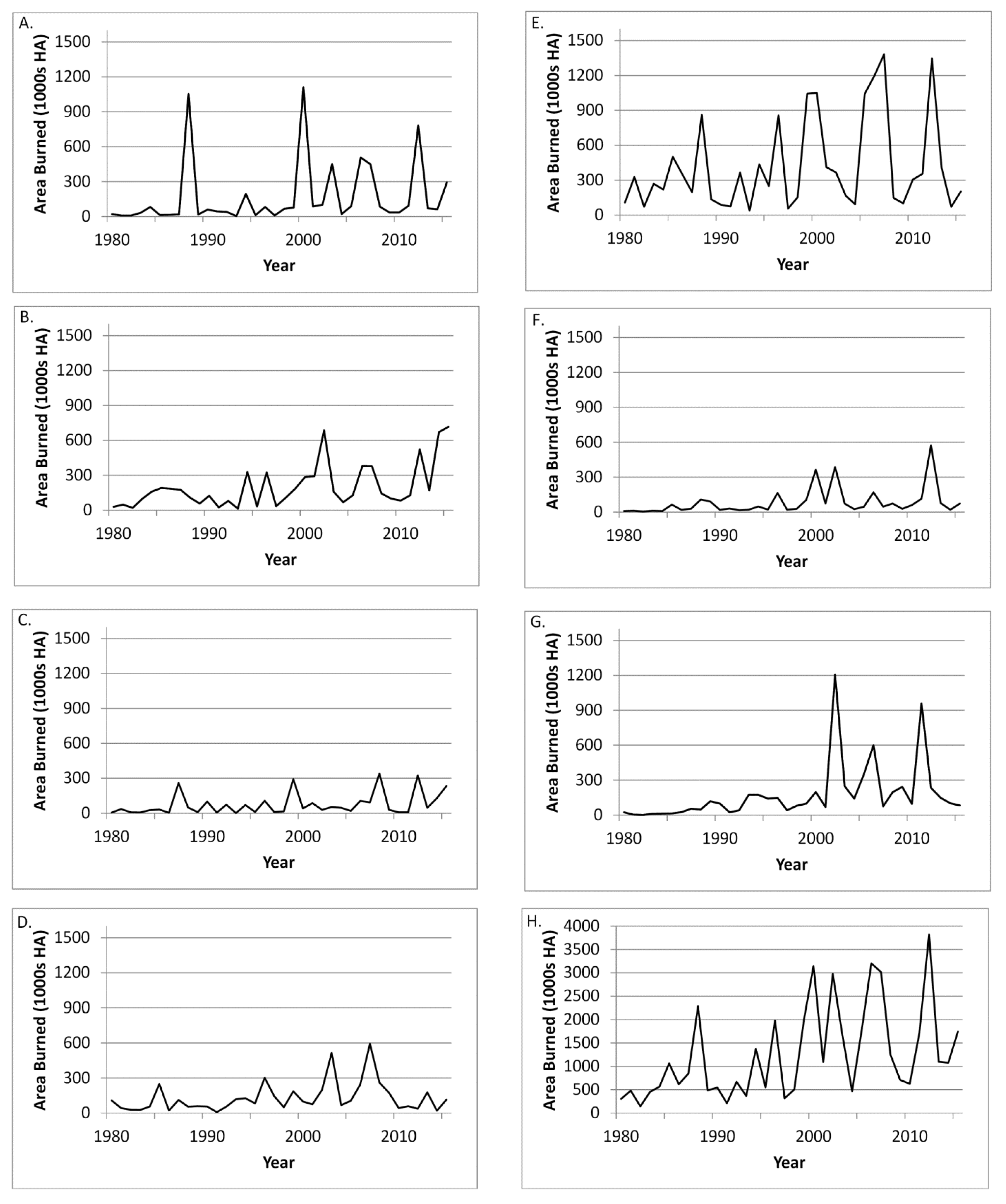