Forests and carbon sequestration have become fundamental themes in climate change mitigation. The idea of Reducing Emissions from Deforestation and forest Degradation (REDD+) has generated significant interest in forest governance from United Nations (UN) climate strategies over the past decade. REDD+ was initially hailed as a smart and cost-effective way to mitigate climate change. As it is rolling out, ambiguities and controversies are increasingly surfacing to the stakeholders at different levels. Examining the forest governance of Nepal in detail, this research examines how relationships between national and local forest actors have changed, and how REDD+ discourses have evolved among them at the interface between global interests in carbon commodification on one hand, and local realities of community forestry on the other hand. To better understand these competing positions, the study uses a post-structural political ecology perspective with elements of discourse analysis. Using data from interviews with policy actors and members of three local community forest user groups, focus group discussions, policy event observations, and document reviews, this paper highlights how global forest carbon commodification has been affecting community forestry governance. It also illustrates different storylines that actors employ to influence policy discourse and REDD+ debates, indicating a considerable range of problem definitions and policy solutions of climate change among the actors. The analysis highlights the connection between power relationships and the evolution of discourses surrounding REDD+, and how an external discourse can reinforce or challenge local governance and the centralization of forest authority. As such, the research also offers a new application of discursive storylines to climate change discourse analysis across national and local scales. The findings emphasize the importance of a more open and transparent dialogue across Nepal’s forest governance and management levels to ensure actual benefits for healthy forests, strong communities, and effective climate change mitigation. Nepal's findings also suggest highly relevant lessons to other developing countries with significant community forest governance, and a strong planned focus on REDD+. View Full-Text
Keywords: carbon trade; carbon sink; common-pool resource management; forest governance; livelihoods; policy development; UNFCCC carbon trade; carbon sink; common-pool resource management; forest governance; livelihoods; policy development; UNFCCC
►▼ Show Figures 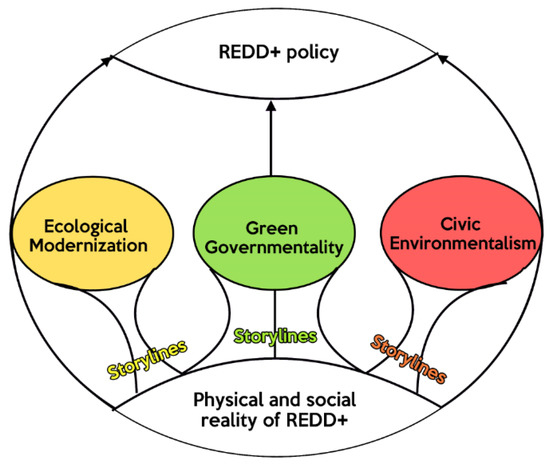