:
Tree genetic diversity is among the most important factors determining the sustainability of forest ecosystems. The main aim of the present study was to track possible changes in genetic diversity of regenerating populations of Norway spruce (Picea abies (L.) H. Karst) and Scots pine (Pinus sylvestris L.) in areas subjected either to a natural disturbance (windthrows and subsequent clear-cutting of the affected spruce stand) or to a changed land-use legacy (pine regeneration on abandoned agricultural land) with the aim of testing whether the new forest generation retains the genetic diversity of the putative maternal stand. Eight highly polymorphic microsatellite loci were used to reveal the genetic diversity and its spatial distribution in the studied tree populations. Self-regenerating juveniles of Norway spruce and Scots pine were spatially random and as genetically diverse as in the putative maternal populations. Genetic differentiation between putatively maternal trees and regenerating juveniles was low for both species. A high genetic diversity and random spatial genetic structure revealed in the regenerating populations provides a basis for the formation of evolutionary and ecologically sound stands able to adapt to ever-changing climatic conditions. Information on the genetic dynamics of the studied natural populations of long-lived coniferous tree species may be important for evaluating possible changes in genetic diversity at a local scale following forest ecosystem disturbances and changes in land-use legacies.
Keywords:
climate change; disturbances; Europe; maternal stand; microsatellite genotypes; progeny; tree populations

Information on the genetic dynamics of natural populations of long-lived coniferous tree species may be important in forecasting the trends of changes in genetic diversity at a local scale following forest ecosystem disturbances and changes in land-use legacies. Results of the present study showed that in the investigated sites self-regenerating juveniles of Norway spruce and Scots pine were able to maintain spatially random genetic structure. and as high genetic diversity as in putatively maternal stands. The retained substantial genetic diversity in the juvenile progeny suggests that studied regenerating populations of these important tree species have good potential to adapt to changing climatic conditions. However, regular genetic monitoring is needed with the aim of tracking changes in the genetic properties of forest tree populations under changing climatic conditions and to be able to preclude and/or to compensate genetic diversity loss which is inevitable under current intensive forest management activities. In our study, both the spruce and pine sites were unreplicated, although the selected sites were chosen to be representative for Lithuania, i.e., typical Norway spruce and Scots pine habitats with typical regeneration. We cannot exclude the possibility of obtaining different results from other sites. Further studies, including more replications from different sites representing areas affected by the respective natural disturbance (regenerating forest on cleared spruce windthrow sites and changed land-use legacy; regenerating pine forest on abandoned agricultural lands), are therefore needed to draw broader conclusions.

This study was funded by Lithuanian Research Council, as part of National Scientific Program project “Response and plasticity of different tree species & juvenile-stage forest communities under impact of climate change and other environmental stressors” MIŠKOEKOKAITA No. SIT-4/2015.

A.P., R.V. and V.S. conceived, designed and performed the study, R.V. and V.L. analysed the data, V.S. and J.L. contributed and designed the collection of plant materials, R.V., A.P., V.L. and J.J. wrote the paper. 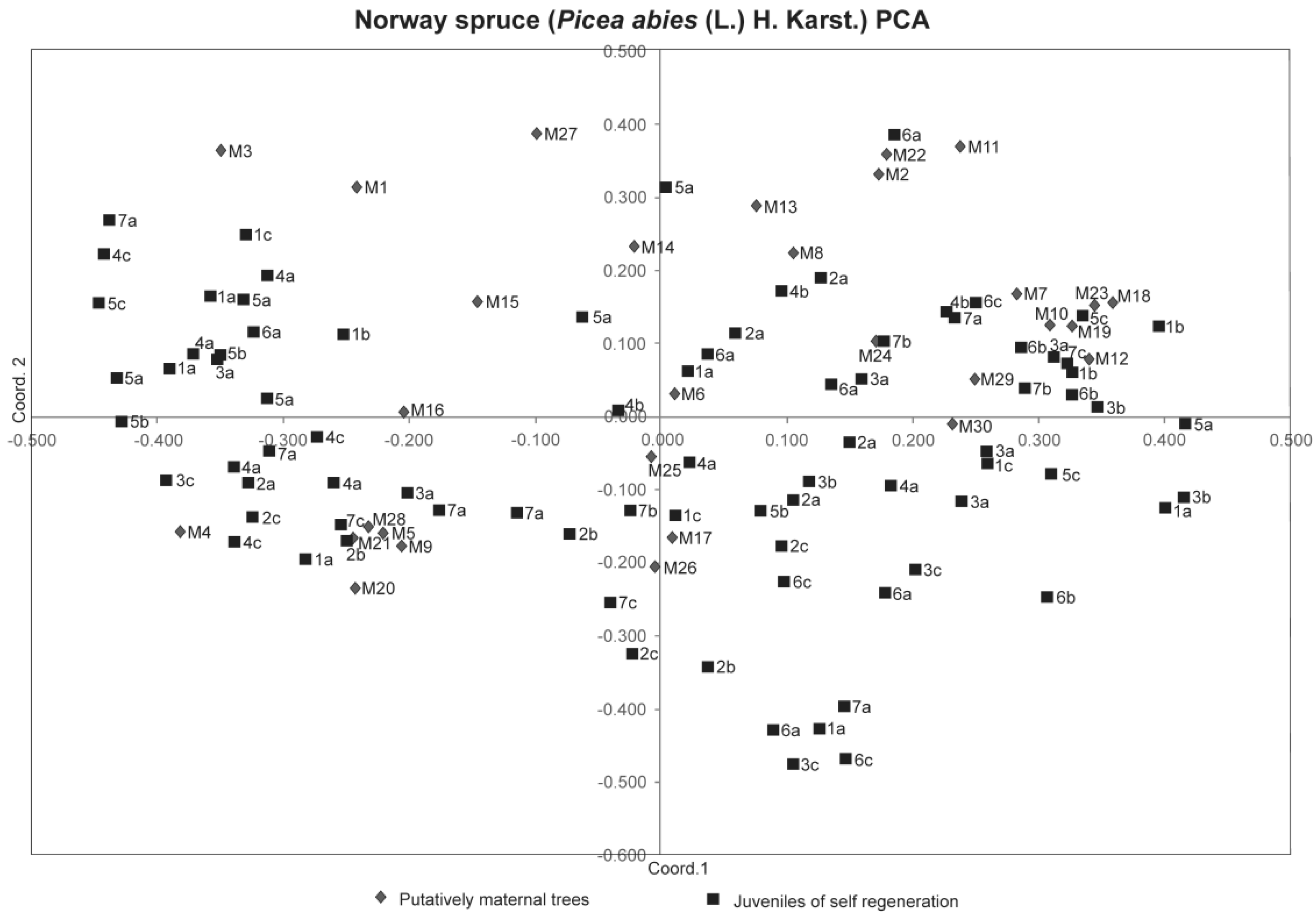 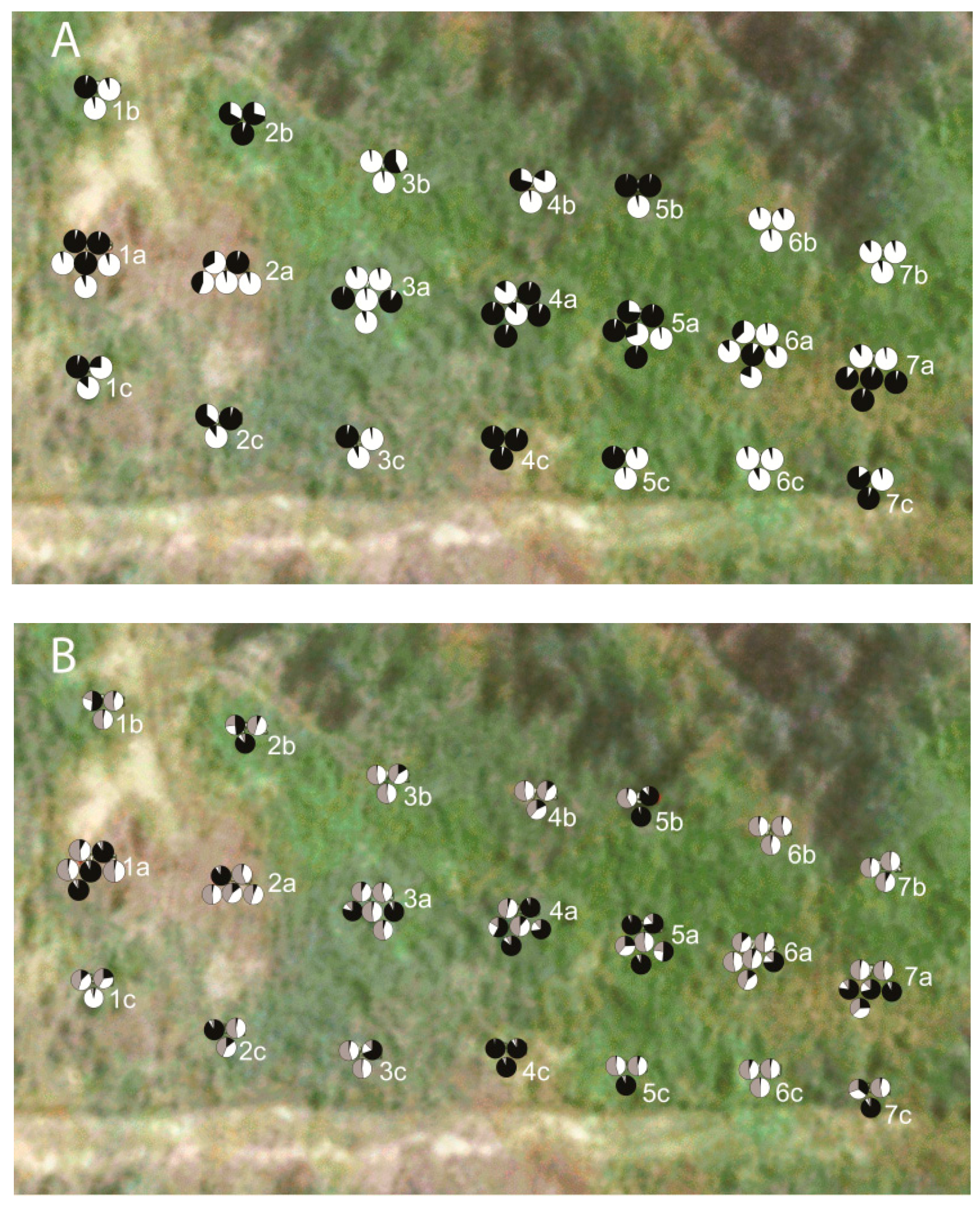