Laurel Wilt in Natural and Agricultural Ecosystems: Understanding the Drivers and Scales of Complex Pathosystems
Previous Article in Journal

Red band needle blight caused by Dothistroma septosporum and D. pini, and brown spot needle blight caused by Lecanosticta acicola provoke severe and premature defoliation in Pinus, and subsequent reduction of photosynthetic surfaces, vitality, and growth in young and adult trees. The recurrent damage results in branch and tree death. Until recently, pine needle blight diseases have had only minor impacts on native and exotic forest trees in the North of Spain, but in the past five years, these pathogen species have spread widely and caused severe defoliation and mortality in exotic and native plantations of Pinus in locations where they were not detected before. In an attempt to understand the main causes of this outbreak and to define the effectiveness of owners’ management strategies, four research actions were implemented: a survey of the management activities implemented by the owners to reduce disease impact, the evaluation of specific symptoms and damage associated with infection, and the identification of the causative pathogenic species and their reproductive capacity. Morphological characteristics of the fungus and molecular identification were consistent with those of Lecanosticta acicola and Dothistroma spp., D. septosporum, D. Pini, and both mating types were present for the three identified pathogens. The local silvicultural management performed, mainly pruning and thinning, was not resulting in the expected improvement. The results of this study can be applied to establish guidelines for monitoring and controlling the spread of needle blight pathogens. View Full-Text
Keywords: needle blight; Pinus; defoliation; Dothistroma; Lecanosticta needle blight; Pinus; defoliation; Dothistroma; Lecanosticta
►▼ Show Figures 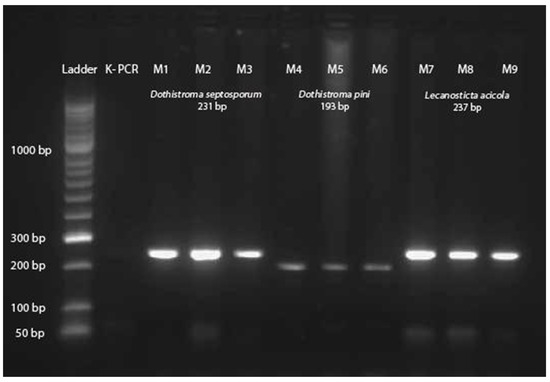