Fuel Classes in Conifer Forests of Southwest Sichuan, China, and Their Implications for Fire Susceptibility
Previous Article in Journal

In this study, wood disks of 30 mm in thickness cut from white birch (Betula platyphylla Suk) logs were dried at a constant temperature (40 °C). The drying strains including practical shrinkage strain, elastic strain, viscoelastic creep strain and mechano-sorptive creep were measured both tangentially and radially. The effects of moisture content and radial position on each strain were also discussed qualitatively. Overall, the difference of the practical shrinkage strain between the tangential and radial directions was proportional to the distance from the pith. The tangential elastic strain and viscoelastic creep strain were higher than these strains in a radial direction, and they all decreased with the decrease of moisture content. Additionally, there were opposite mechano-sorptive creep between tangential and radial directions.
Keywords: drying stresses; drying strains; wood rheological behavior; white birch disk drying stresses; drying strains; wood rheological behavior; white birch disk

Cutting wood logs into thin disks is advantageous to better understand the evolution of drying stresses because of the possibility to control the moisture content gradient longitudinally and compare drying strains between the tangential and radial directions. It also provides a better method for using small-diameter or crooked logs than when lumber is cut lengthwise; this occurs because waste is much less when logs are cut into cross sections during the logging and sawing processes [1]. However, with wood as an anisotropic material, drying defects emerge more readily in wood disks than in lumber. There are a variety of reasons, such as the difference of the shrinkage ratios in the tangential and radial directions, and material heterogeneity that wood cross sections always include both heartwood and sapwood or perhaps both juvenile and mature wood.
Drying defects are often linked to drying stresses which can be approximated by measuring drying strains. From wood rheological theory, the components of drying strains comprise free shrinkage strain, elastic strain, viscoelastic creep strain and mechano-sorptive (MS) creep. The survey of these strains will provide an effective foundation for forecasting and analyzing drying stresses. Extensive studies on this topic have been carried out. The MS creep phenomenon of wood was first proposed reported by Armstrong [2]. Rice and Youngs found that MS creep is the major component of strain and it is a function of moisture change during drying of red oak [3]. Wu and Milota investigated the tangential MS deformations of Douglas fir in both desorption and absorption processes [4,5]. Takahashi et al. found that the creep behaviors of Japanese cypress are different during the drying process, immediately after drying, and after a long period of conditioning under constant humidity and temperature [6]. Perre and Passard proposed a comprehensive model to predict drying stress evolution based on MS creep at different temperature levels [7]. Lazarescu and Avramidis investigated elastic, viscoelastic, MS and plastic strains developed in a perpendicular direction to the grain of restrained wood [8]. The tangential, radial and longitudinal shrinkage strain in jack pine were measured by Peng et al. [9,10]. Zhan and Avramidis separated MS creep from viscoelastic creep strain and determined the relative magnitude of each drying strain under different drying temperatures [11,12]. Larsen and Ormarsson reported on the moisture-induced strains and tensile strength in a tangential direction under different climatic conditions based on finite element modeling [13,14]. That is the most written about topic for a long time, but no research has been published on the difference of drying strains between the tangential and radial directions.
The present study was conducted to investigate the variation of practical shrinkage strain, elastic strain, viscoelastic creep strain and MS creep between the tangential and radial directions in white birch (Betula platyphylla Suk). The effects of moisture content and radial position on each strain were also discussed.

Wood for this study was obtained from forests in the region of the Lesser Khingan Mountains, located in northeastern China. The density of wood was 495–607 kg/m3 with moisture content higher than 60% and a diameter at breast height of 250 mm. One plantation white birch (Betula platyphylla Suk) tree was first sawn into one hundred wood disks of 30 mm in thickness starting at a distance of 0.3 m from the roots and then numbered, wrapped with plastic film, and stored in a freezer to prevent water loss and decay. Ten wood disks without visual defects were randomly selected from the prepared wood disks for drying experiment, of which one was used to determine the green moisture content, three were for determining target moisture content (26%, 18% and 10% moisture content for wood disks during drying), and the remaining six were for strain studies. Two replications were carried out.
The drying experiment was conducted in a GDS-100 conditioning chamber (Shanghai Scientific Instruments Yiheng Co., Ltd., Shanghai, China). Table 1 illustrates the detailed drying conditions. The temperature was held constant at 40 °C and the relative humidity slowly decreased. The relative humidity was adjusted and corrected by changing wet-bulb depression and a RS-13H dry-wet bulb thermometer (Espec Techno Corp Co., Ltd., Osaka, Japan,), respectively. The target moisture contents were determined using the oven-dry method with a temperature of 103 ± 2 °C for 24 h. The drying strains including practical shrinkage strain, elastic strain, viscoelastic creep strain and MS creep were measured and distinguished by image analysis, which is a noncontact method based on dot pitches. The camera lens (1628 × 1236 resolution) was fixed on a perpendicularly placed tripod and kept 200 mm from the test plane. Before drying, red stains were sprayed on the polished surface of the disks, using oil-based pike (Figure 1). While drying to the target moisture content of 26%, 18%, and 10%, taken two of the wood disks out from conditioning chamber and cut each one into 18 test specimens along the grid lines, and also the images of the disks (including a scale-plate) were taken before and after cutting. Thereafter, the images were imported into specialized software Image J (National Institute of Mental Health, Bethesda, MD, USA.) for measuring and analyzing the actual length of the two red stains. By comparing the changes of dot pitches, the strain values can be obtained.
Fu et al. provide the schematics and calculation formula related to the method [15,16]. The details are as follows:
Practical shrinkage strain: εps = (L0 − L1)/L0
Elastic strain: εes = (L1 − L2)/L0
Viscoelastic creep strain: εve = (L2 − L3)/L0
Mechano-sorptive creep: εms = (L3 − L4)/L0
where L0 is the distance of two measuring dots on the strain slices under green conditions;
L1 is the distance of two measuring dots on the strain slices before cutting at 26%, 18%, and 10% moisture content;
L2 is the distance of two measuring dots on the strain slices when the wood disk is split along the grid line;
L3 is the distance of two measuring dots under stable moisture conditions, achieved by placing the strain slices in a conditioning chamber with equilibrium moisture content equal to moisture content when the slice is split;
L4 is the distance of two measuring dots with the strain slices soaked in water for 24 h, steamed for 10 h, and placed in a conditioning chamber to maintain the temperature and humidity conditions in L3.
To analyze the strains in different radial positions, the following regions were observed separately: heartwood i.e., 10 to 20 mm from the pith, mixed wood (transition between heartwood and sapwood) 30 to 60 mm, and sapwood 70 to 90 mm.
The shrinkage radio in tangential and radial directions are calculated with the following formulas:
Tshrinkage radio = [(Tgreen dimension − Tdry dimension)/T green dimension] × 100%
Rshrinkage radio = [(Rgreen dimension − Rdry dimension)/Rgreen dimension] × 100%

3.2. Difference of Shrinkage Ratios between the Tangential and Radial Directions

3.3. Variations of Drying Strains between the Tangential and Radial Directions 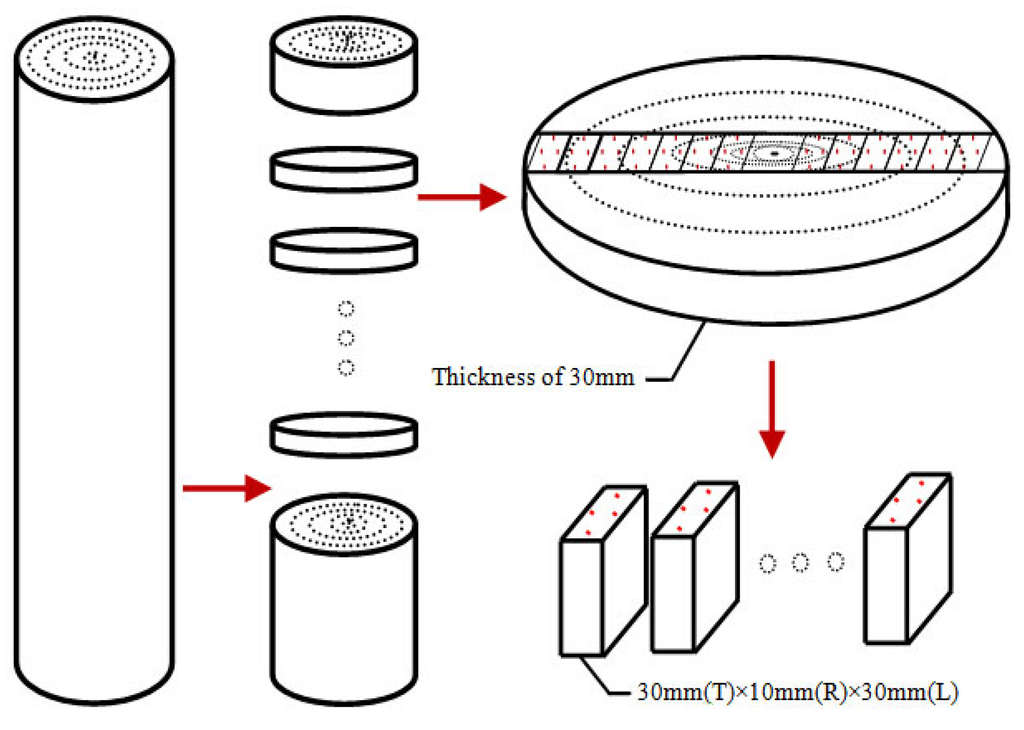 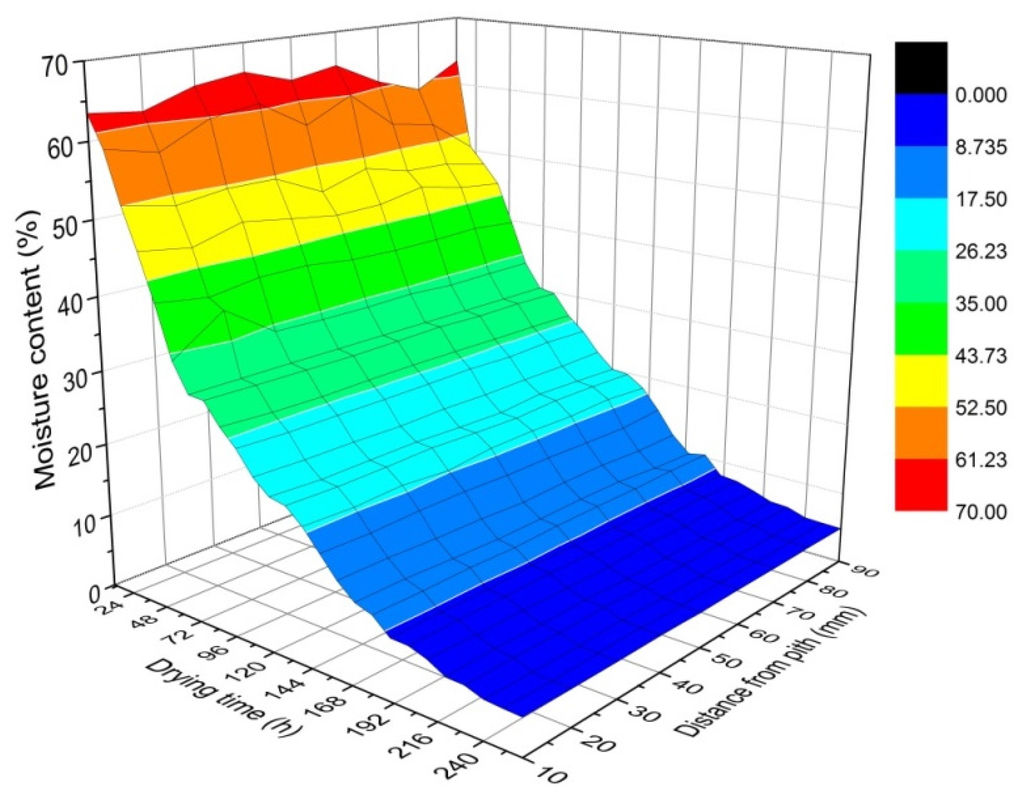 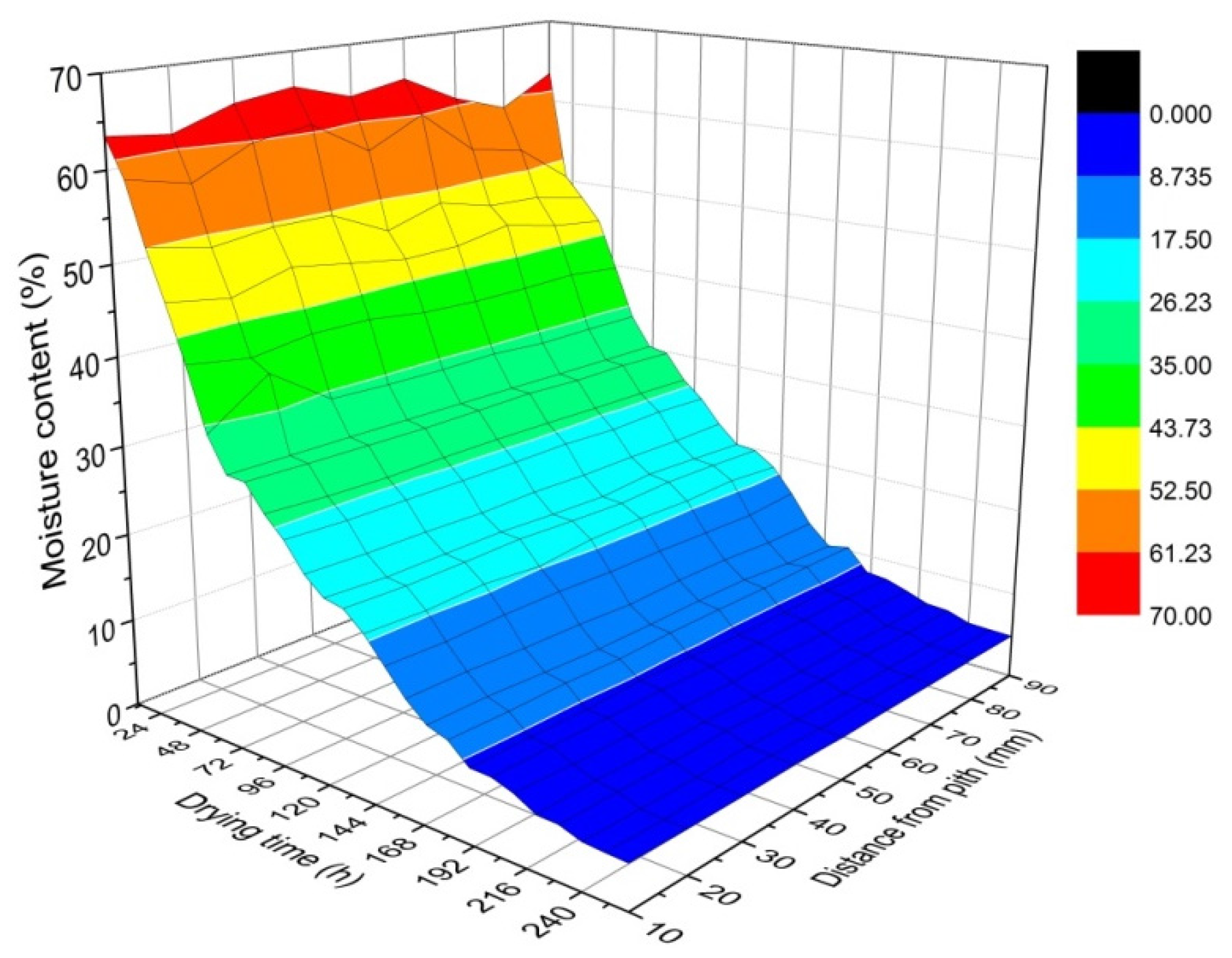 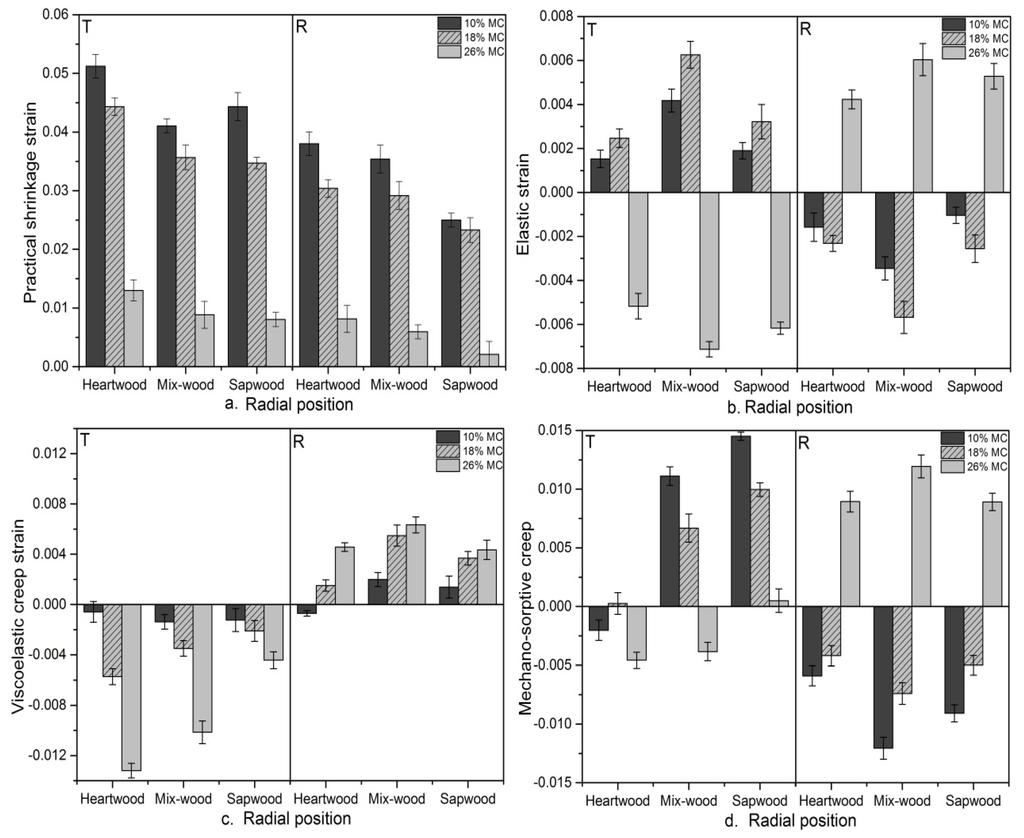 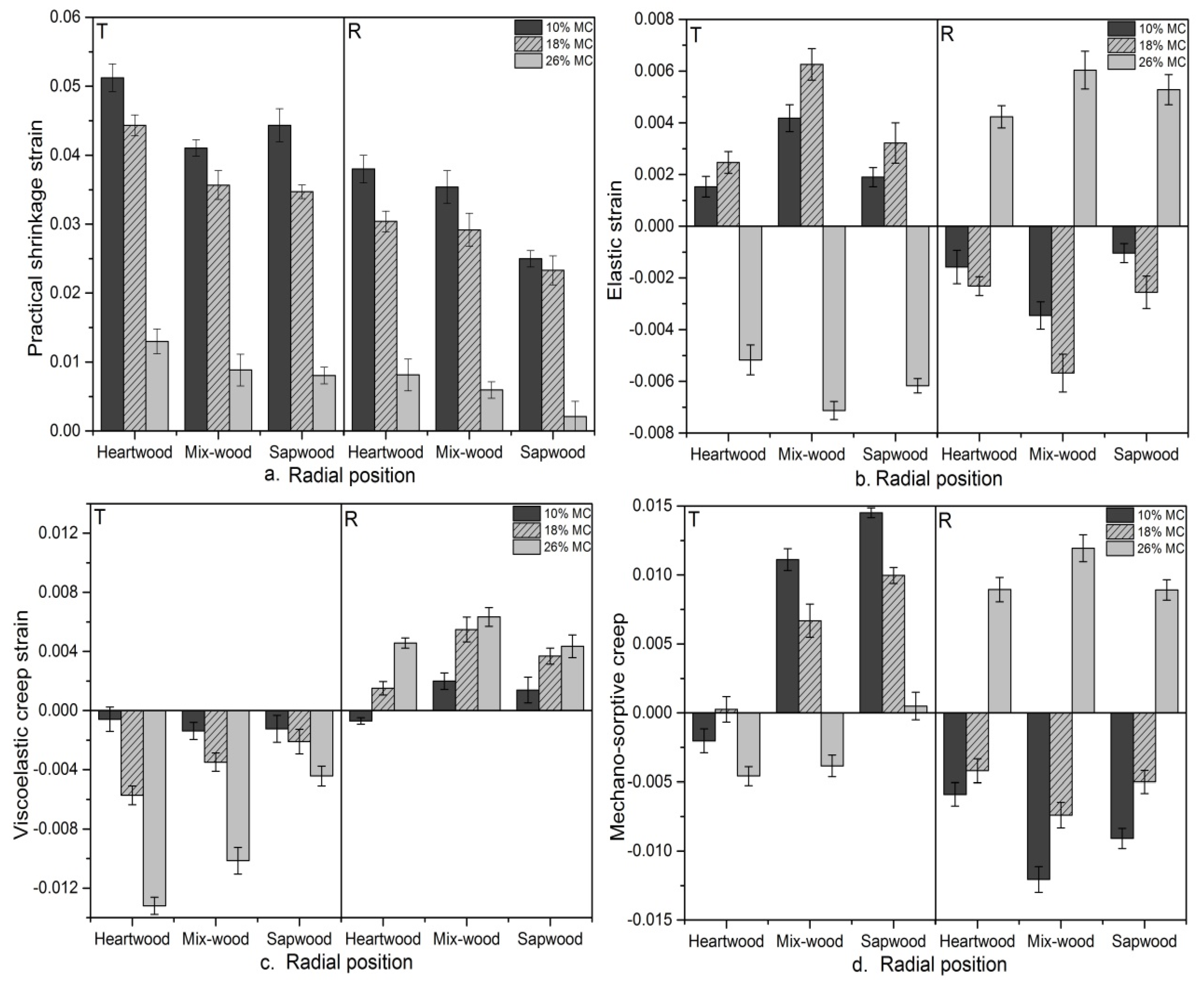