Persian walnut (Juglans regia L.), valued for both its nut and wood, is an ecologically important temperate tree species native to the mountainous regions of central Asia. Despite its importance, there are still few transcriptomic resources in public databases for J. regia, limiting gene discovery and breeding. Here, more than 49.9 million sequencing reads were generated using Illumina sequencing technology in the characterization of the transcriptome of four J. regia organs (bud, leaf, female flowers, and male flowers). De novo assembly yielded 117,229 unigenes with an N50 of 1955 bp. Based on sequence similarity searches against known proteins, a total of 20,413 (17.41%) genes were identified and annotated. A set of 27,584 unigenes with SSR (simple sequence repeats) motifs were identified as potential molecular markers, and a sample of 77 of these EST-SSRs (express sequence tags) were further evaluated to validate their amplification and assess their polymorphism. Next, we developed 39 polymorphic microsatellite markers to screen 88 Persian walnut individuals collected from 11 populations. These markers and transcriptomic resources will be useful for future studies of population genetic structure, evolutionary ecology, and breeding of Persian walnut and other Juglans species. View Full-Text
Keywords: microsatellites; transcriptome; next-generation sequencing; genetic diversity; English walnut microsatellites; transcriptome; next-generation sequencing; genetic diversity; English walnut
►▼ Show Figures 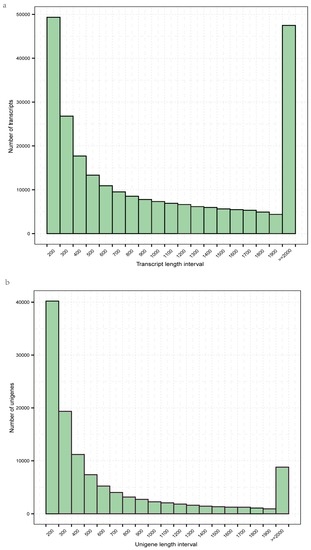