Repeated pruning of stock plants is a common approach to delaying maturation and maintaining the propagation ability of cuttings, but little is known about the hormonal or anatomical basis for this phenomenon. We tested the effect of two different stock-plant pruning heights (15 cm and 30 cm) on shoot production, rooting capacity and rooted cutting vigour of six clones of the eucalypt Corymbia torelliana × C. citriodora. We determined whether differences in rooting potential were related to indole-3-acetic (IAA) and abscisic acid (ABA) concentrations, or the degree of lignification or sclerification, of the cuttings. Maintaining stock plants at 15 cm height sometimes reduced the production of stem cuttings. However, it often increased the ensuing percentage of cuttings that formed roots, with mean rooting across all clones increasing from 30%–53%. Therefore, the number of rooted cuttings produced by short stock plants was similar to, or higher than, the number produced by tall stock plants. Cuttings from shorter stock plants had faster root elongation and occasionally greater root dry mass, shoot dry mass or shoot height than cuttings from tall stock plants. These differences in rooting potential were generally not related to differences in IAA or ABA concentrations of the cuttings or to differences in their stem anatomy. Pruning at the lower height was more effective in maintaining clonal juvenility, supporting previous findings that stock plant maturation is a limiting factor in clonal propagation of Corymbia torelliana × C. citriodora. View Full-Text
Keywords: adventitious roots; Eucalyptus; juvenility; plant hormones; propagation adventitious roots; Eucalyptus; juvenility; plant hormones; propagation
►▼ Show Figures 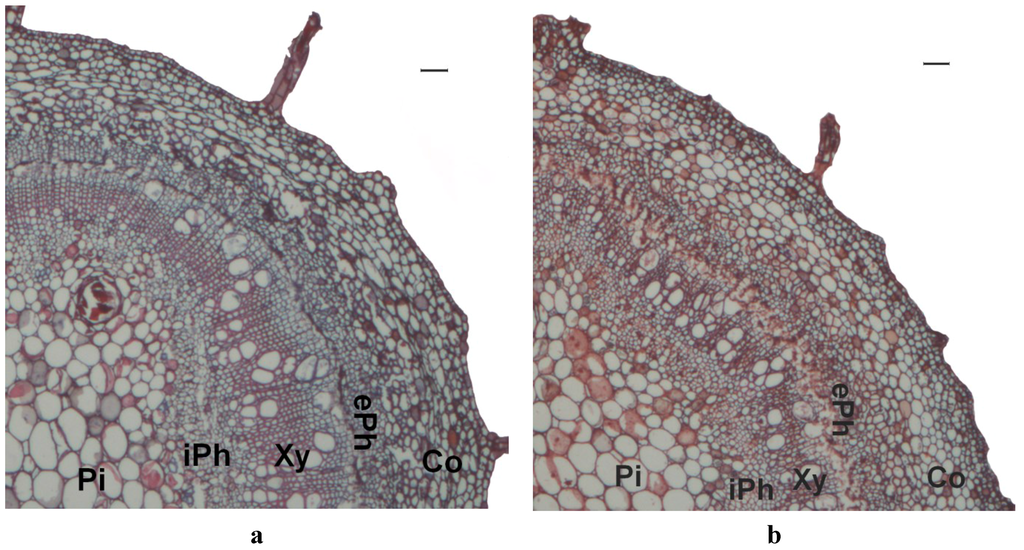