Capirona (Calycophyllum spruceanum Benth.) is a tree species of commercial importance widely distributed in South American forests that is traditionally used for its medicinal properties and wood quality. Studies on this tree species have been focused mainly on wood properties, propagation, and growth. However, genetic studies on capirona have been very limited to date. Currently, it is possible to explore genetic diversity and population structure in a fast and reliable manner by using molecular markers. We here used 10 random amplified polymorphic DNA (RAPD) markers to analyze the genetic diversity and population structure of 59 samples of capirona that were sampled from four provinces located in the eastern region of the Peruvian amazon. A total of 186 bands were manually scored, generating a 59 × 186 presence/absence matrix. A dendrogram was generated using the UPGMA clustering algorithm, and, similar to the principal coordinate analysis (PCoA), it showed four groups that correspond to the geographic origin of the capirona samples (LBS, Irazola, Masisea, Iñapari). Similarly, a discriminant analysis of principal components (DAPC) and STRUCTURE analysis confirmed that capirona is grouped into four clusters. However, we also noticed that a few samples were intermingled. Genetic diversity estimation was conducted considering the four groups (populations) identified by STRUCTURE software. AMOVA revealed the greatest variation within populations (71.56%) and indicated that variability among populations is 28.44%. Population divergence (Fst) between clusters 1 and 4 revealed the highest genetic difference (0.269), and the lowest Fst was observed between clusters 3 and 4 (0.123). RAPD markers were successful and effective. However, more studies are needed, employing other molecular tools. To the best of our knowledge, this is the first investigation employing molecular markers in capirona in Peru considering its natural distribution, and as such it is hoped that this helps to pave the way towards its genetic improvement and the urgent sustainable management of forests in Peru. View Full-Text
Keywords: amazon forest; capirona; genetic diversity; molecular markers; population structure amazon forest; capirona; genetic diversity; molecular markers; population structure
►▼ Show Figures 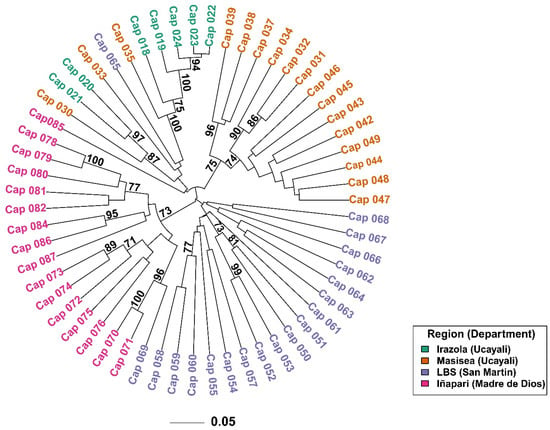