The horse chestnut leaf miner Cameraria ohridella (Lepidoptera: Gracillariidae) is an invasive pest of horse chestnut Aesculus hippocastanum (Sapindales: Sapindaceae) and has spread through Europe since 1985. Horse chestnut leaf blotch is a fungal disease caused by Guignardia aesculi (Botryosphaeriales: Botryosphaeriaceae) that also seriously damages horse chestnut trees in Europe. The interaction between the leaf miner and the fungus has not yet been sufficiently described. Therefore, the aim of the present study was to assess leaf damage inflicted to horse chestnut by both C. ohridella and G. aesculi during the vegetation season and to model their interaction. The damage to leaf area was measured monthly from May to September 2013 in České Budějovice, the Czech Republic using digital image analysis of sampled leaves. A simple phenomenological model describing the expected dynamics of the two species was developed. The study revealed that the damage caused by both the pests and the fungus varied significantly among sampling sites within the city. The overall leaf damage exceeded 50% in no-raking sites in August. The mathematical model indicates that infestation by C. ohridella is more affected by G. aesculi than vice versa. Guignardia aesculi is thus the superior competitor of the two species. Our findings highlight the delicate interplay between insect pests and fungal pathogens and the spatiotemporal dynamics influencing them, calling for more research in this understudied area. View Full-Text
Keywords: Aesculus hippocastanum; insect pest; fungal disease; invasive species; leaf damage; model; competition; urban environment Aesculus hippocastanum; insect pest; fungal disease; invasive species; leaf damage; model; competition; urban environment
►▼ Show Figures 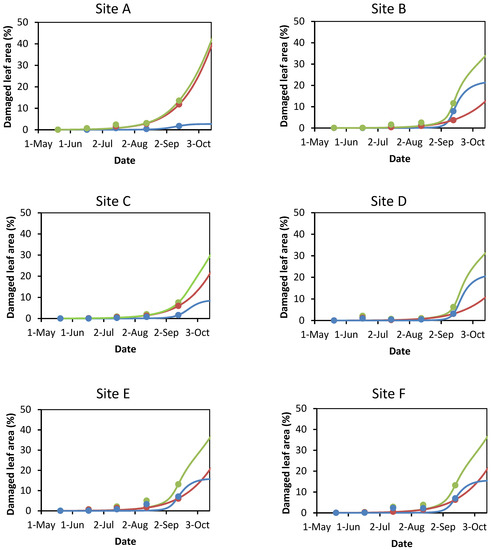