This study deals with the effect of heat treatment on Pinus oocarpa specimens from forest plantations in Colombia. The effects of two heat treatments at 170 and 190 °C for 2.5 h in saturated vapor were evaluated based on the color, dimensional stability, air-dry and basic densities, modulus of elasticity (MOE), and modulus of rupture (MOR) in static bending of samples. The evaluations were carried out following the Colombian Technical Standards NTC 290 and 663, and the color changes resulting from heat treatments were monitored using the CIE-Lab, as well as other standards from the literature. The results show that there was 2.4% and 3.3% mass loss of wood modified at 170 and 190 °C, respectively. The air-dry and basic densities were higher in 170 °C treatment than after 190 °C treatment, and the thermal modifications applied increased the dimensional stability of the treated wood. After treatment at 170 and 190 °C, the lightness to darkness (L*) was reduced by 10% and 22%; the a* coordinate increased by 11% and 26%, causing redness in the treated wood; the b* coordinate increased by 14% and 17%; and the values of the wood color saturation (c*) increased by 14% and 18%, respectively. The general color change (ΔE*) increased gradually with the increase in the treatment temperature, resulting in a high color change to a very different color. The bending strength of thermally modified wood was improved and significantly increased to values higher than those of unmodified Pinus oocarpa wood. The high air-dry and basic densities, improved dimensional stability and resistance to bending, and attractive appearance of the treated wood indicate that thermal modification is a promising alternative for the transformation of Pinus oocarpa wood into a raw material with a high added value. View Full-Text
Keywords: dimensional stability; heat treatment; mechanical properties; thermally modified wood dimensional stability; heat treatment; mechanical properties; thermally modified wood
►▼ Show Figures 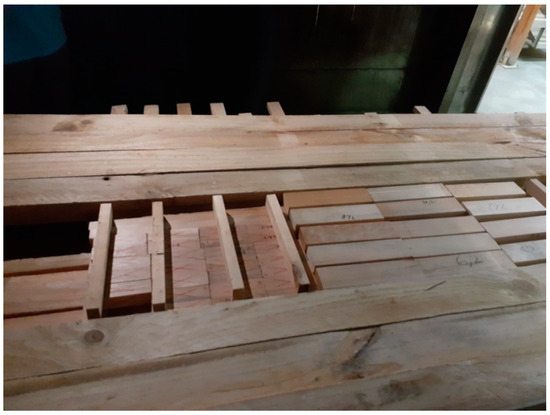