Impacts of Climate Change on Hydroclimatic Conditions of U.S. National Forests and Grasslands

The conterminous United States includes national forests and grasslands that provide ecological, social, economic, recreational, and aesthetic services. Future climate change can alter long-term hydroclimatic conditions of national forests and grasslands and lead to negative consequences. This study characterizes shifts in hydroclimatology and basin characteristics of US National Forests (NFs) and National Grasslands (NGs) in response to climate change over the 21st century under the DRY, MIDDLE, and WET climate models with the representative concentration pathway (RCP) 8.5 emission scenario. Climatic projections for three climate models ranging from the driest to wettest conditions were obtained from the Multivariate Adaptive Constructed Analogs (MACA) dataset. Then, the variable infiltration capacity (VIC) model was used to model hydrological responses of the selected future climates. Changes in regional hydroclimatic conditions of NFs and NGs were assessed by the magnitude and direction of movements in the Budyko space. The Fu’s equation was applied to estimate changes in basin characteristics. The results indicate that NFs and NGs are likely to experience larger changes in basin characteristics compared to the average of the United States. In general, across the conterminous US, the NFs in mountainous regions are likely to have larger changes in hydroclimatic variables than NFs with lower elevation and NGs. Comparing Forest Service regions, Pacific Northwest, Intermountain, and Northern regions may have a less arid climate with lower freshwater availability. The Southwestern, Northern, Intermountain, and Rocky Mountain regions are likely to experience higher shifts in their basin characteristics. This study can help environmental scientists, and land and water managers improve future land management plans. View Full-Text
Keywords: national forests; national grasslands; hydroclimatic conditions; climate change; budyko framework; VIC model national forests; national grasslands; hydroclimatic conditions; climate change; budyko framework; VIC model
►▼ Show Figures 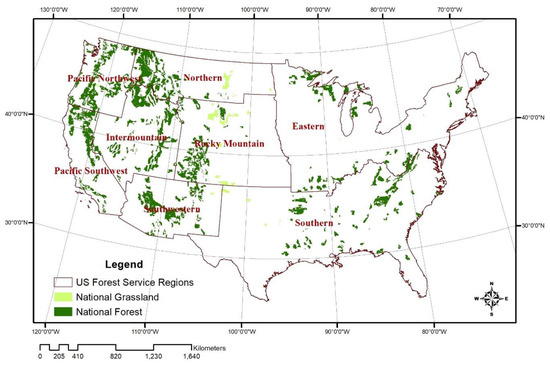