Multi-cohort forest management in northern hardwood stands may well be the best way to successfully regenerate tree species of intermediate shade tolerance, such as yellow birch (Betula alleghaniensis Britt.). The creation of large enough gaps in the canopy favors increased light availability within the opening, while soil scarification provides suitable germination seedbeds. Evidence of these methods’ success nonetheless remains mostly the purview of experimental studies rather than operational tests. In Quebec, Canada, the multi-cohort methods promoted include group selection cutting and patch cutting. The present study tested their implementation at an operational scale and over a large territory in both hardwood-dominated and mixedwood stands. We assessed their efficacy in promoting natural regeneration of commercial hardwood trees, notably yellow birch and sugar maple (Acer saccharum Marsh.). We conducted regeneration surveys at 2, 5, 10, and 15 years after harvest. Overall, group selection and patch cuttings were successful in regenerating the target species. Yellow birch, for instance, showed a mean stocking around 60% and a mean sapling density around 3400 stems ha−1 after 15 years. We compared several variables for measuring regeneration in early years, and found that the relative abundance, the stocking based on one stem per sampling unit, and the mean maximum height were good predictors of the relative presence of yellow birch and sugar maple in 15-year-old canopy openings. Using smaller sampling units (6.25 m2 rather than 25 m2) and waiting until year 5 may be more useful for making such predictions. In addition, there was an important turnover in vertical dominance in these openings. Non-commercial woody competitors were frequently dominant in early years but were often replaced by commercial hardwoods, notably yellow birch. We propose certain thresholds for assessing the success of post-harvest regeneration and for evaluating the need for a cleaning treatment. View Full-Text
Keywords: stocking; forest regeneration; group selection cutting; patch cutting; northern hardwood; yellow birch stocking; forest regeneration; group selection cutting; patch cutting; northern hardwood; yellow birch
►▼ Show Figures 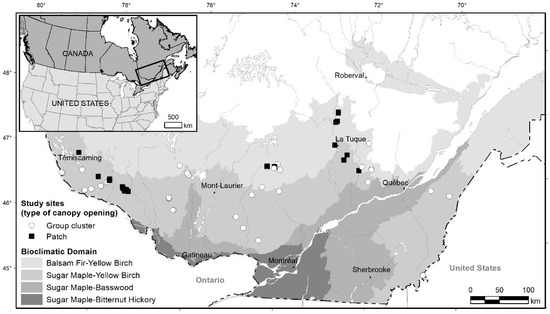