Both altitude and vegetation are known to affect the amount and quality of soil organic matter (SOM) and the size and activity of soil microbial biomass. However, when altitude and vegetation changes are combined, it is still unclear which one has a greater effect on soil chemical and biochemical properties. With the aim of clarifying this, we tested the effect of altitude (and hence temperature) and vegetation (broadleaf vs pine forests) on soil organic carbon (SOC) and soil microbial biomass and its activity. Soil sampling was carried out in two adjacent toposequences ranging from 500 to 1000 m a.s.l. on a calcareous massif in central Italy: one covered only by Pinus nigra J.F. Arnold forests, while the other covered by Quercus pubescens Willd., Ostrya carpinifolia Scop. and Fagus sylvatica L. forests, at 500, 700 and 1000 m a.s.l., respectively. The content of SOC and water-extractable organic carbon (WEOC) increased with altitude for the pine forests, while for the broadleaf forests no trend along the slope occurred, and the highest SOC and WEOC contents were observed in the soil at 700 m under the Ostrya carpinifolia forest. With regard to the soil microbial community, although the size of the soil microbial biomass (Cmic) generally followed the SOC contents along the slope, both broadleaf and pine forest soils showed similar diminishing trends with altitude of soil respiration (ΣCO2-C), and ΣCO2-C:WEOC and ΣCO2-C:Cmic ratios. The results pointed out that, although under the pine forests’ altitude was effective in affecting WEOC and SOC contents, in the soils along the broadleaf forest toposequence this effect was absent, indicating a greater impact of vegetation than temperature on SOC amount and pool distribution. Conversely, the similar trend with altitude of the microbial activity indexes would indicate temperature to be crucial for the activity of the soil microbial community. View Full-Text
Keywords: forest soil; soil organic carbon; water extractable organic carbon; soil microbial activity; toposequence forest soil; soil organic carbon; water extractable organic carbon; soil microbial activity; toposequence
►▼ Show Figures 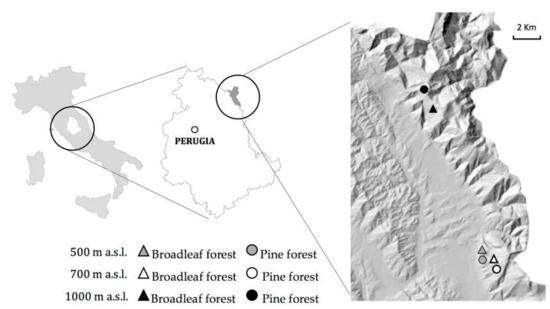