The aim of the study was to investigate the effect of soil recovery after a landslide on the nutritional status of a young generation of Silver fir (Abies alba Mill.) and Silver birch (Betula pendula Roth.) trees. The study was carried out on the site of a landslide that took place in 2010 in the Gorlice Forest District (Southern Poland). Basic soil properties, macro, and microelements content and enzymatic activity were determined in the soil samples that were collected from across the landslide area, from locations distributed by a grid 10 × 10 m (18 points). Plant material samples, collected to indicate nutritional status, were also taken from each point. Results demonstrate that the nutritional status of emerging regeneration depends on soil acidification and soil organic matter content. The pH of the soils on the landslide determines the intensity of nutrient uptake by the young seedlings. The nutrition of young trees varied across the landslide zone, differing in terms of the soil’s organic matter content and its chemical properties. In comparison to the depletion zone, the accumulation zone proved to be substantially richer in soil organic matter, resulting in higher soil biochemical activity. The study demonstrates that Silver birch (Betula pendula Roth.) is improving nutrient cycling in areas disturbed by landslide. View Full-Text
Keywords: enzyme activity; forest ecosystem; silver fir; silver birch; soil organic matter enzyme activity; forest ecosystem; silver fir; silver birch; soil organic matter
►▼ Show Figures 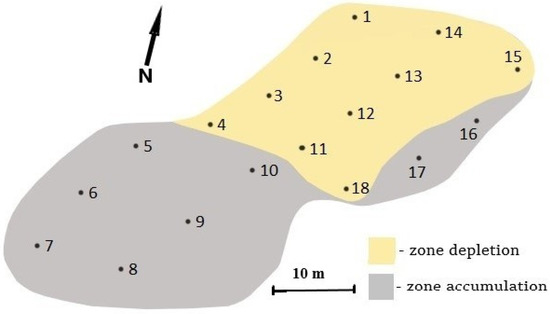