This study was carried out to clarify the vegetation decline due to air pollutants emitted in the process of industrial activities and the passive restoration of the vegetation due to socioeconomic changes after economic growth. To achieve this goal, we investigated the spatial distribution of vegetation, differences in species composition and diversity among vegetation types different in damage degree, vegetation dynamics, the age structure and annual ring growth of two dominant plant species, and the landscape change that occurred in this area over the last 50 years. Plant communities tended to be spatially distributed in the order of grassland, shrubland (dominated by Styrax japonicus Siebold and Zucc. community), and forests (dominated by Pinus thunbergii Parl. and Pinus densiflora Siebold and Zucc. communities), with increasing distance from the pollution source. The result of stand ordination based on vegetation data reflected the trend of such a spatial distribution. Species richness evaluated based on the species rank dominance curve was the highest in shrubland and the lowest in grassland; species richness in forests was intermediate. The size class distribution of woody plant species in four plant communities composing three vegetation types showed the possibility of them being replaced by forest in the late successional stage. However, the density of successor trees was relatively low, whereas the density of shrubby plants, which are resilient to air pollution, was very high. The age class distribution of a dominant species forming shrubland and pine forest showed that most of them were recruited after industrialization in this area. The period when young individuals in both vegetation types were recruited corresponded to the period when the annual ring growth of the pine trees that survived air pollution was reduced. An analysis of the landscape change in this area indicated that coniferous forest and agricultural field decreased greatly, whereas industrial area, residential area, mixed forest, and broadleaved forest showed increasing trends since construction of the industrial complex. As a result, the decrease in coniferous forest is usually due to vegetation decline and partially to succession, as the pine trees dominating the forest are not only sensitive to air pollution but are also shade-intolerant. The increase in mixed and broadleaved forests reflects vegetation decline or succession. Vegetation decline progressed for about 30 years after the construction of the industrial complex; it has begun to be restored passively since then, although the change has been slow. These results are in line with the environmental Kuznets curve hypothesis that environmental degradation increases in the early stages of economic growth to a certain point, and, after a turning point, economic development leads to environmental improvements—thus, there is an inverted U-shaped relationship between economic growth and environmental degradation. View Full-Text
Keywords: air pollution; industrial complex; Korea; passive restoration; vegetation damage air pollution; industrial complex; Korea; passive restoration; vegetation damage
►▼ Show Figures 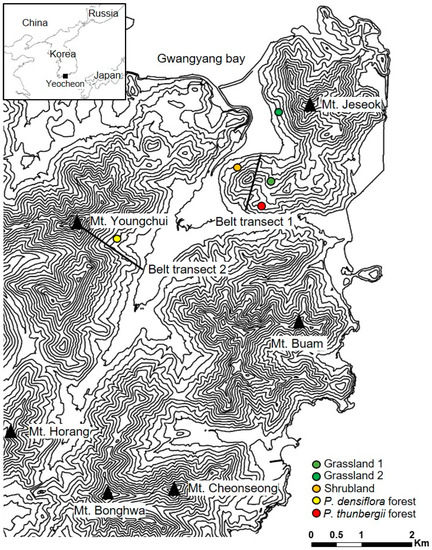