When performing hydrologic calculations, the actual amount of rain precipitation falling under the tree canopies of the taiga zone is one of the most important factors in forming and estimating rainfall runoff. This is due to the fact that only a portion of rainfall reaching the soil through the forest canopy takes part in forming river runoff. At present, there is no unanimity on methods of estimating rainfall retention by the canopies of different tree species in various natural geographical zones. The existing estimation methods rely on empirical observations of net and gross rainfall rather than on the results of physical modeling of moisture on leaf surfaces in droplet form. The disadvantages of the existing methods mean that it is not possible to make a spatial estimation of rainfall captured by canopies. The purpose of this study was to map the maximum rainfall interception capacity for a small forest watershed. The authors were able to solve the following problems: (1) In situ modeling of specific water retention in droplet form on leaf surfaces of tree species of the experimental watershed in the middle taiga subzone was carried out and the specific water retention per unit leaf area was determined. Such experiments have never been conducted previously. (2) Indirect methods of estimating the leaf surface area of tree plants depending on the amount of phytomass, age and height of tree stands were developed. (3) Mapping of tree stand characteristics (such as species composition, height, canopy cover) were performed, and together with the specific rainfall interception capacity, which was determined during experiments, provided the basis for a map of maximum rainfall retention capacity by canopies, i.e., a spatial image of irrecoverable rainfall losses was obtained. Rainfall is retained on a canopy in droplet form (droplet size varies from 10.6 to 18.6 mg). Specific water retention (mass per unit leaf surface area) is determined by the leaf (needle) roughness. The overall droplet retention on canopies is determined by leaf surface area and precipitation intensity. The maximum mass of the rainfall retained on the canopies of individual deciduous trees reaches 77 kg, (3.0–4.0 mm per canopy projection area) and that of coniferous trees ranges from 24.8 to 58.0 kg (1.9 to 5.9 mm). Understanding rainfall loss values in hydrology is of key importance in distributed models of rainfall flooding. Taking into account rainfall losses due to canopy interception makes it possible to reduce the margin of error in calculations of maximum rainfall flood loss from 126% to 25%. View Full-Text
Keywords: forest hydrology; mapping; GIS-technologies; forest science; rainfall floods; modeling; canopy rainfall interception forest hydrology; mapping; GIS-technologies; forest science; rainfall floods; modeling; canopy rainfall interception
►▼ Show Figures 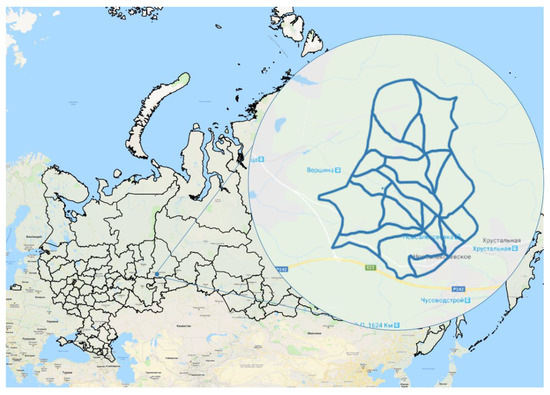