Bioeconomy in the National Forest Strategy: A Comparison Study in Germany and the Czech Republic
Next Article in Special Issue

Diplodia fraxini and Diplodia subglobosa: The Main Species Associated with Cankers and Dieback of Fraxinus excelsior in North-Eastern Italy
Previous Article in Journal

Large-scale ash (Fraxinus spp.) dieback caused by the fungus Hymenoscyphus fraxineus has been a major concern throughout Europe for more than two decades. Most of the related research has been focused on Fraxinus excelsior L., and there is still little information on fungal involvement in the dieback of Fraxinus angustifolia Vahl, especially in roots and stem bases, which play an important role in decline progress and tree stability. The objectives of this study were to identify fungi present in visually healthy and symptomatic wood tissues in basal parts of narrow-leaved ash trees in different decline phases, in order to determine the possible role of these fungi and their importance in the dieback process. The stem bases and roots of 90 trees in three different health categories, determined based on crown defoliation, were sampled in natural stands affected by ash dieback. Isolated fungal cultures were identified based on the rDNA ITS (Internal transcribed spacer) region and their association with tree health status was analyzed. In total, 68 different fungal taxa were confirmed, including Hymenoscyphus fraxineus and Armillaria spp., which were mainly present in roots, although overall in lower frequencies than on common ash in other studies. Most frequently isolated fungal taxa, which encompassed 51% of all obtained isolates, were Trichoderma spp., Ilyonectria robusta, Fusarium solani, Cladosporium cladosporioides, and Diaporthe cotoneastri. Their associations with tree health categories and presence in both symptomatic and visually healthy wood indicate that they act as opportunistic pathogens and early colonizers of weakened ash tissues. Research also revealed that, although the extent of crown defoliation and presence of root and stem necroses were associated, basal symptoms occurred on a number of trees with healthy looking crowns, meaning they can develop independently. View Full-Text
Keywords: ash dieback; Hymenoscyphus fraxineus; Armillaria spp.; opportunistic fungi ash dieback; Hymenoscyphus fraxineus; Armillaria spp.; opportunistic fungi
►▼ Show Figures 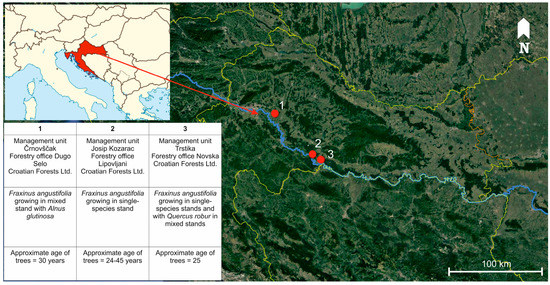