The Spread and Role of the Invasive Alien Tree Quercus rubra (L.) in Novel Forest Ecosystems in Central Europe

Research Highlights: The factors that control the spread and regeneration of Quercus rubra (L.) and the functional diversity of invaded forest were studied in order to indicate the significant role of disturbances in a forest and the low functional richness and evenness of sites that are occupied by red oak. Background and Objectives: Red oak is one of the most frequent invasive trees from North America in Central Europe. It is also one of the most efficient self-regenerating invasive alien species in forests. The main goal of the study is to identify the characteristics of forest communities with a contribution of Q. rubra, and to assess its role in shaping the species diversity of these novel phytocoenoses. Materials and Methods: A total of 180 phytosociological records that have a share of Q. rubra in southern Poland were collected, including 100 randomly chosen plots from which soil samples were taken. In addition, vegetation sampling was performed in 55 plots in the vicinities that were uninvaded. Results: The probability of the self-regeneration and cover of Q. rubra seedlings depends mainly on the availability of maternal trees, and the abundance of seedlings was highest in cutting areas. The vegetation with Q. rubra differed in the plant functional types and environmental factors. According to the three-table ordination method, while the cover of red oak only affected the canopy of the remaining species, a comparison of the invaded and uninvaded plots demonstrated that the sites that were occupied by Q. rubra had lower values of functional richness and evenness, thus indicating higher habitat filtering and a lower importance of competition. Conclusions: Forest management practices play the most crucial role in the self-regeneration and occurrence of Q. rubra. However, the role of red oak in shaping the species composition and functional diversity is rather low. View Full-Text
Keywords: afforestation; cultivation; forest management; invasion; Northern red oak afforestation; cultivation; forest management; invasion; Northern red oak
►▼ Show Figures 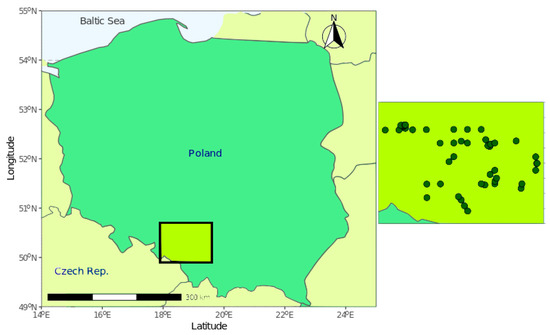