Uneven-aged silvicultural approaches are increasingly utilized as efficient management strategies for economic and ecological sustainability of forest resources, including in the southeastern United States where there is interest in converting intensively managed pine plantations to uneven-aged stands. However, success of stand conversion and perpetuation of an uneven-aged forest stand depends on obtaining adequate regeneration of the desired species and its ability to develop into merchantable size classes. In fire-maintained ecosystems, regeneration dynamics can be challenging for species such as slash pine that are not tolerant of fire in the seedling stage. In this study, we examined the survival of slash pine (Pinus elliottii Englm.) regeneration (seedlings and saplings) following prescribed burns in (1) a harvest-created gap (0.4 ha; 70 m diameter) and (2) a mature stand with abundant advanced regeneration at two mesic-hydric flatwoods sites in northwest Florida, USA. We characterized the prescribed burns at the two sites and quantified survival of regeneration of different size classes (<1 m, 1–2 m, 2–3 m, >3 m) at 10 months after the burn. Within the gap, the greatest survival of regeneration was observed at the center (12.5% survival) in comparison to the other positions in the gap (1.92% to 7.14% survival), with all seedlings <3m height killed by the burn. In the stand with advance regeneration, survival ranged between 0% and 50% at different positions, with all regeneration smaller than 2 m killed by fire. Overall, we observed 6.36% and 23.2% survival in the harvest-created gap and the stand with advance regeneration, respectively. Despite these low percent survival values, post-burn slash pine regeneration (seedlings/saplings) density equaled 725 and 4800 per hectare, respectively. Our modeling projections suggest that this level of post-burn regeneration density may be adequate for stand conversion and sustainable uneven-aged silvicultural management of slash pine. These results suggest that seedling size is the preeminent control on slash pine survival after prescribed burn. However, long-term monitoring of stand dynamics following future prescribed burns and cutting cycle harvests will help confirm if slash pine can be sustainably managed using uneven-aged silviculture. View Full-Text
Keywords: southern pine; stand conversion; uneven-aged silviculture; group selection; regeneration; forest restoration; forest structure southern pine; stand conversion; uneven-aged silviculture; group selection; regeneration; forest restoration; forest structure
►▼ Show Figures 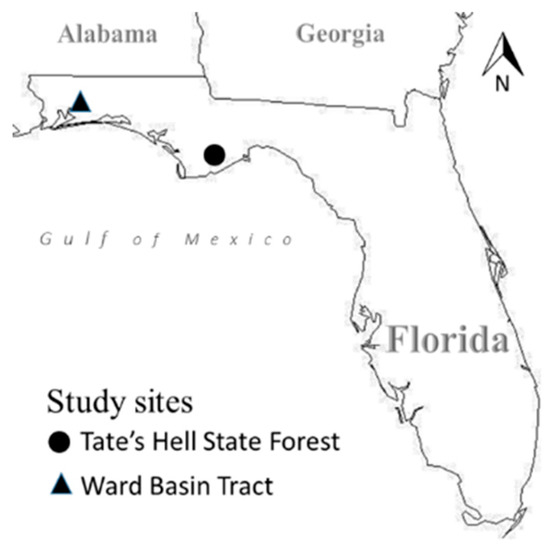