Community assembly has been one of the central topics in plant community ecology for decades. There are two main theories to explain the process of assembly. Niche-based theory predicts that assembly of plant communities is mostly a deterministic process and that the patterns of species coexistence may be affected by environmental filtering (referring to abiotic factors that prevent the establishment or persistence of species at a particular location) or competitive exclusion (referring to interaction of species within community) [1,2]. Alternatively, neutral theory suggests that stochastic processes act on assembly [3] and the structure and composition of a community are mainly constrained by probabilistic dispersal, ecological drift, or historical inertia [4]. Although several researchers have considered that both neutral and deterministic processes may shape community assembly patterns [5,6,7], the deterministic process was regarded as a main process during assembly [8], particularly in temperate regions [9].
Limiting similarity and environmental filtering are two contrary niche-based mechanisms that occur simultaneously along various environmental axes during deterministic assembly, even within a single community, that influence community structure [1,2,10]. In general, limiting similarity is expected to exclude similar coexisting species, whereas environmental filtering tends to select similar species from coexisting species [11].
Since environment, succession, and evolutionary history may influence the assembly process, phylogeny has been used as a proxy to explore evolutionary history because of its close relationship to species taxonomy and differentiation [12,13,14]. Phylogeny is a reflection of species evolutionary history on structure of the community [15,16], and it can help reveal the multitude of processes driving community assembly in various habitats [17]. For instance, abiotic and biotic filters can lead to phylogenetic clustering by constraining species establishment via selection on their phylogenetic patterns [18], whereas limiting similarity would lead to phylogenetic overdispersion. Shortly after the first studies on community phylogenetic structure [15,19], Cavender-Bares et al. [20] explained that the interpretation of community phylogenetic patterns were strongly dependent on the presence or absence of phylogenetic niche conservatism. According to this assumption, community structure based on phylogeny provides a powerful tool to explore the relative importance of community assembly processes [5,6,7,21].
Quantification of communities with alpha and beta diversity provides information on the biodiversity pattern [22,23]. Also, an alternative insight on biodiversity such as phylogenetic diversity can substantially improve our understanding of the mechanisms of biodiversity [15,24,25,26]. Thus, the comparison of changes in plant and phylogenetic diversity among species within communities is an effective way to determine which processes drive community assembly.
Here, we hypothesize that in the drier and harsher conditions on the Loess Plateau, the species co-occurring within the Quercus wutaishanica forest will be more phylogenetically related than those co-occurring within the Q. wutaishanica forest in the wetter and milder conditions of the Qinling Mountains. Because of climate differences between the Qinling Mountains (temperate and moist) and the Loess Plateau (warm and semi-arid), the two Q. wutaishanica forest communities differ significantly in species composition and regional species pools [27]. For example, only about 4.6% of the species are found in both two types of Q. wutaishanica forests [28]. Therefore, although the two types of climax forest communities share the same dominant species, they may have a different evolutionary history. Thus, these communities could provide suitable study systems to test the phylogenetic niche conservatism hypothesis [29]. In the present study, we assess the phylogenetic structure and phylogenetic diversity between the two types of Q. wutaishanica forest in the Qinling Mountains and on the Loess Plateau. Our primary aims were to: (1) compare the variation in community assembly of the two distinct Q. wutaishanica forest communities and analyze how these variations are formed; and (2) test whether the deterministic process is the main process during assembly in the temperate region and if an adverse climate may result in increased clustering of phylogenetic structure.

The vegetation was surveyed in July 2014. Twenty plots (10 × 10 m) in typical Q. wutaishanica forests were established at 1100 m in Ziwuling region while 20 plots (10 × 10 m) were established at 2000 m in Niubeiliang Nature Reserve. For each region, we established transects along the contour line (1100 m in the Ziwuling region and 2000 m in the Niubeiliang Nature Reserve). The plots were set along the transect, and the distance between plots was 50 m. Location of each plot were recorded. Three replications of soil samples from each plot were obtained along the diagonal line of plots. The soil samples were taken from the layer 10–20 cm below the soil surface, since characters of this soil layer were relatively consistent. The soil samples were weighed for soil fresh weight and then air-dried and weighed again for soil dry weight. Soil water content (SWC), soil pH, ammonia nitrogen (AN), nitrate nitrogen (NN), and rapidly available phosphorus (RAP) were measured. Soil pH was measured using an acidometer (PB-100, Sartorius Inc., Göttingen, Germany), and AN, NN, and RAP were measured using a chemical analyzer (Cleverchem 200+, DeChem-Tech GmbH, Hamburg, Germany) and a spectrophotometric method. We documented these environmental factors at the same time for each region. Only woody plants (trees and shrubs) were included in vegetation sampling. All woody species (for tree species, diameter at breast height (DBH) > 10 cm; for shrub species, basal diameter > 1 cm) were identified within each plot and their abundance, coverage, and height were measured.

Prior to phylogenetic analysis, a super phylogenetic tree was constructed. Although the distance between the two regions is only about 200 km, there is a very large difference in species composition between the Niubeiliang Nature Reserve and the Ziwuling region [28]. In other words, the Q. wutaishanica forests in the two places are not likely to share a common species pool. According to studies in the Ziwuling region and the Niubeiliang Nature Reserve [31,32], we established the species pools by lists of the species present in Q. wutaishanica forests in the Qinling Mountains and on the Loess Plateau. Two phylogenetic trees were constructed for the two areas of Q. wutaishanica forests plots using the informatics tool Phylomatic [33] (available at http://www.phylodiversity.net). Phylomatic utilizes the Angiosperm Phylogeny Group III consensus tree (R20120829) as a backbone to add species from the regional pool based on their taxonomy. We used the BLADJ (a built-in branch length calculation algorithm in Phylocom) algorithm to add the evolutionary branch length based on the node date estimated by Wikström et al. [34]. The BLADJ algorithm was run using the Phylocom 3.0 program (designed by Webb, Ackerly & Kembel) [35].

We calculated the net relatedness index (NRI) and nearest taxon index (NTI) to quantify the phylogenetic relatedness among species in each plot [19]. NRI indicates the standardized effect size of the mean phylogenetic distance (MPD). The NTI indicates the mean nearest phylogenetic neighbor among the individual species (mean nearest phylogenetic taxon distance, MNTD) in a community. Random communities as null model were constructed by drawing species from the super species pool for both areas [36]. The species pool used in these randomizations included all the species occurring in the study region. NRI and NTI are defined as follows: where MNTD/MPDobserved is the observed MNTD/MPD, MNTD/MPDrandomized is the expected MNTD/MPD of the randomized assemblages (n = 999), and sdMNTD/MPDrandomized is the standard deviation of the MNTD/MPD for the randomized assemblages. A positive NTI/NRI value indicates that MNTD/MPD is lower than that expected by chance and that phylogenetic clustering of species occurs, and that the assembly process is dominated by limiting similarity. Conversely, a negative NTI/NRI value indicates phylogenetic overdispersion (Webb 2000), and suggests limited similarity. These metrics were estimated with the COMSTRUCT algorithm implemented in Phylocom 3.0 [35]. For the analysis of differences in phylogenetic structures (NRI/NTI), an ANOVA was run.

PD of Q. wutaishanica forests was significantly higher in the Qinling Mountains than in the Loess Plateau (Figure 3). On the other hand, like the patterns of NTI and NRI, the range of PD change in the Qinling Mountains was wider than those on the Loess Plateau. Note that PD is significantly related to species richness. The number of species in each region was significantly different (Table 1).
We analyzed phylogenetic beta diversity changes in each region along AN, SWC, NN, soil pH, and RAP gradients. In the current study, the distance between the plots within the same site was very close (the maximum distance was 500 m). Thus, we did not discuss the relationship between beta phylogenetic diversity and distance between plots in this paper. For beta diversity based on AN, the linear regression lines of beta diversity showed different patterns in the two regions (Figure 4a). For SWC, the slope linear regression lines differ significantly (but no significance in QL, Figure 4b), and for NN, the linear regression lines exhibited similar patterns but they do not overlapped (Figure 4c). However, phylogenetic beta diversity exhibited different patterns within the two regions based on pH and RAP. There was an increasing tendency for beta diversity along the pH and RAP differentiation gradient in the Qinling Mountains, while there was no linear relationship between beta diversity and pH or RAP in the Loess Plateau (Figure 4d,e).

The following are available online at https://www.mdpi.com/1999-4907/11/1/43/s1, Table S1: Species in the Qinling Mountains and the Loess Plateau. Bold words means species overlap in both regions.

M.W. conducted the experiment and wrote the paper. J.X. analyzed the data. Y.C. prepared tables and figures. Y.G. participated in field experiment. X.L. helped identifying the plant species. M.Y. designed the study. All authors have read and agreed to the published version of the manuscript. 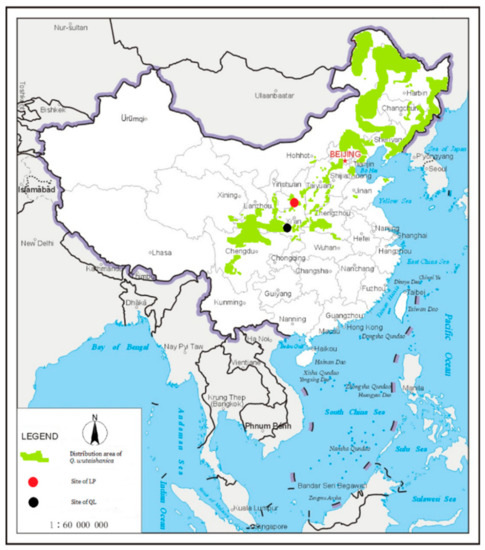 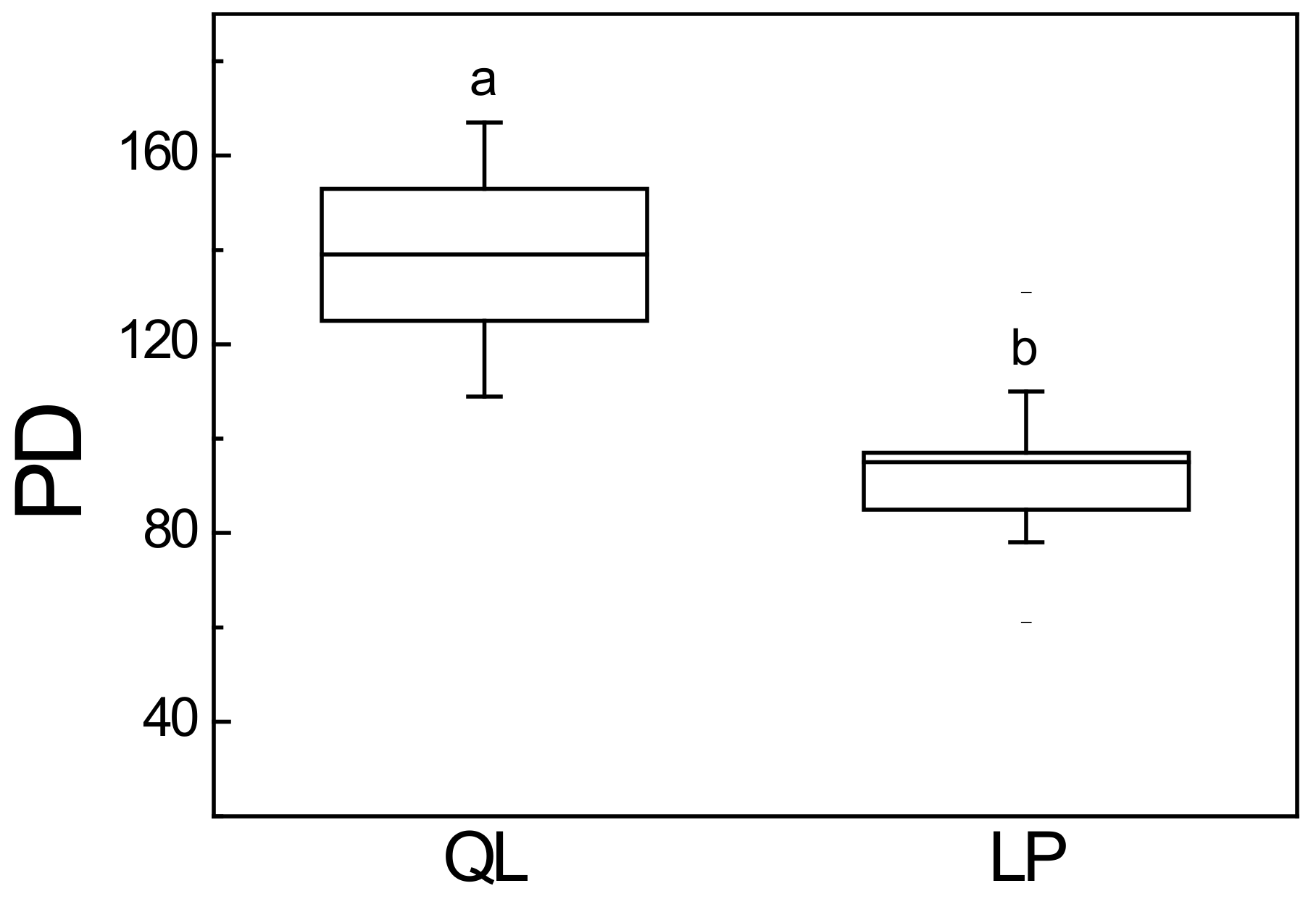 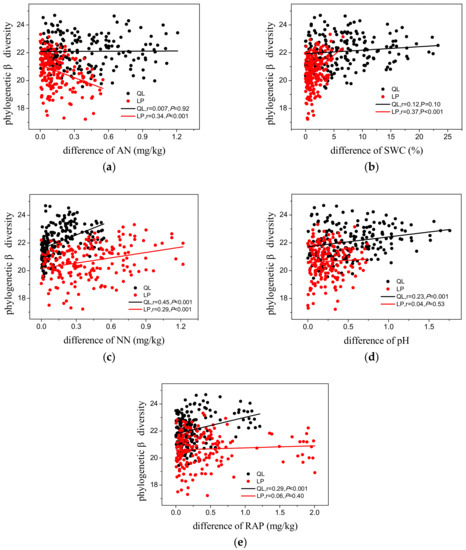 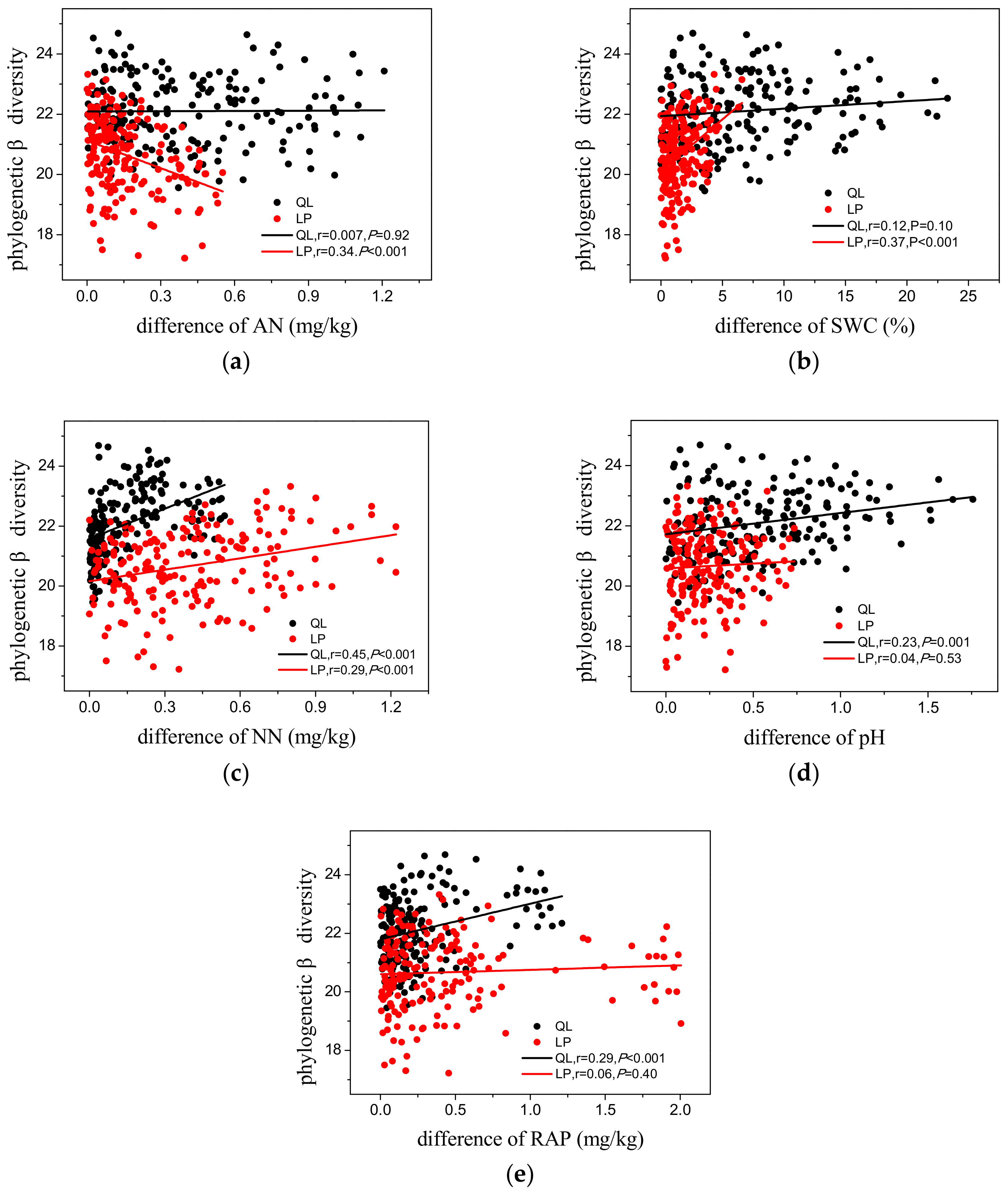