Monitoring of a Seedling Planting Restoration in a Permanent Preservation Area of the Southeast Atlantic Forest Biome, Brazil

The Atlantic Forest biome is a biodiversity hotspot with only 13% of its native vegetation cover remaining in Brazil. Forest restoration is an important process for the re-establishment of biodiversity and the preservation of water resources in degraded areas, like riparian forests. Monitoring is an essential step of restoration, because the periodic evaluation of indicators allows researchers to analyze the effectiveness of applied techniques. This study aimed to evaluate the environmental quality of a seedling planting (active restoration) in a Permanent Preservation Area (PPA) of the Southeast Atlantic Forest biome, through a monitoring protocol, within a year. More specifically, we aimed to investigate the following questions: (1) do some ecological groups or families grow more than others? and (2) is the cover of exotic grasses negatively influencing forest regeneration? Data were collected during November 2017 and April (interval represents five months of wet season) and October 2018 (six months of dry season). Eight plots of 9 × 18 m were established and all individuals were identified and measured (diameter at ground level (DGL), height (H), and canopy diameter (CD)). Exotic grass cover and richness of regenerating species were also recorded. We registered 119 individuals during the three inventories, distributed in 35 species and 14 families. Results indicate an inverse association between exotic grasses and the presence of recruits in the area. Thus, exotic grass control may be needed while the forest canopy is not closed. A significant growth of individuals in the whole study period, especially during the wet season, was detected. Legumes grew more in trunk and canopy diameter (Anadenanthera colubrina (Vell.) Brenan and Inga vera Willd. subsp. affinis (DC.) T. D. Penn. had the biggest growth, respectively) than non-legumes during wetter months and within a year. Pioneers had greater height increase compared to non-pioneers only during wetter months. Legumes may be important species to be used in other young tropical forest restoration areas. View Full-Text
Keywords: atlantic forest; restoration plantation; native species; woody species atlantic forest; restoration plantation; native species; woody species
►▼ Show Figures 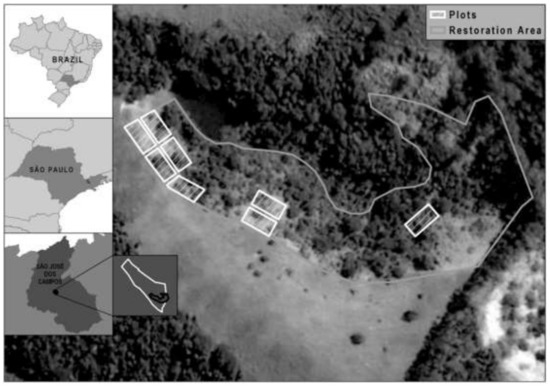