Management of spruce budworm, Choristoneura fumiferana (Clem.), outbreak spread requires understanding the demographic processes occurring in low, but rising populations. For the first time, detailed observations were made in the early stages of outbreak development. We sampled populations over a three-year period in both treated and untreated populations in the Lower St-Lawrence region of Quebec, Canada, and measured the density-dependence of survival and population growth rates, and the impact of natural enemies and insecticides. Insecticides tested were Bacillus thuringiensis (Berliner 1915) and tebufenozide. We recorded strong density-dependence of survival between early larval stages and adult emergence, explained largely by the variation of natural enemy impacts and overcrowding. We also observed inverse density-dependence of apparent fecundity: net immigration into lower-density populations and net emigration from the higher, linked to a threshold of ~25% defoliation. Because of high migration rates, none of the 2013 treatments reduced egg populations at the end of summer. However lower migration activity in 2014 allowed population growth to be reduced in treated plots. This evidence lends support to the conclusion that, for a budworm population to increase to outbreak density, it must be elevated via external perturbations, such as immigration, above a threshold density of ~4 larvae per branch tip (L4). Once a population has increased beyond this threshold, it can continue growing and itself become a source of further spread by moth migration. These findings imply that populations can be brought down by insecticide applications to a density where mortality from natural enemies can keep the reduced population in check, barring subsequent immigration. While we recognize that other factors may occasionally cause a population to exceed the Allee threshold and reach outbreak level, the preponderance of immigration implies that if all potential sources of significant numbers of moths are reduced on a regional scale by insecticide applications, a widespread outbreak can be prevented, stopped or slowed down by reducing the supply of migrating moths. View Full-Text
Keywords: spruce budworm; Choristoneura fumiferana; forest protection; early intervention strategy; survival; apparent fecundity; immigration; growth rate; treatment threshold; insecticides spruce budworm; Choristoneura fumiferana; forest protection; early intervention strategy; survival; apparent fecundity; immigration; growth rate; treatment threshold; insecticides
►▼ Show Figures 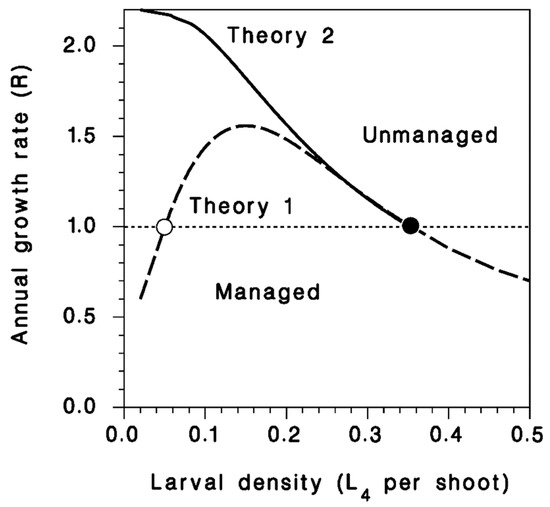