Simple Is Best: Pine Twigs Are Better Than Artificial Lures for Trapping of Pine Weevils in Pitfall Traps

The large pine weevil Hylobius abietis (Linnaeus 1758) is the main pest of coniferous seedlings in Europe and causes substantial damage in areas that have been clear-cut or otherwise disturbed. We compared the efficacy of different attractants for the capture of H. abietis adults in white pitfall traps. The field experiment was performed from mid-April to the end of August 2018 at six plots in Central Europe located in spruce stands that had been clear-cut. At each plot, we compared five attractants: one pine twig with ethanol, Hylodor, alpha-pinene + ethanol, turpentine oil and ethanol (separated), and turpentine oil + ethanol (not separated). Traps without attractant served as a control. Six traps for each attractant or control were distributed at each plot. Of the total number of H. abietis adults trapped, 43.3%, 20.5%, 17.9%, 9.8%, 8.5% and 0.5% were captured in traps with pine twigs with ethanol, alpha-pinene, Hylodor, turpentine, oil + ethanol (separated), turpentine oil + ethanol (combined), and no attractant, respectively. The bottom of each trap contained propylene glycol to kill and preserve beetles. The small number of beetles captured in the control traps confirms that the propylene glycol:water mixture did not influence the trapping of H. abietis. The use of pitfall traps with a suitable attractant (especially pine twigs and ethanol) should be useful for monitoring of H. abietis, because it is simple and cost-effective. The use of such pitfall traps to control H. abietis by mass trapping would require 50 to 100 traps per ha. View Full-Text
Keywords: Hylodor; alpha-pinene; turpentine oil; ethanol; propylene-glycol; Norway spruce Hylodor; alpha-pinene; turpentine oil; ethanol; propylene-glycol; Norway spruce
►▼ Show Figures 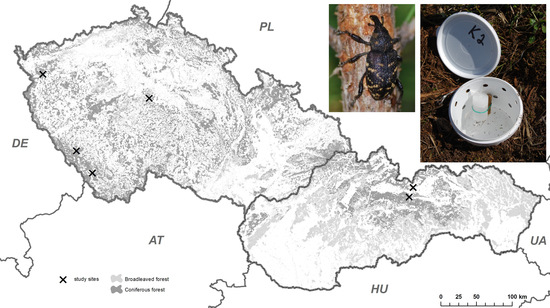