The Performance of REDD+: From Global Governance to Local Practices
Previous Article in Journal

Immediate and Delayed Effects of Severe Winds on an Old-Growth Forest in Kentucky: A Forty-Year Retrospective
Previous Article in Special Issue

Spiders in the Web: Understanding the Evolution of REDD+ in Southwest Ghana

Results-Based Funding (RBF) for Reducing Emissions from Deforestation and Forest Degradation (REDD+) has become an important instrument for channeling financial resources to forest conservation activities. At the same time, much literature on conservation funding is ambiguous about the effectiveness of existing RBF schemes. Many effectiveness evaluations follow a simplified version of the principal-agent model, but in practice, the relation between aid providers and funding recipients is much more complex. As a consequence, intermediary steps of conservation funding are often not accounted for in effectiveness studies. This research paper aims to provide a nuanced understanding of conservation funding by analyzing the allocation of financial resources for one of the largest RBF schemes for REDD+ in the world: the Brazilian Amazon Fund. As part of this analysis, this study has built a dataset of information, with unprecedented detail, on Amazon Fund projects, in order to accurately reconstruct the allocation of financial resources across different stakeholders (i.e., governments, NGOs, research institutions), geographies, and activities. The results show that that the distribution of resources of the Amazon Fund lack a clear strategy that could maximize the results of the fund in terms of deforestation reduction. First, there are evidences that in some cases governmental organizations lack financial additionality for their projects, which renders the growing share of funding to this type of stakeholder particularly worrisome. Second, the Amazon Fund allocations did also not systematically have privileged the municipalities that showed the recent highest deforestation rates. rom the 10 municipalities with the higher deforestation rates in 2017, only 2 are amongst the top 100 receiving per/Ha considering the 775 municipalities from Legal Amazon. Third, the allocation of the financial resources from the Amazon Fund reflects the support of different projects that adopt significantly diverging theories of change, many of which are not primarily concerned with attaining further deforestation reductions. These results reflect the current approach adopted by the Amazon Fund, that do not actively seek areas for intervention, but instead wait for project submissions from proponents. As a consequence, project owners exert much influence on to the type of activities that they support how deforestation reduction is expected to be attained. The article concludes that the Amazon Fund as well as other RBF programs, should evolve over time in order to develop a more targeted funding strategy to maximize the long-term impact in reducing emissions from deforestation. View Full-Text
Keywords: REDD+; Amazon Fund; Results-Based Funding; benefit distribution; resource allocation; climate change funding; effectiveness; forest conservation funding REDD+; Amazon Fund; Results-Based Funding; benefit distribution; resource allocation; climate change funding; effectiveness; forest conservation funding
►▼ Show Figures 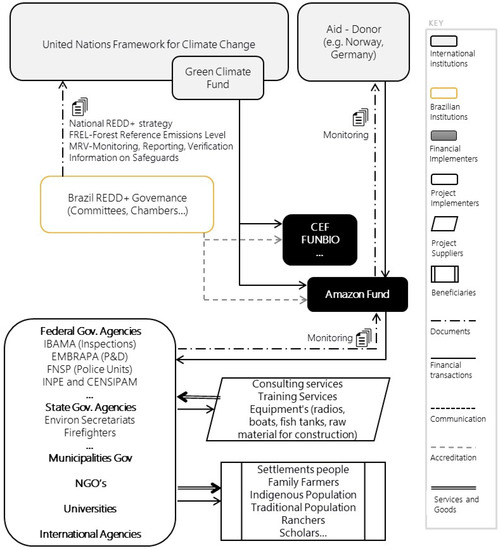