Functional Diversity of the Soil Culturable Microbial Community in Eucalyptus Plantations of Different Ages in Guangxi, South China
Next Article in Special Issue

Identification and Expression of NAC Transcription Factors of Vaccinium corymbosum L. in Response to Drought Stress
Previous Article in Journal

Research Highlights: Taking Chinese dogwood (Cornus kousa subsp. chinensis) as an example, the genetic characteristics of natural populations collected from main a distribution area were evaluated using intersimple sequence repeat (ISSR) markers to reveal the genetic basis for further selection and breeding. Background and Objectives: Chinese dogwood is a small understory tree that is widely distributed in China. Chinese dogwood has attracted interest for its potential horticultural and ornamental values, and its natural resource potential urgently needs to be estimated. Materials and Methods: In this study, the genetic diversity of 12 natural populations collected from six provinces containing 223 individuals was evaluated based on ISSR markers. Results: Relatively high levels of genetic diversity were found at both the population and individual levels. The Shannon’s diversity index (I) among individuals (0.504) was higher than that among populations (0.338). Analysis of molecular variance (AMOVA) revealed that genetic variation mainly existed within populations (61.55%) rather than among populations (38.45%). According to the STRUCTURE analysis, 12 populations were assigned to two groups, i.e., the northern and southern ecological regions, which are separated by the Yangtze River. A Mantel test analysis showed that there was no significant correlation between genetic distance and geographic distance. Conclusions: Considering the breeding system of dogwoods, we speculated that the genetic characteristics of the natural populations of this species would be affected by the dispersal mode of its pollens and seeds; additionally, genetic drift could play an important role in its genetic differentiation. In conclusion, in situ conservation is recommended for Chinese dogwood based on our results. View Full-Text
Keywords: Chinese dogwood (Cornus kousa subsp. chinensis); ISSR; genetic diversity; genetic variation; population structure Chinese dogwood (Cornus kousa subsp. chinensis); ISSR; genetic diversity; genetic variation; population structure
►▼ Show Figures 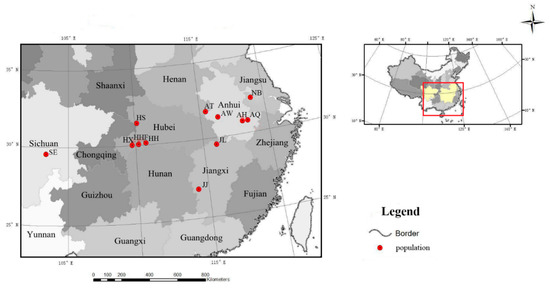