How Long Do Wood Parenchyma Cells Live in the Stem of a Scots Pine (Pinus sylvestris L.)? Studies on Cell Nuclei Status along the Radial and Longitudinal Stem Axes

This paper deals with the spatial distribution of heartwood in Scots pine stems (Pinus sylvestris L.), determined on the basis of the absence of nuclei in parenchyma cells. Samples were collected at several heights from two Scots pine stems growing in fresh coniferous stand as codominant trees. Transverse and radial sections were cut from the samples and stained with acetocarmine to detect the nuclei and with I2KI to show starch grains. Unstained sections were also observed under ultraviolet (UV) light to reveal cell wall lignification. The shapes of the nuclei in ray and axial parenchyma cells differed: the axial parenchyma cells had rounded nuclei, while the nuclei of the ray parenchyma cells were elongated. The lifespan of the parenchyma cells was found to be 16–42 years; the longest-lived were cells from the base of the stem, and the shortest-lived were from the base of the crown. The largest number of growth rings comprising heartwood was observed at a height of 1.3–3.3 m, which signifies that the distribution of heartwood within the stem is uneven. Moreover, the distance of the cells from the apical meristem and the cambium was seen to have an effect on the presence of living parenchyma cells, i.e., those with stained nuclei. View Full-Text
Keywords: axial parenchyma; conifers; heartwood; lignification; nuclei; programmed cell death; ray cells; secondary xylem; tracheids axial parenchyma; conifers; heartwood; lignification; nuclei; programmed cell death; ray cells; secondary xylem; tracheids
►▼ Show Figures 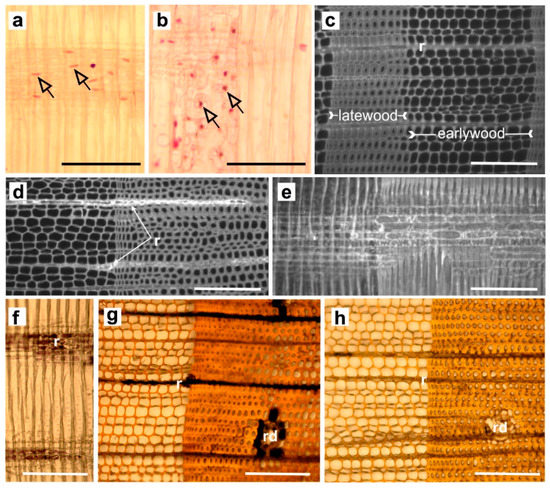