Whitebark Pine in Crater Lake and Lassen Volcanic National Parks: Assessment of Stand Structure and Condition in a Management and Conservation Perspective
Previous Article in Journal

Necromass has a relevant role to play in the carbon stock of forest ecosystems, especially with the increase of tree mortality due to climate change. Despite this importance, its quantification is often neglected in tropical forests. The objective of this study was to quantify the carbon storage in a secondary Atlantic Forest fragment in Viçosa, Minas Gerais, Brazil. Coarse Woody Debris (CWD), standing dead trees (snags), and litter were quantified in twenty 10 m x 50 m plots randomly positioned throughout the forest area (simple random sampling). Data were collected during 2015, from July to December. The CWD and snags volumes were determined by the Smalian method and by allometric equations, respectively. The necromass of these components was estimated by multiplying the volume by the apparent density at each decomposition classes. The litter necromass was estimated by the proportionality method and the average of the extrapolated estimates per hectare. The carbon stock of the three components was quantified by multiplying the necromass and the carbon wood content. The total volume of dead wood, including CWD and snag, was 23.6 ± 0.9 m3 ha−1, being produced mainly by the competition for resources, senescence, and anthropic and climatic disturbances. The total necromass was 16.3 ± 0.4 Mg ha−1. The total carbon stock in necromass was 7.3 ± 0.2 MgC ha−1. The CWD, snag and litter stocked 3.0 ± 0.1, 1.8 ± 0.1, and 2.5 ± 0.1 MgC ha−1, respectively. These results demonstrate that although necromass has a lower carbon stock compared to biomass, neglecting its quantification may lead to underestimation of the carbon balance of forest ecosystems and their potential to mitigate climate change. View Full-Text
Keywords: climate change; coarse woody debris; litter; rainforest; snags; dead organic matter climate change; coarse woody debris; litter; rainforest; snags; dead organic matter
►▼ Show Figures 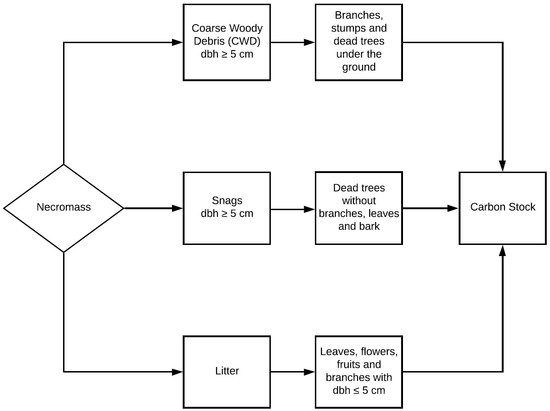