Optimal Learning and Self-Awareness Versus PDI
Previous Article in Journal

:
Signal-to-noise ratio (SNR) estimation is essential in the unmanned aerial vehicle (UAV) orthogonal frequency division multiplexing (OFDM) system for getting accurate channel estimation. In this paper, we propose a novel non-data-aided (NDA) SNR estimation method for UAV OFDM system to overcome the carrier interference caused by the frequency offset. First, an absolute value series is achieved which is based on the sampled received sequence, where each sampling point is validated by the data length apart. Second, by dividing absolute value series into the different series according to the total length of symbol, we obtain an output series by stacking each part. Third, the root mean squares of noise power and total power are estimated by utilizing the maximum and minimum platform in the characteristic curve of the output series after the wavelet denoising. Simulation results show that the proposed method performs better than other methods, especially in the low synchronization precision, and it has low computation complexity.
Keywords:
unmanned aerial vehicle; orthogonal frequency division multiplexing; signal-to-noise ratio; parameter estimation; non data-aided

The UAV OFDM system model is shown in Figure 1. We consider the NDA SNR estimation for UAV OFDM with ground station in multipath propagations. The transmitted OFDM signals can be reflected by the urban barriers, such as buildings, and OFDM subcarrier signal bandwidth is relatively small and generally smaller than channel coherent bandwidth, which belongs to narrowband signal. Thus, multipath channel model can be used as a UAV downlink channel model where the OFDM narrowband signal experiences multiple impulse responses at ground station. The channel impulse response [24] is given as where and L are the the gain of the l-th path and the channel order, respectively. And l-th is assumed to be equal to the maximum delay of the multipath channel.

2.2. The OFDM Model over UAV Channel

In an OFDM system, the mth transmitted signal sample [25] is given by where , is modulated data of the m-th OFDM symbol, N and are the total number of sub-carriers and the size of cyclic prefix (CP), respectively. Suppose are independent and identically distributed random variables.
The OFDM model under UAV channel conditions is shown in Figure 2. To avoid the ISI, L is assumed to be less than . Now supposing that the symbol timing and frequency offset have been synchronized, then the received sampling signal transmitted through multipath channel can be given by where is the step function, represents additive white Gaussian noise (AWGN) with mean 0 and variance and .

Suppose the sample sequence of the received OFDM signal is , where k and are the k-th sampling point and the total number of sampling points, respectively. Provided that the parameters have been estimated accurately and N is the length of the valid signal data. Define as
It is assumed that the frequency offset has been perfectly estimated and compensated without considering the influence of the dispersion channel, then, the received signal are given as where and represent the signal component and noise component of the k-th slot, respectively. According to the characteristics of the OFDM signal with CP, there are two different situations. When , and represent the copied OFDM symbol and CP symbol, respectively. When , and represent two samples from different systems, respectively.
In addition, the transmitted signal, which is composed of a large number of independent information flows, can be accurately modeled as a complex Gaussian process. Since each term of obeys Gaussian distribution, obeys Rayleigh distribution. Suppose that the power of the desired signal is and the noise power is in and the power of the complex Gaussian variable z is , then, (6) can be established.
When , it can be easily proved that is a Gaussian noise with mean zero, variance and the proof process is
Therefore, when , we can get otherwise, when , we obtain provided that is a periodic sequence and its period is the symbol total length. The total length is known before estimating SNR. Divide the sequence according to the symbol total length and stacking each part. This stacking method can get a better statistical result based on little intercepting data. is expressed as where M is the complete intercepted OFDM symbolic number, is the OFDM symbol total length. Therefore, the sequence length of always equals the symbol total length.
Owing to the influence caused by multipath channel, there is a transition part between the maximum and minimum platforms. This part is caused by the CP with ISI. Figure 3 illustrates the characteristic curve of after the fourth-order Haar wavelet denoising. From Figure 3, we observe that the maximum and minimum platforms are attained by utilizing the characteristic curve after the wavelet denoising. There is a minimum platform in the characteristic curve after wavelet denoising, which also exists in the original characteristic minimum platform part. Therefore, this method can not only extract the mean square of the noise power but also can avoid estimating the maximum delay of the multipath channel of the signals. For extracting the maximum platform, first calculate the average of the data sequence after denoising, then all the parts being larger than the average are supposed to be the maximum platform parts.
The maximum platform and the minimum platform extracted by the proposed method are corresponding to the root mean square of real noise power and total power in Figure 3. Hence, the proposed method is effective. In order to use less data and get more accurate results, averaging relative to the minimum and maximum platforms to get the root mean square of the noise power and total power.
The smaller values represents the root mean square of the noise power and the larger values represents the root mean square of the power of the signal plus noise. Define as the maximum values and as the minimum values, then the root mean square of noise power and total signal power root mean square are given by where and are the the root mean square of the noise power and the total signal power, respectively.
Thus, the estimated SNR for UAV OFDM system can be derived from the (11) and (12) as
In conclusion, the steps of the NDA SNR estimation of UAV OFDM are as follows:
Step 1: Sample the received OFDM signals with a sampling sequence and then get a difference sequence , where each point in is valid data length sampling points apart;
Step 2: Divide according to the symbol total length and get an output series by stacking each part. Then, obtain the characteristic curve of after the Haar wavelet denoising and extract the maximum and minimum values platforms and ;
Step 3: Calculate the root mean square of the noise power based on (11);
Step 4: Calculate the root mean square of the total signal power based on (12);
Step 5: Calculate the of UAV OFDM based on (13).

In this section, the effectiveness of the proposed method is verified by simulation. Suppose that the OFDM model is 802.16e OFDM, with the CP of 1/4 and the size of IFFT is 256. The downlink channel of UAV models are SUI-1, GSM TU6 and 9-path fading channel. The gain [25] of each path is
Performance is evaluated in terms of the estimation bias defined as , where is the estimated SNR and SNR is the corresponding input SNR.

Figure 8 describes the comparison between the improved method and the method in Reference [2] under three different multipath channels. The two methods are both effective for exponential fading channel and SUI-1 channel. For TU6 channel, the estimation bias of the method in Reference [2] becomes larger when SNR lies in 5 dB and 18 dB and this characteristic is presented in SUI-1 channel. The main reason is that Reference [2] used the minimum description length (MDL) to estimate the maximum delay in multipath to obtain the non-inter-symbol interference data interval. However, once the delay of multipath channel becomes longer, this method will obtain a large estimation bias under low SNR and thus part of the used data will have the ISI when estimating the SNR. When the SNR is low (less than 2 dB), the bias caused by the inter-symbol interference is not so obvious compared to the noise power, therefore, the SNR estimation bias is not so large. However, when having the middle SNR (between 4 dB and 18 dB), compared to the noise power, the bias caused by ISI becomes larger, thus the estimation bias becomes enlarged. When the SNR is greater than 18 dB, the MDL achieves a higher accuracy when estimating the maximum delay of multipath channel. There is no ISI in the data used to estimate the SNR, as a result, the estimation bias declines again. This problem does not exist in the proposed method due to it does not need to estimate the maximum delay of multipath channel.
Besides, the main computation complexity lies in the wavelet denoising, the computation complexity of the wavelet denoising is , where N is the data length of denoising. In this paper, we have and the computation complexity of [2] is , where . It can be seen clearly from this comparison, the computation complexity of this paper is lower than that of Reference [2]. In conclusion, when the delay of multipath channel is large, the method in Reference [2] are not available enough, while the proposed method is still effective and well-performed with lower complexity. As a result, the proposed method is more suitable for UAV OFDM system than method in Reference [2]. 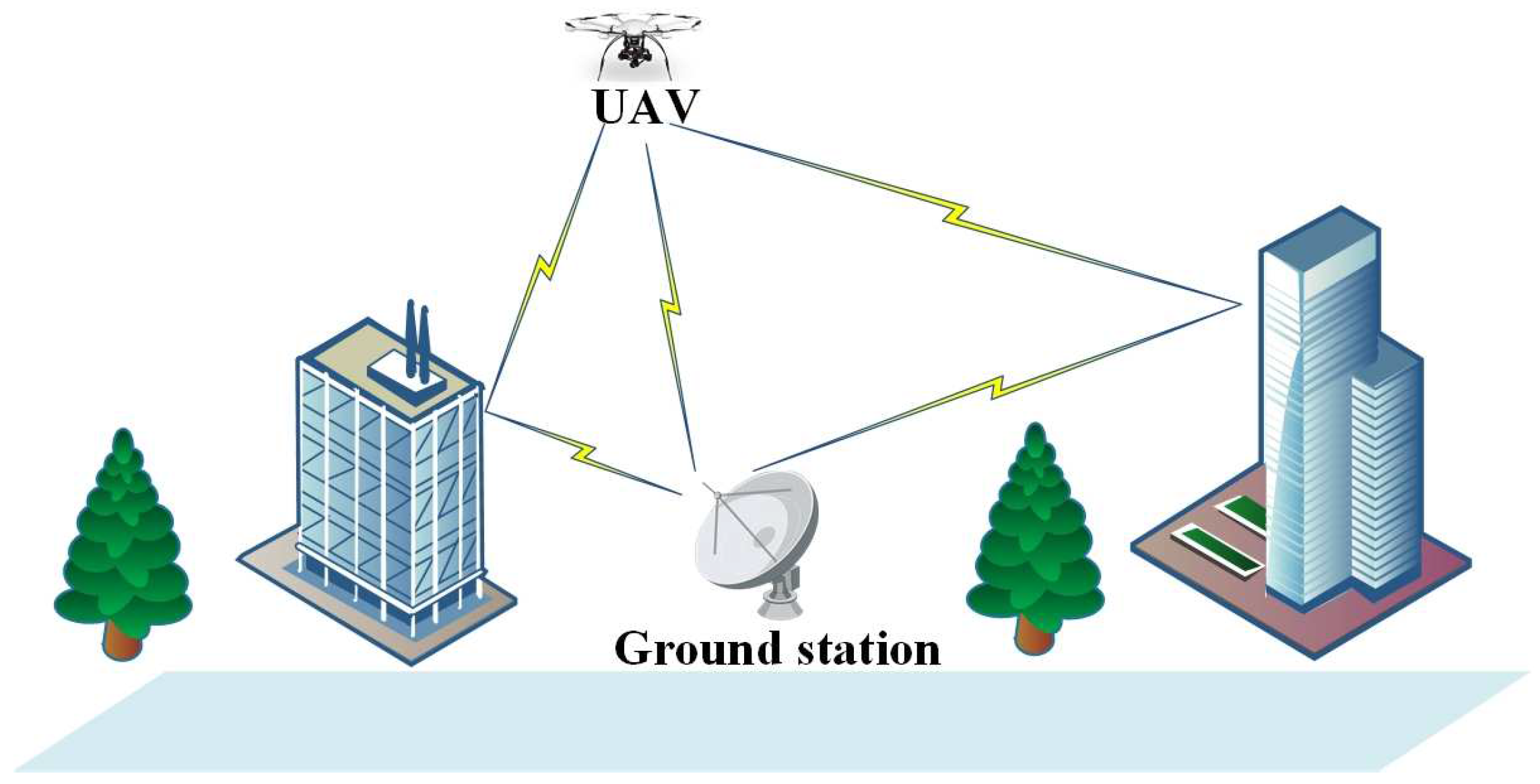 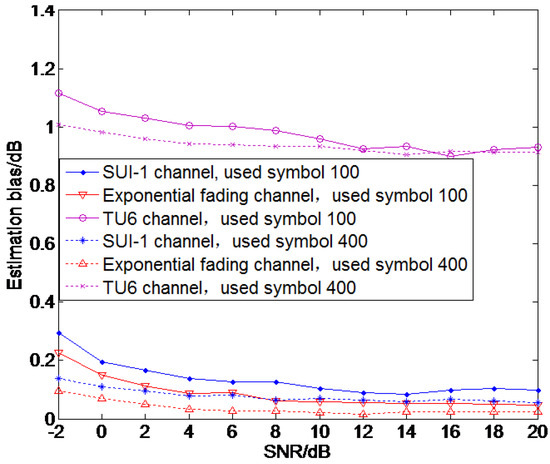 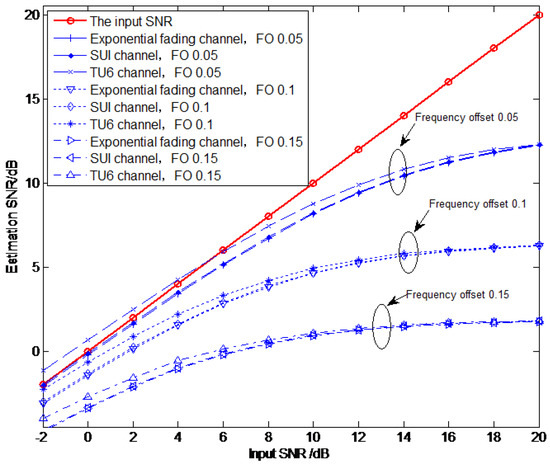 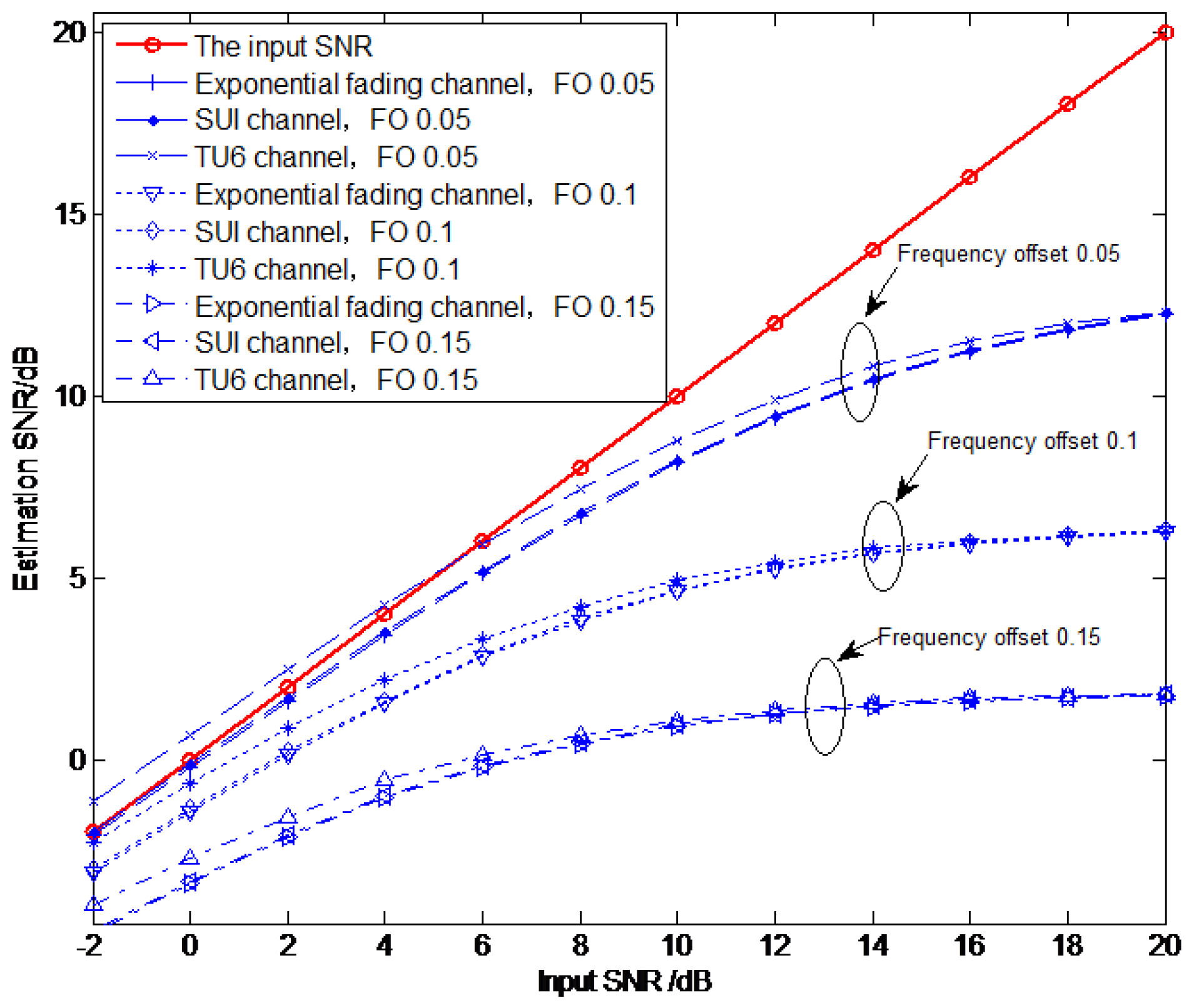 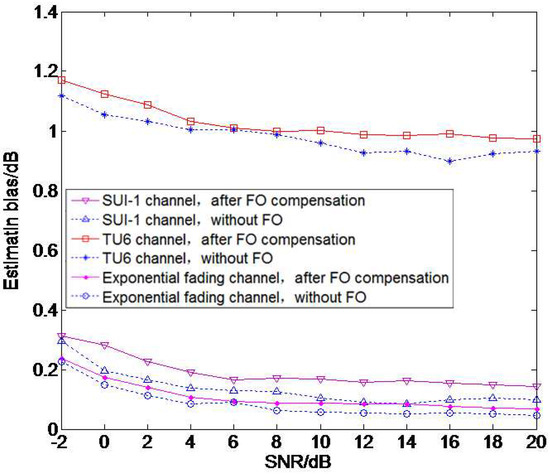 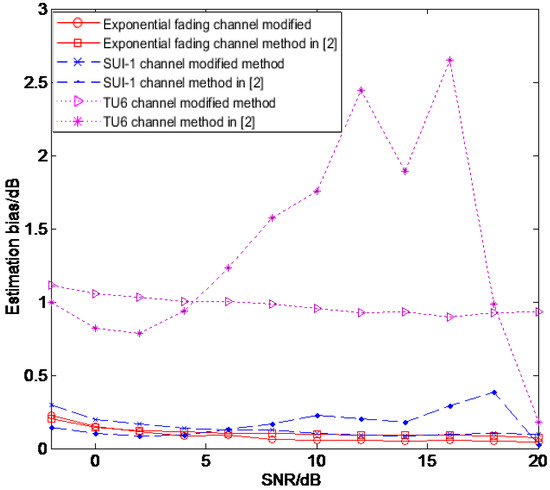