Parameterized Algorithms in Bioinformatics: An Overview
Previous Article in Journal

Pre and Postprocessing for JPEG to Handle Large Monochrome Images

Image compression is one of the most important fields of image processing. Because of the rapid development of image acquisition which will increase the image size, and in turn requires bigger storage space. JPEG has been considered as the most famous and applicable algorithm for image compression; however, it has shortfalls for some image types. Hence, new techniques are required to improve the quality of reconstructed images as well as to increase the compression ratio. The work in this paper introduces a scheme to enhance the JPEG algorithm. The proposed scheme is a new method which shrinks and stretches images using a smooth filter. In order to remove the blurring artifact which would be developed from shrinking and stretching the image, a hyperbolic function (tanh) is used to enhance the quality of the reconstructed image. Furthermore, the new approach achieves higher compression ratio for the same image quality, and/or better image quality for the same compression ratio than ordinary JPEG with respect to large size and more complex content images. However, it is an application for optimization to enhance the quality (PSNR and SSIM), of the reconstructed image and to reduce the size of the compressed image, especially for large size images.
Keywords: image compression; JPEG; hyperbolic function; PSNR; SSIM; compression ratio; optimization image compression; JPEG; hyperbolic function; PSNR; SSIM; compression ratio; optimization

The proposed scheme in this paper represents a simple, yet powerful technique for image compression where the JPEG algorithm is enhanced to achieve better compression ratio (CR), and higher Peak Signal to Noise Ratio (PSNR) and Structural Similarity Index (SSIM) for large size images. This scheme is described in the following:

In this step, we have:

Using the compressed image, the following steps can be performed to reconstruct the principal content for the original image:
The details of the proposed image decompression framework are described in Algorithm 2.

2.4. Quality Analysis of the Proposed Approach

The proposed scheme explained in Section 2 has been conducted on gray scale images, 2 sized , one sized , and three sized . These images are shown in Figure 3a–f, respectively.
To provide objective judgment of the proposed method, two major quality measurements are used. These measurements are the compression ratio (CR), defined as dividing the file size of the original uncompressed image by that of the compressed image [8].
The other measurement is the peak signal to noise ratio (PSNR) given as [8,23]: where g and are the original and reconstructed image pixel value, respectively, and , where X and Y are image dimensions. In addition, Structural Similarity Index (SSIM) is used as a subjective quality measurement for the test images besides the PSNR, SSIM value ranges between 0.0–1.0, where low value means large structural variation, and vice versa [11,22].
Four tests are carried out to show the improvements of the proposed method compared to JPEG compression. In tests (2–4), the standard JPEG algorithm and the proposed compression method are applied to the images given in Figure 3, and different simulations are run. The simulation results for these tests are given in Table 1, Table 2 and Table 3, respectively. Three measurements are considered in each test, these measurements are the image size, PSNR, and CR, for both JPEG and the proposed algorithms. The four tests are organized as:

This test shows the performance of the proposed compression method; however, its procedure steps are done without the JPEG compression part to show the advantage of using the smooth filter with the tanh function to enhance the quality of the constructed image. In this process, noise is added to the original image. Generally, the obtained CR equals 16, while PSNR value is between 28.5–34.5 and SSIM value is between 0.89–0.97. This illustrates that the proposed steps have good PSNR values with improved CR.

In this test, the standard JPEG method and the proposed method are applied to the images shown in Figure 3, and the simulation results are given in Table 1. Here, PSNR values for the six images are adjusted to approximately the same value for the two algorithms, CR and SSIM values are measured and compared.
We observe an improvement in CR in terms of using the proposed algorithm by factor more than 1 (from 1.7 for low quality images to 5.6 for high quality images). Furthermore, the quality of the images is enhanced using the proposed method over JPEG method as listed in Table 1.

In this test, the standard JPEG method and the proposed method are applied to the images shown in Figure 3 and the simulations results are given in Table 2 and are shown in Figure 4. Here, the sizes for the six images are adjusted to approximately the same value for the two algorithms; PSNR and SSIM values are measured and compared.
We observe an improvement in PSNR in terms of the proposed algorithm by 3 dB to 4 dB and 0.1 to 0.17 in SSIM value for the same size. Furthermore, the quality of the images is enhanced using the proposed method over JPEG method as listed in Table 2.

This paper presents a novel approach which enables the JPEG method to compress large monochrome images. This approach improves the PSNR, SSIM, and CR values for the compressed images. Furthermore, for high quality images, it can provide very high CR value as illustrated in Test-4. The proposed scheme uses a smooth filter with the hyperbolic (tanh) function to enhance the quality of the reconstructed image. The proposed method is considered as a stand-alone compression method as shown in Test-1, where CR equals 16. Adding the proposed method to JPEG improved the overall CR value. Furthermore, it improves the edges of the reconstructed images over the standard JPEG approach.
The experimental results show that better performance can be achieved in terms of PSNR, SSIM, CR and visual quality using the proposed method. The CR limit of JPEG is up to 100 times while the limit of the proposed method is higher than 1000 times. For future work, our proposed method could be applied with other image or data compression methods by substituting the JPEG approach with other compression approaches.

We would like to present our thanks to Mustansiriyah university for supporting our experiments in providing us all the necessary data and software. 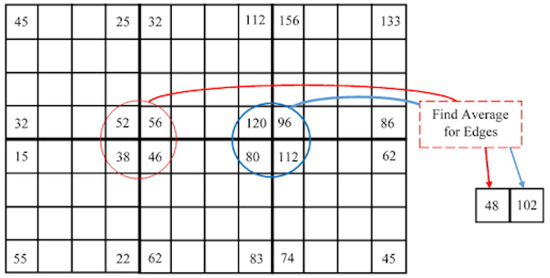 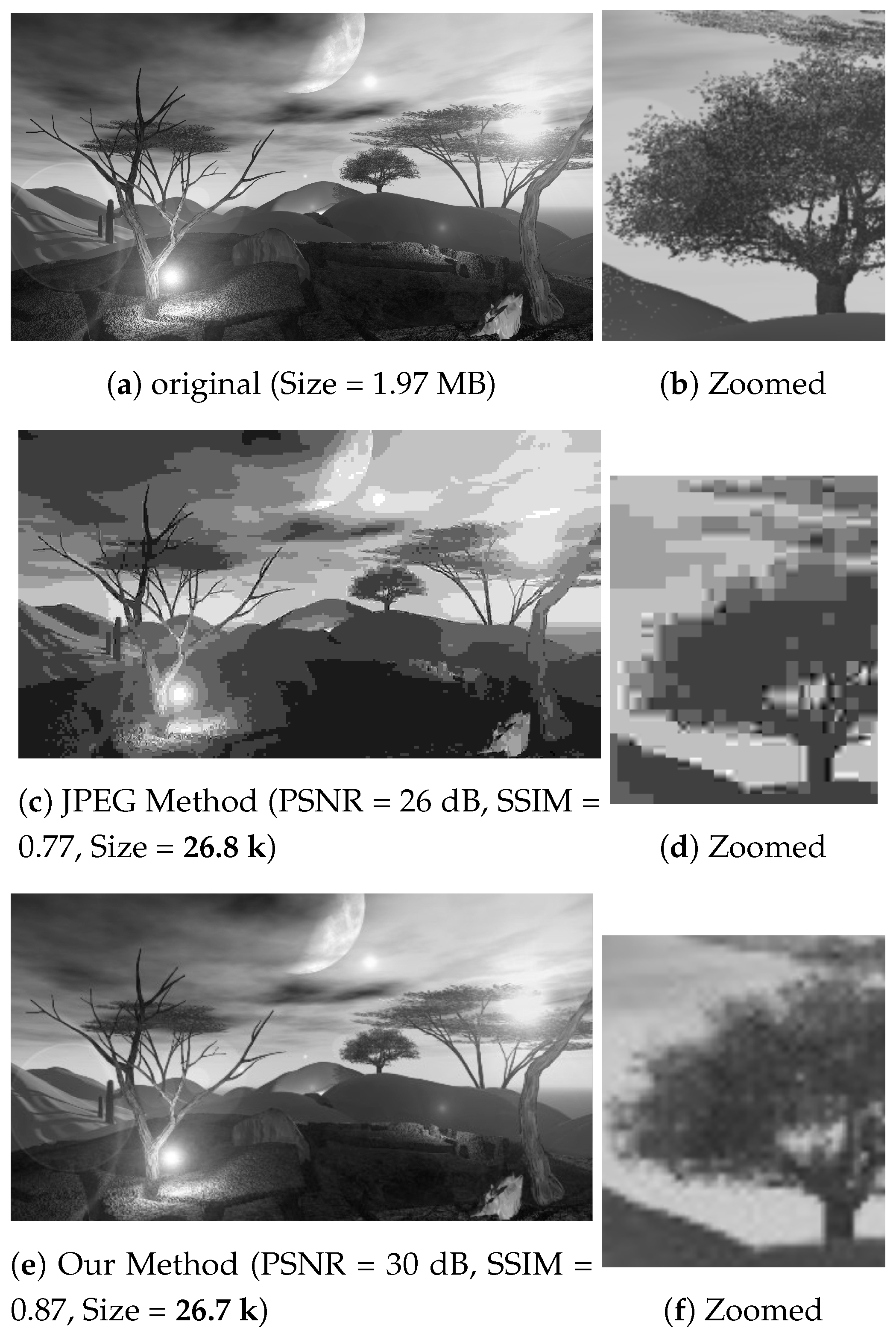 Table 3. Results of Test 3.
Table 3. Results of Test 3.
© 2019 by the authors. Licensee MDPI, Basel, Switzerland. This article is an open access article distributed under the terms and conditions of the Creative Commons Attribution (CC BY) license (http://creativecommons.org/licenses/by/4.0/).
We use cookies on our website to ensure you get the best experience. Read more about our cookies here.
Accept
We have just recently launched a new version of our website. Help us to further improve by taking part in this short 5 minute survey here. here.
Never show this again