:
Dye wastewater severely threatens the environment due to its hazardous and toxic effects. Although many methods are available to degrade dyes, most of them are far from satisfactory. The proposed research provides a green and sustainable approach to degrade an azo dye, methyl orange, by electrically active biofilms (EABs) in the presence of solid and hollow palladium (Pd) nanoparticles. The EABs acted as the electron generator while nanoparticles functioned as the electron carrier agents to enhance degradation rate of the dye by breaking the kinetic barrier. The hollow Pd nanoparticles showed better performance than the solid Pd nanoparticles on the dye degradation, possibly due to high specific surface area and cage effect. The hollow cavities provided by the nanoparticles acted as the reaction centers for the dye degradation.
Keywords:
electrically active biofilm; dye degradation; hollow nanoparticles; catalysis 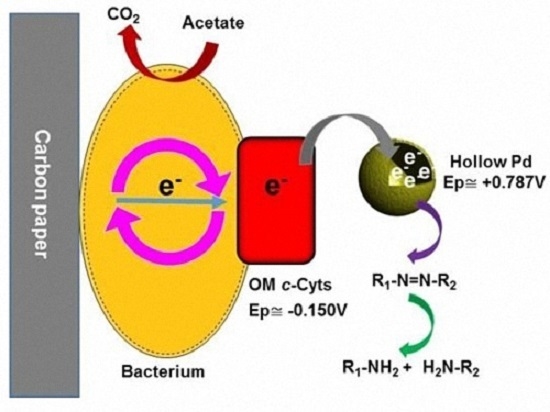 Azo dyes are commonly used in textile industries and the dyes present in textile wastewater severely threaten aquatic life due to their acute toxicity [1,2]. They bio-accumulate in the environment and cause carcinogenic and mutagenic effects in humans [3]. In addition, dyes are recalcitrant molecules, which make it difficult to remove them from wastewater by conventional wastewater treatment processes [3]. Even though many methods, including chemical and biological methods, are available to degrade dyes, most of them are far from satisfactory [1,2,4,5]. In chemical dye degradation, NaBH4 is used as the reducing agent, which causes secondary pollution due to its extreme toxicity [6]. To overcome this chemical toxicity, photodegradation technique is another widely used method for the removal of dyes by using appropriate photocatalyst, either under UV or visible light [7,8]. For this purpose, different kinds of inorganic- or organic-based semiconductors are used by changing parameters like dye or catalyst concentration [9,10,11] for wide varieties of dyes. Major disadvantages of this method are instability of the photocatalysts and incomplete or partial degradation of the dyes [12]. Dye degradation by physical methods such as ultrasound treatments consume high energy and need expensive instrumental set-up [13]. Biodegradation by fungi, bacteria and enzymes are also largely employed to remove dyes from wastewater [5], but the major drawbacks of these biological method are the inherent slow degradation nature and formation of sludge [14]. Electrically active microbes such as Shewanella oneidensis MR-1 can effectively degrade azo dyes extracellularly with the aid of outer-membrane c-type cytochromes (OM c-Cyts) [15]. Electrically active biofilms (EABs) are commonly used in bioelectrochemical systems (BESs) such as microbial fuel cells (MFCs) as living biocatalysts for electricity generation through the substrate oxidation [2,16,17]. In addition, EABs were employed in synthesis of metal nanoparticles and band gap engineering of semiconductors [18,19,20]. Hollow metal nanoparticles are considered outstanding electron transfer catalysts and are largely employed in various catalytic reactions [21,22,23,24,25]. For example, hollow metal nanoparticles exhibit better catalytic activities on oxygen reduction and methanol oxidation than the solid metal nanoparticles [23]. Mahmoud et al. [23] demonstrated that hollow Pd nanoparticles enhanced 4-nitrophenol reduction by NaBH4 over solid Pd nanoparticles. The hollow cavities provided by the nanoparticles acted as the reaction centers due to the cage effect [21,22,23,26]. Here, we employed EABs to degrade methyl orange with hollow Pd nanoparticles as electron transfer agents. The proposed method can be an efficient and green degradation route for the removal of dyes from wastewater through EABs/hollow Pd hybrid system.

Current analysis and CV are considered as powerful tools to investigate the electrochemical activities of biofilms as they can reveal catalytic activities of the EABs [29]. Thus, prior to studying the application EABs for dye degradation, the electrochemical properties of the EABs were analyzed without any catalyst nanoparticles. A gradual increase in the current density was observed after poising a potential and a stable current density of 0.4 mA/cm2 was reached after one week of continuous BES operation (as shown in Figure 4). The current generation is comparable with reported values in BESs [30] and this indicated the well-developed EABs formation on the carbon paper. The CV analysis confirmed the electrochemical activity of as-developed EABs on the carbon paper with an oxidation current (Figure 5). As potential raised above a threshold (around −0.6 V) value, the positive anodic current reflected continuous oxidation of acetate. The peak observed at around ~0.360 V (vs. Ag/AgCl) may be originated from the OM c-Cyts on the EAB (Figure 5) and the CV plot is similar to previous observations found for Geobacter sulfurreducen, the highest electricity producing bacterium till known [29]. Moreover, the appearance of anodic and cathodic peaks may be attributed to pseudo capacitance behavior of OM c-Cyts [31]. As-developed EABs were employed for the MO degradation in presence of hollow or solid Pd nanoparticles.

Bacterial decolorization of dye is considered an extracellular process because of its large size and polarity and OM c-Cyts are believed to be the main contributors for the extracellular dye degradation [15]. The reduction potential of OM c-Cyts is −0.150 V (vs. Ag/AgCl) [36] while for Pd2+/Pd metal is +0.787 (vs. Ag/AgCl) [34]. Here, the reduction potential of the Pd is more positive than the OM c-Cyts, which allowed fluent electron transfer from the OM c-Cyts to the Pd nanoparticles. Eventually, the electrons captured by the Pd nanoparticles reduced the adsorbed dye on the surface of the nanoparticles (Scheme 1). There was no dye degradation in the absence of either EABs or acetate, indicating the inevitable roles of EABs and acetate in the MO degradation (Figure S3). Addition of a biocide (1% glutarldehyde) largely suppressed the MO degradation, which revealed that live biofilm was responsible for the dye degradation (Figure S3). In addition, this observation further confirmed that the dye removals through adsorption by the catalysts and biofilm were negligible.

Electrically active biofilm (EAB) was developed using a three-electrode bioelectrochemical system (BES). Three-electrode BES system is a conventional way to develop EABs on various electrode surfaces [36]. A plain carbon paper (2 × 4 cm2), Pt mesh and Ag/AgCl (Sat. KCl) were used as working, counter and reference electrodes, respectively. Artificial wastewater medium (95 mL) [17] was used as the medium and the medium was purged with N2 for 30 min to make the medium strictly anaerobic. Five milliliters of anaerobic sludge (collected from KAUST wastewater treatment plant) was added to the medium as the bacterial inoculum with acetate (10 mM) as the electron donor. The use of mixed culture consortia is attractive to develop EABs as they are readily obtainable in large quantities and are tolerant to environmental stress and fluctuations [38]. We used acetate as the electron donor as it can induce electrically active microbes [39]. A poising potential of –0.2 V (vs. Ag/AgCl) was applied across the working electrode to drive the bacterial metabolism. The medium was changed (no more inoculum) every two days and the system was continuously operated for 1 week until a stable current was observed.

Before experimental study on the degradation of methyl orange, the catalysts as well as the EABs were characterized by several techniques to analyze the actual properties of these materials. X-ray diffraction (XRD) analyses were performed for solid and hollow catalysts using D8 Venture diffractometer instruments (Bruker Corporation, Bremen, Germany) with scanning rate of 0.03°/s in the 2θ range of 20° to 90° in the form of a layer on the glass plate. TEM analyses of solid and hollow Pd nanoparticles were performed with Titan 80–300 instruments (FEI, Eindhoven, The Netherlands). Alcoholic suspension of these catalysts were sonicated for 15 min in bath sonicator and dropped on the carbon coated Cu grid. The surface area was measured by BET analysis with Tristar II Micromeritics instruments (Micromeritics, Norcross, GA, USA). The samples were degassed overnight at 120 °C prior to analysis.
CV measurement of as-synthesized catalysts was conducted using a three-electrode system. A glassy carbon was used as working electrode (WE), Pt mesh as counter electrode and Ag/AgCl (Sat. KCl) as reference electrode. The WE was prepared by coating solid or hollow Pd nanoparticles onto the glassy carbon disk electrodes. Briefly, samples (5 mg) were dispersed in ethanol (3:2) solution and ultrasonicated for 10 min for uniform mixing. Ten microliters of well-dispersed Pd catalysts were applied onto the glassy carbon disk electrode (5 mm in diameter). After drying at room temperature, 3 µL of Nafion (0.05 wt %) was applied onto the surface of the catalyst layer to form a thin protective film. KOH (1M) was used as the electrolyte. CV analysis of the EABs was also performed using the three-electrode system. After obtaininga stable current by the EABs developed on the carbon paper, CV was performed with a scan rate of 1 mV/s at anaerobic condition as previously reported [29].

As-developed EABs on the carbon paper was dipped in the artificial wastewater medium (100 mL) [17] containing 10 mM acetate (electron donor), 5 mM methyl orange (MO) and 20 mg/L catalyst (hollow or solid Pd nanoparticles). Prior to the EABs dipping, the medium was sonicated for 30 min to make homogeneous dispersion of the catalyst and also the medium was purged with N2 to make the system anaerobic. During the degradation experiment, the medium was kept under a slow magnetic stirring to prevent mass transfer limitation. A control experiment without catalyst (only EABs) was also performed for comparison. To investigate the adsorption activity of the catalysts, an experiment by adding catalyst without dipping the EAB was conducted. The samples were collected every 6 h using a syringe. All experiments were conducted in triplicate and average values were reported. 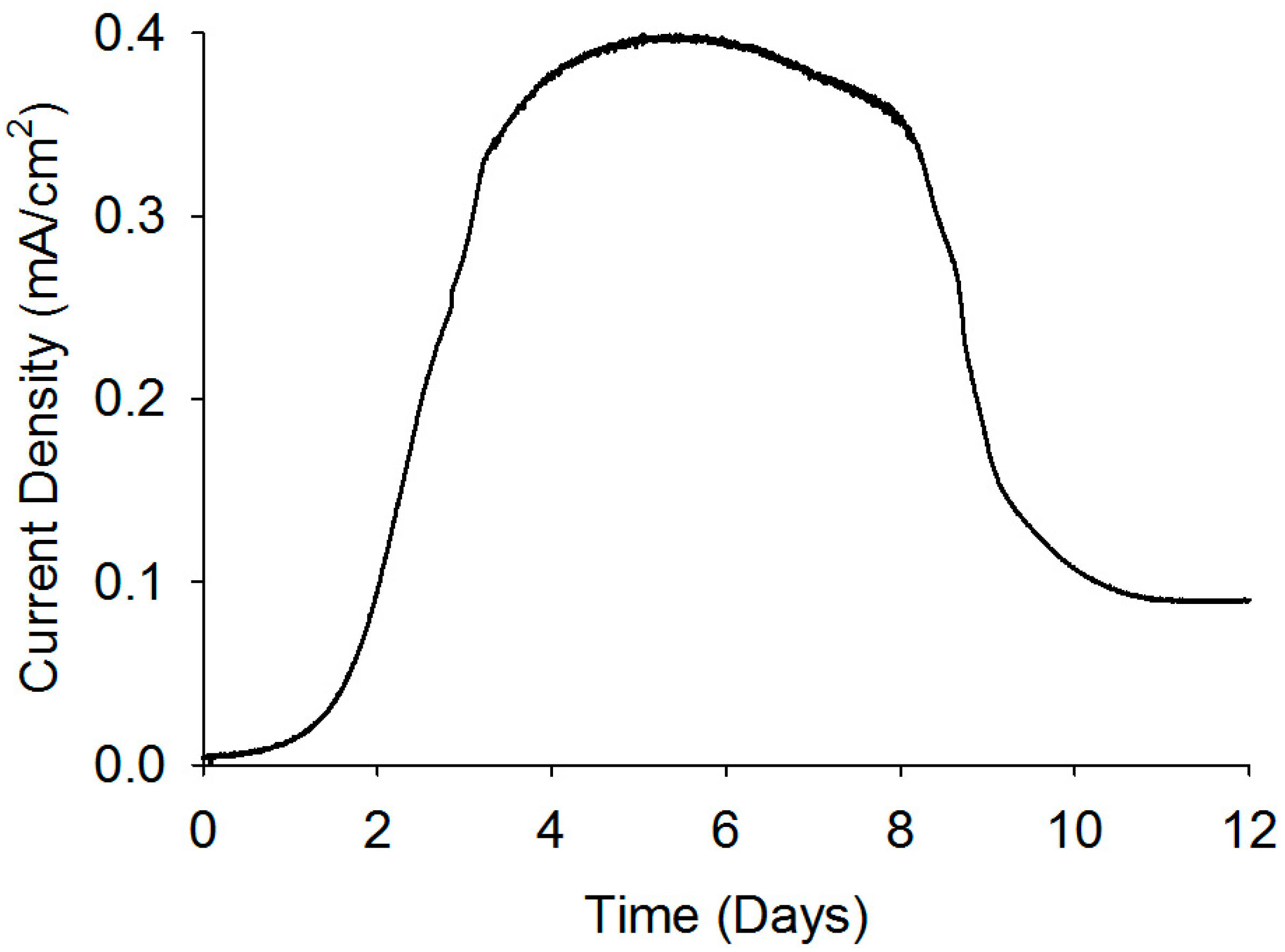 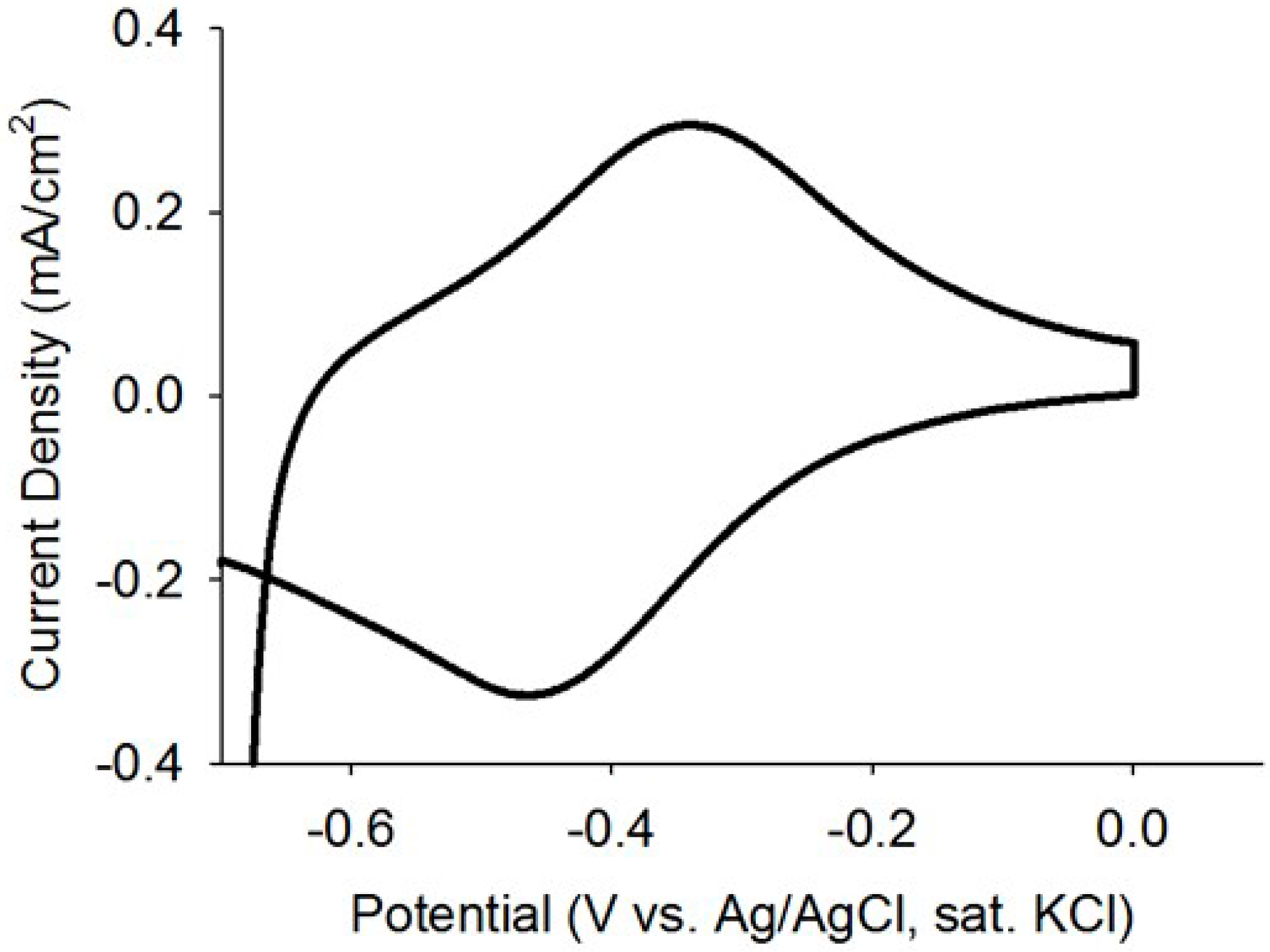 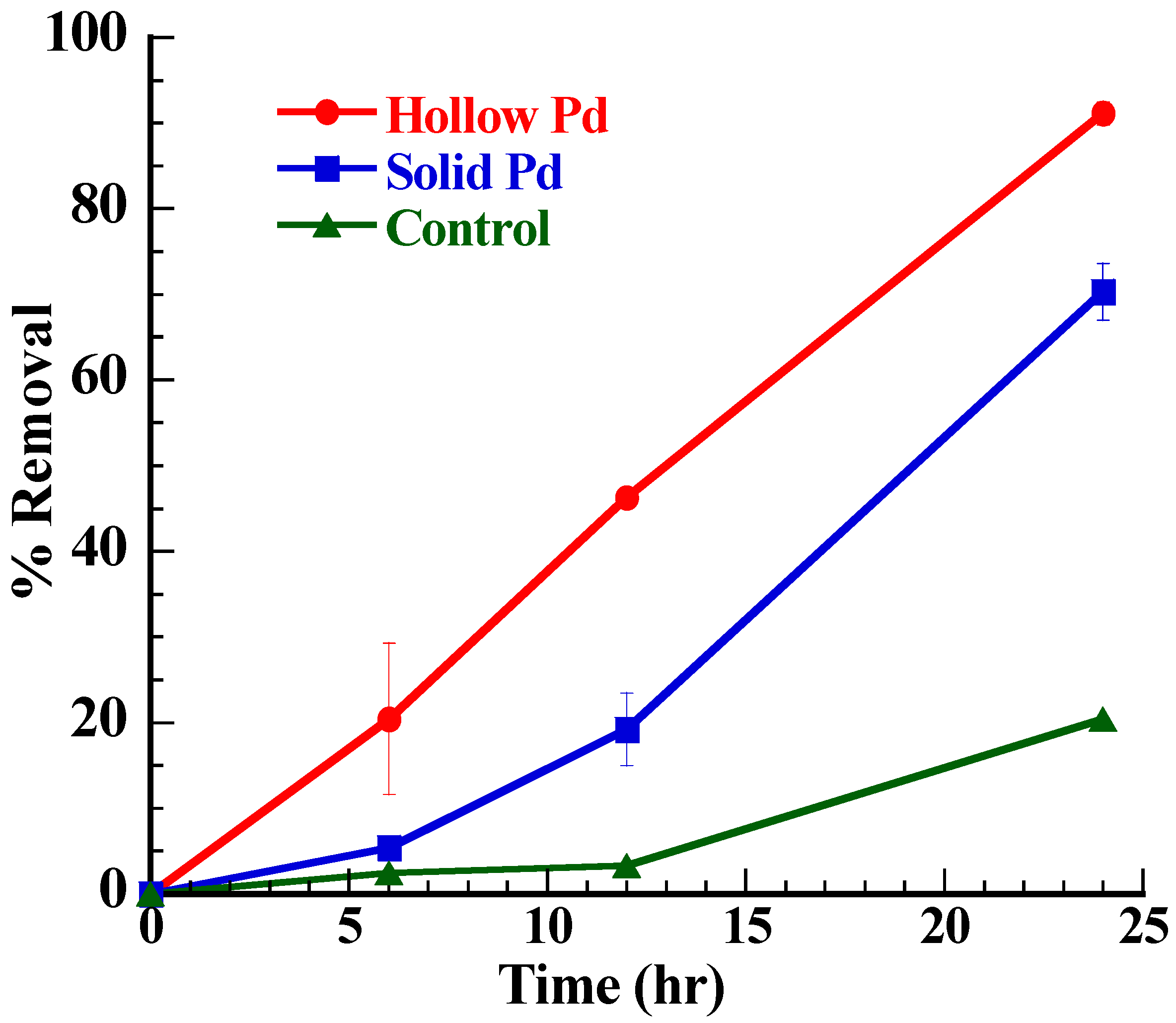