Effect of Extrusion on the Mechanical and Rheological Properties of a Reinforced Poly(Lactic Acid): Reprocessing and Recycling of Biobased Materials
Previous Article in Journal

A new technology was recently developed for municipal solid waste incineration (MSWI) fly ash stabilization, based on the employment of all waste and byproduct materials. In particular, the proposed method is based on the use of amorphous silica contained in rice husk ash (RHA), an agricultural byproduct material (COSMOS-RICE project). The obtained final inert can be applied in several applications to produce “green composites”. In this work, for the first time, a process for pre-treatment of rice husk, before its use in the stabilization of heavy metals, based on the employment of Instant Pressure Drop technology (DIC) was tested. The aim of this work is to verify the influence of the pre-treatment on the efficiency on heavy metals stabilization in the COSMOS-RICE technology. DIC technique is based on a thermomechanical effect induced by an abrupt transition from high steam pressure to a vacuum, to produce changes in the material. Two different DIC pre-treatments were selected and thermal annealing at different temperatures were performed on rice husk. The resulting RHAs were employed to obtain COSMOS-RICE samples, and the stabilization procedure was tested on the MSWI fly ash. In the frame of this work, some thermal treatments were also realized in O2-limiting conditions, to test the effect of charcoal obtained from RHA on the stabilization procedure. The results of this work show that the application of DIC technology into existing treatment cycles of some waste materials should be investigated in more details to offer the possibility to stabilize and reuse waste. View Full-Text
Keywords: fly ash; rice husk ash; DIC; heavy metals stabilization; COSMOS-RICE fly ash; rice husk ash; DIC; heavy metals stabilization; COSMOS-RICE
►▼ Show Figures 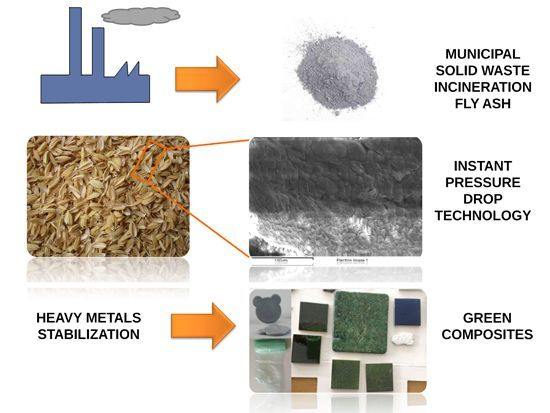