This study presents the results of research on cement mortars amended with two zinc oxides obtained by two different methods: hydrothermal ZnO-H and microwave ZnO-M. Our work indicates that, in contrast to spherical ZnO-H, ZnO-M was characterized by a columnar particle habit with a BET surface area of 8 m2/g, which was four times higher than that obtained for hydrothermally obtained zinc oxide. In addition, ZnO-M induced much better antimicrobial resistance, which was also reported in cement mortar with this oxide. Both zinc oxides showed very good photocatalytic properties, as demonstrated by the 4-chlorophenol degradation test. The reaction efficiency was high, reaching the level of 90%. However, zinc oxides significantly delayed the cement binder setting: ZnO-H by 430 min and ZnO-M by 380 min. This in turn affected the increments in compressive strength of the produced mortars. No significant change in compressive strength was observed on the first day of setting, while significant changes in the strengths of mortars with both zinc oxides were observed later after 7 and 28 days of hardening. As of these times, the compressive strengths were about 13–15.5% and 12–13% higher than the corresponding values for the reference mortar, respectively, for ZnO-H and ZnO-M. There were no significant changes in plasticity and flexural strength of mortars amended with both zinc oxides. View Full-Text
Keywords: zinc oxide; cement composite; antibacterial test; strength test zinc oxide; cement composite; antibacterial test; strength test
►▼ Show Figures 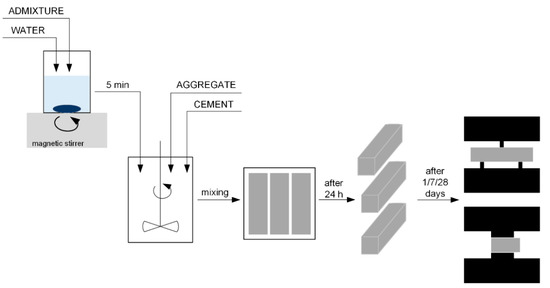