:
Iodine-doped graphene oxide is attracting great attention as fuel cell (FC) electrocatalysts with a high activity for the oxygen reduction reaction (ORR). However, most of the reported preparation techniques for iodine-doped graphene (I/rGO) could be transposed into practice as multiple step procedures, a significant disadvantage for scale-up applications. Herein, we describe an effective, eco-friendly, and fast technique for synthesis by a microwave-tuned one-stage technique. Structural and morphological characterizations evidenced the obtaining of nanocomposite sheets, with iodine bonded in the graphene matrix. The ORR performance of I/rGO was electrochemically investigated and the enhancement of the cathodic peak was noted. Based on the noteworthy electrochemical properties for ORR activity, the prepared I/rGO can be considered an encouraging alternative for a more economical electrode for fuel cell fabrication and commercialization. In this perspective, the iodine-based catalysts synthesis can be considered a step forward for the metal-free electrocatalysts development for the oxygen reduction reaction in fuel cells.
Keywords:
graphene; iodine-doped graphene; fuel cells 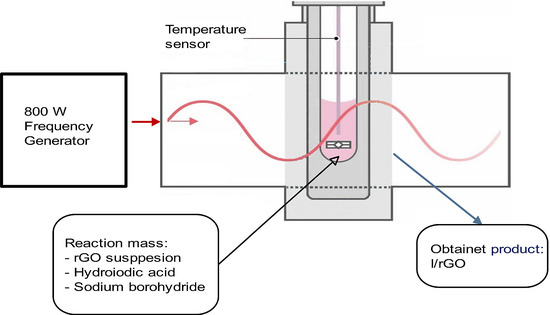 The volatiles from the commercial graphene oxide (GO) powder (Abalonix, Norway) were removed by degassing at 110 °C. GO was then was added into demineralized water (DW) and stirred for 15 min. The hydroiodic acid (HI) (Sigma-Aldrich, St. Louis, MO, USA, 55 wt.%) was completed and the solution was mixed by 10 min sonication. This compound was further reduced with sodium borohydride (NaBH4, Scharlau, 98%), and the reaction mixture was ultrasonicated (80 Hz) for 10 min. The obtained solution was spilled in the microwave reactor (MARS 6 One touch, CEM) cylindrical vessels. The single-stage microwave (MW) iodine-doping process parameters, in terms of temperature and reaction time, were optimized for mild conditions: atmospheric pressure, temperature 40–60 °C, power 800 W, and reaction time 15 min. The product was chilled moderately to room temperature. The obtained black solid was separated by ultracentrifugation, and then, alternately, washed using DW and ethanol (Chimreactiv, 99.5%). Finally, the product was dried by lyophilization.
The original and economical iodine graphene doping method presented in this paper consisted of: utilization of commercial GO, HI as iodine source, and NaBH4 as reducing agent in mild reaction environment in the MW field.

X-ray photoelectron spectroscopy (XPS) characterization was done using the X-ray photoelectron spectrometer (PHI-5000 VersaProbe, PHI-Ulvac/Physical Electronics). XPS spectra were measured using monochromatic Al Kα radiation (1486.7 eV). The qualitative elemental analysis was undertaken by recording the broad spectra, and the identification of the different types of chemical bonds that are formed on the surface was obtained from the high-resolution spectra deconvolution. The PHI-MultiPak software was used for the XPS spectra interpretation. The quantitative elemental analysis in terms of chemical elements atomic concentration was performed by calculating the peak areas by considering the sensitivity factors of the analyzed elements. The yield of iodine was 95 ± 2% based on XPS analysis data of three separately prepared samples. Microstructural investigation and elemental analysis were performed using a Carl Zeiss FEG SEM equipped with an EDX system. The I/rGO powder was transferred for SEM investigation on a double-sticky carbon tape and the surplus was blown with compressed air. The specific surface area of the I/rGO samples was measured by Brunauer–Emmett–Teller (BET) method, using AutosorbIQ (Quantachrome). BET technique is generally consecrated method to estimate the specific surface area (SBET) involving the nitrogen adsorption measurements at 77 K. The adsorption–desorption isotherms were obtained in low-pressure nitrogen atmosphere. Prior to the BET analysis, the I/rGO powder humidity was eliminated under vacuum outgassing at 388 K, for 240 min. The pore size distribution and total pore volume were calculated by Barrett–Joyner–Halenda (BJH) method and was applied to evaluate the porous surface of iodine-doped graphene as well as of starting graphene oxide. The mass changes with temperature of the reduced graphene oxide (rGO) and iodine-doped samples (I/rGO), respectively, were studied by thermogravimetric analysis (TGA) using TGA-DSC e NETZCH STA 449 F5 Jupiter system. The TGA measurements were done in air flow, in the temperature domain of 27–1000 °C, heating the sample with a rate of 2 K min−1. In order to prove the iodine doping of the reduced graphene oxide support, ATR-FTIR method was used. The Frontier FT-NIR spectrometer was used for the attenuated total reflectance Fourier-transform infrared spectroscopy (ATR-FTIR) characterization. The infrared spectra were recorded in transmittance, in domain of 650–4000 cm−1.

Oxygen reduction reaction (ORR) of the iridium-doped samples (I/rGO) was measured in comparison with non-doped reduced graphene (rGO). The measurements were carried out in commercial glass cell with three electrodes using a 2273 potentiostat (Princeton Applied Research). A controlled speed OrigaTrod rotating disk electrode (RDE) with 0.196 cm2 glassy carbon (GC) disk was used as working electrode (WE). A 3 M Ag/AgCl (Metrohm) was used as reference electrode (RE) and a platinum wire as counter electrode (CE). All the measurements were done alkaline electrolyte (0.1 M KOH) that was flushed with oxygen for one hour before each experiment. The pH of our 0.1 M KOH aqueous electrolyte in which KOH salt is dissolved is 13, that means a strong base solution. This electrolyte concentration (pH) is commonly used for the catalysts’ electrochemical properties characterization (ORR, OER HER, and HOR), and it was chosen according to the most published papers in the domain. The potential presented in this work are versus Ag/AgCl RE. The catalyst aliquot was prepared by stirring overnight 5 mg rGO-based powder together with 240 µL isopropyl alcohol, 10 µL DW, and 20 µL 5 wt.% Nafion® solution. For measurements, 7 µL of catalyst solution was deposited onto GC surface, that was previously polished with alumina and diamond paste, cleaned with demineralized water and dried in air.
In order to calculate the number of electrons (n) transferred during the ORR process, linear sweep voltammograms were recorded with 5 mV/s, between 0.4 V and −0.7 V and at various rotation speeds (ω) (among 250–1000 rpm). Linear sweep voltammetry (LSV) curves for I/rGO were plotted as j, which is the measured current density (mA−1 cm2geo) vs. ω−1/2 (rad s−1)−1/2 and studied following Koutecky–Levich (KL) Equations (1)–(3) [15,16,17]. where: jL—maximum (limiting) current density required to achieve ORR reaction (A cm−2); jk—kinetics current density (A cm−2); F—Faraday constant (96.485 kCmol−1); A—area of the RDE electrode (0.196 cm2); C0—concentration of oxygen (1.2 × 10−6 mol cm−3) in 0.1 M KOH electrolyte; D0—diffusion coefficient of oxygen in the electrolyte (1.9 × 10−5 cm2 s−1); ν—kinematic viscosity (0.01 cm2 s−1) in 0.1 M KOH; and k—the rate constant (cm s−1) for the electron transfer [16,17].

This work indicates that starting from a commercially accessible material—graphene oxide—through a specially designed process for chemical synthesis in the microwave field, iodine-doped graphene with specific morphological and structural properties could be obtained. The single-stage microwave (MW) iodine-doping process parameters in terms of temperature and reaction time, were optimized for mild conditions: atmospheric pressure, a temperature of 40–60 °C, a power of 800 W, a reaction time of 15 min, and a doping concentration of 1.3 wt.% was obtained. Cycling voltammetry and rotation disk electrode polarization methods were employed to study the I/rGO electrocatalytic activity with regard to the ORR. The good ORR activity of the I/rGO probe can be explained by the iodine doping of the rGO matrix, promoted by the formation of load transfer complexes (I3− and I5−) that increase the functionalization capacity of the graphene support. Developing a green chemistry method to prepare I/rGO using MW could be a step forward in obtaining affordable electrodes with ORR activity.

Conceptualization, A.M.; methodology, A.M.; writing—original draft, A.M. and D.I.-E.; investigation, A.M., D.I.-E., A.S. and M.R.; writing—review and editing, A.M., D.I.-E. and M.R. All authors have read and agreed to the published version of the manuscript.

The authors wish to thank to our colleague Elena Marin and Elena Georgescu for their valuable help in the synthesis procedure. 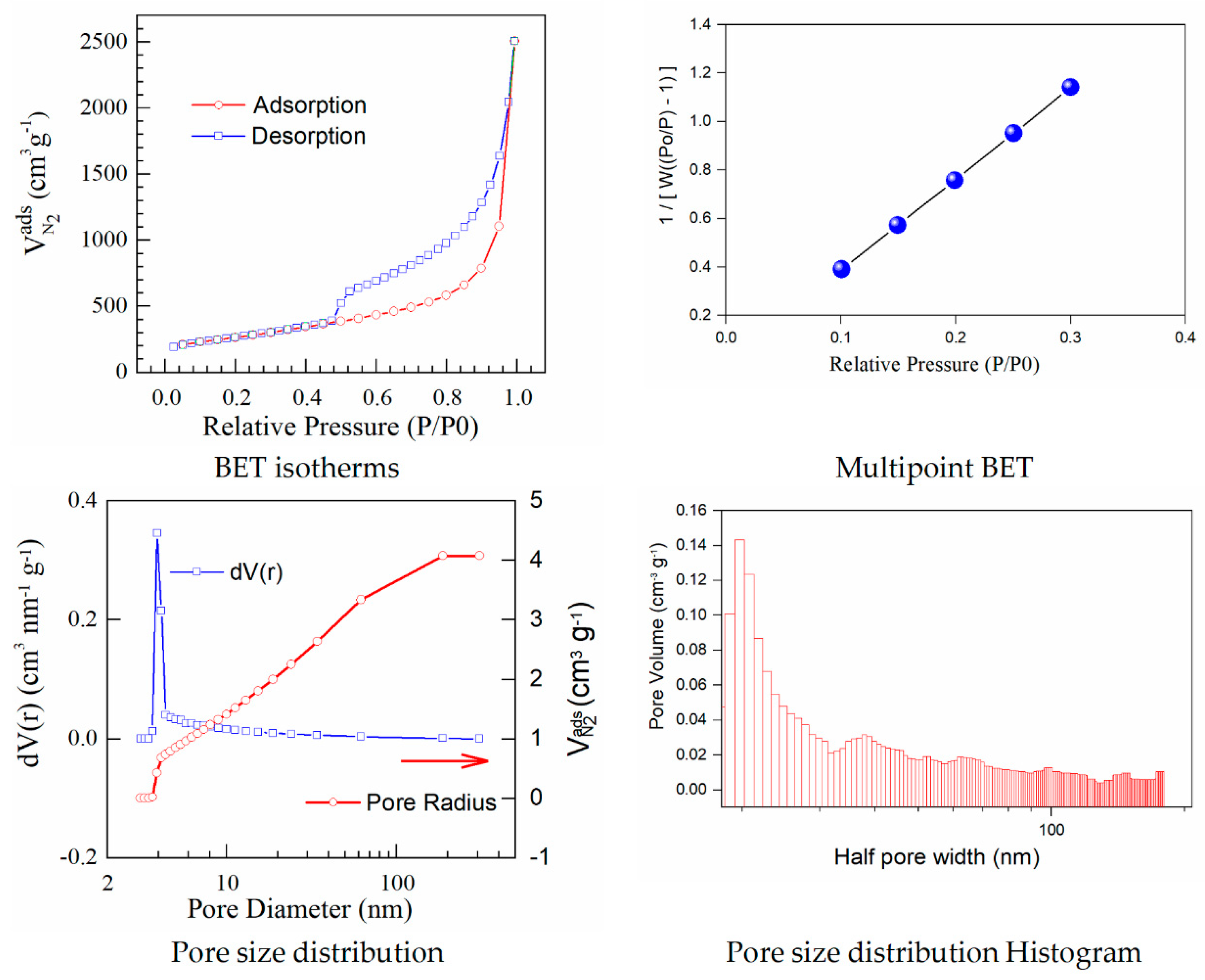 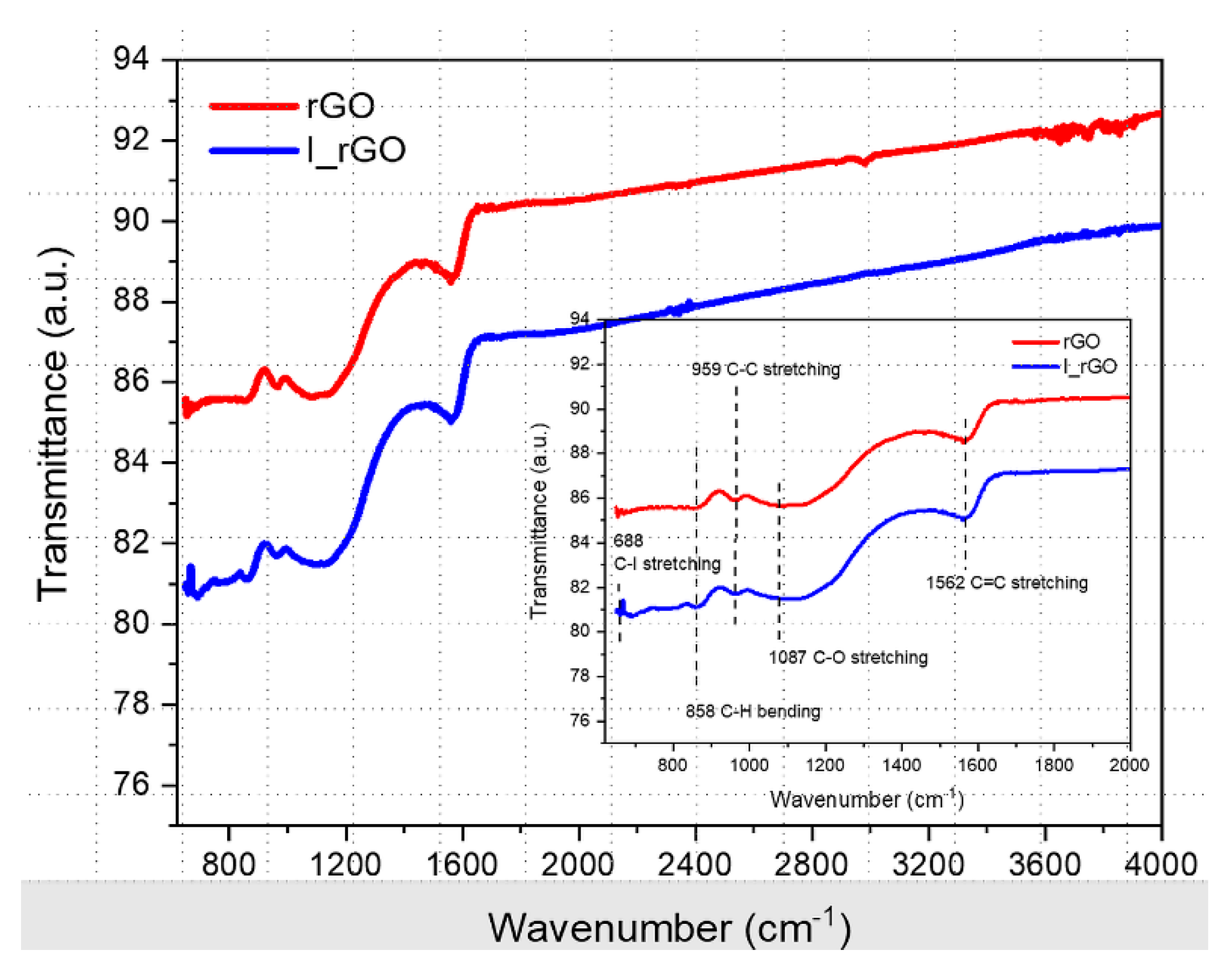 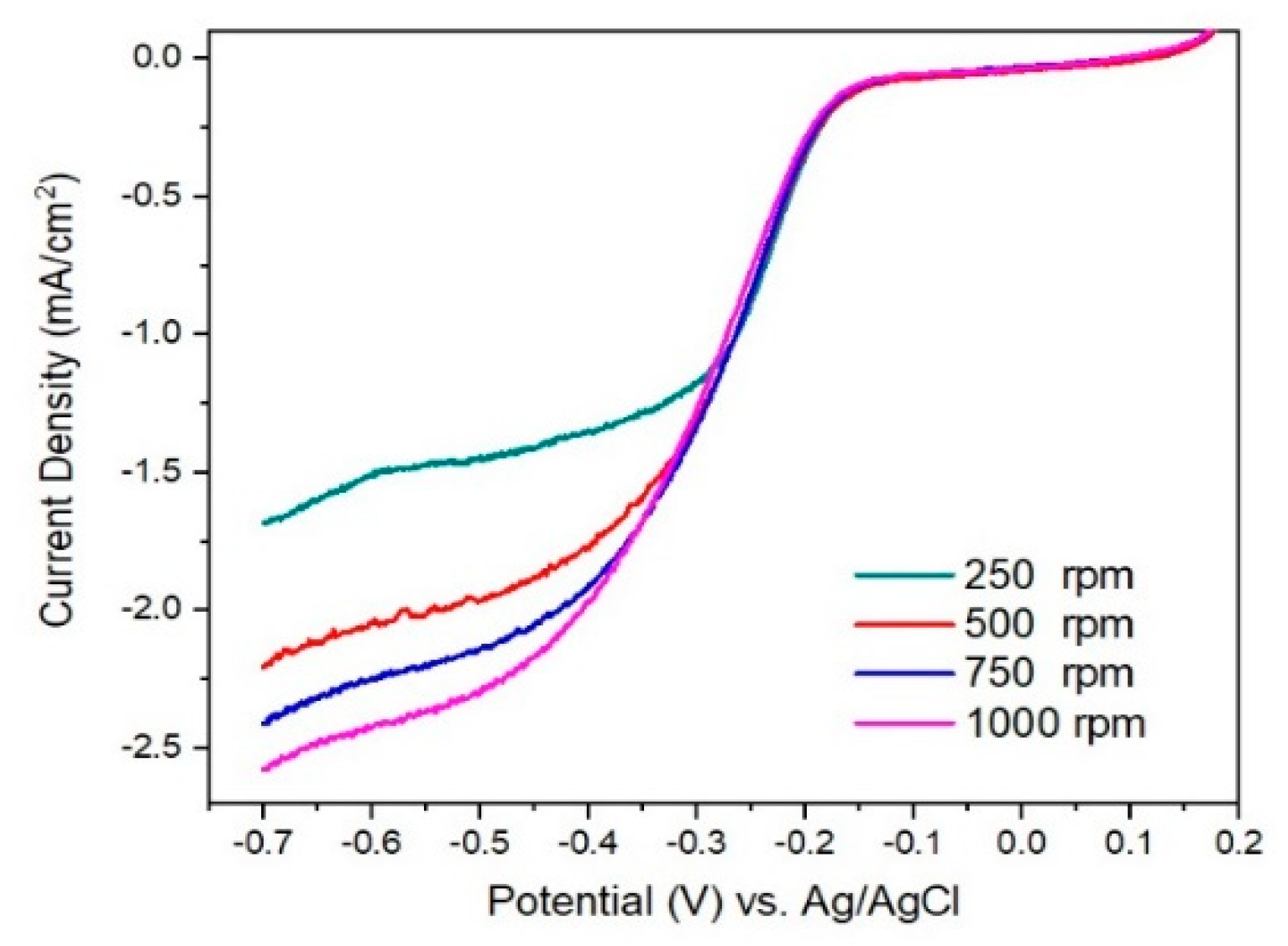 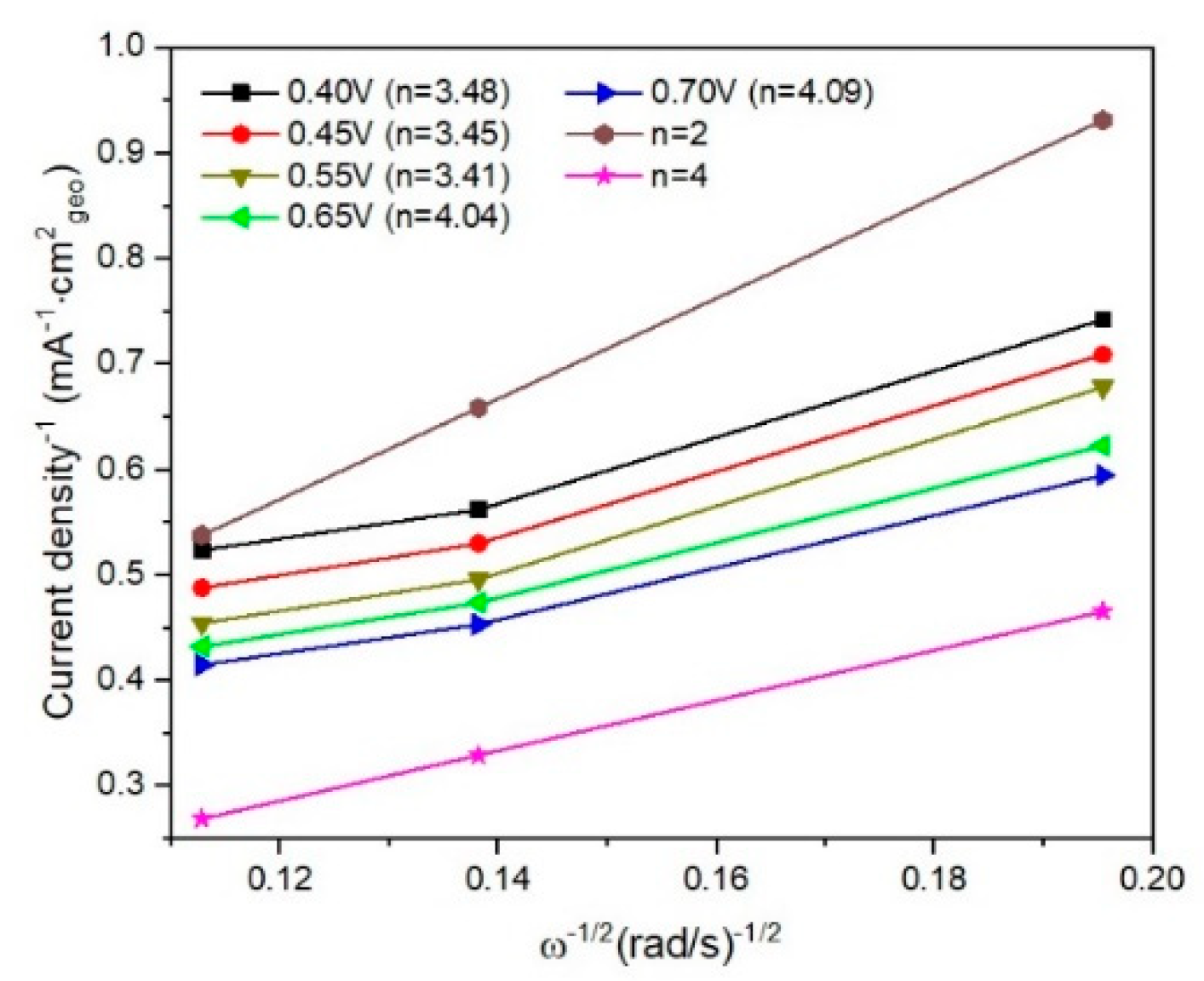